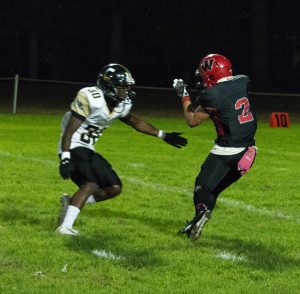 WESTFIELD – For one quarter, the Westfield High School football team held Central scoreless. The Golden Eagles swooped ahead though in the second, third, and fourth quarters to sack the Bombers 40-6 Friday night at Bullens Field.
Aaron-Moses Williams led the Central attack, passing for four touchdowns – two to Leonard Bass and two to Chauncy Cogell – and ran one in.
Trot Gosselin tallied a late score for Westfield when Gosselin connected with Baley Collier on a 19-yard TD pass.
With the win, Central improved to 4-2. Westfield fell to 0-5.

GIRLS’ SOCCER
Bombers double up Lions
Westfield 4, Ludlow 2
Westfield scored two goals in each half en route to doubling up Ludlow on the road.
Chandler Pedolzky scored two goals – one each from Ellen Jury and Mackenzie Liptak – and Bella Rinaldi and Liptak (from Jury) had one apiece for Westfield.

Saints rally
Pathfinder 1, St. Mary’s 0
St. Mary’s fell just shot in their attempt to knock off first place Pathfinder. The Saints had numerous chances, including a late flurry in the second half, but the ball stayed perilously out of the net.
St. Mary’s suffered a bit of misfortune as well when a potential goal was taken off the board by a controversial call. Allie Goodreau appeared to have scored off a great feed from Erin Olearcek, but the referee felt the goalie had been run into and goal was wiped out.
“I am proud of the girls,” St. Mary’s coach Patrick Olearcek said. “That Pathfinder team is deep and experienced and we went toe-to-toe with them. We just seem to get some bad breaks and our shots were just a bit off, but our effort was outstanding.”
St. Mary’s goalie Jess Crosby finished with 21 saves.
Caroline Leahy, Madie Donais, and Mary Turbolski also had strong games for the Saints.

Gators hit road block
Hopkins Academy 1, Gateway 0
Leah Picard snuck a ball into the Gateway net, past a diving goalie in the 25th minute for the game’s only goal and Hopkins held off Jessica Van Heynigen and the visiting Gators.