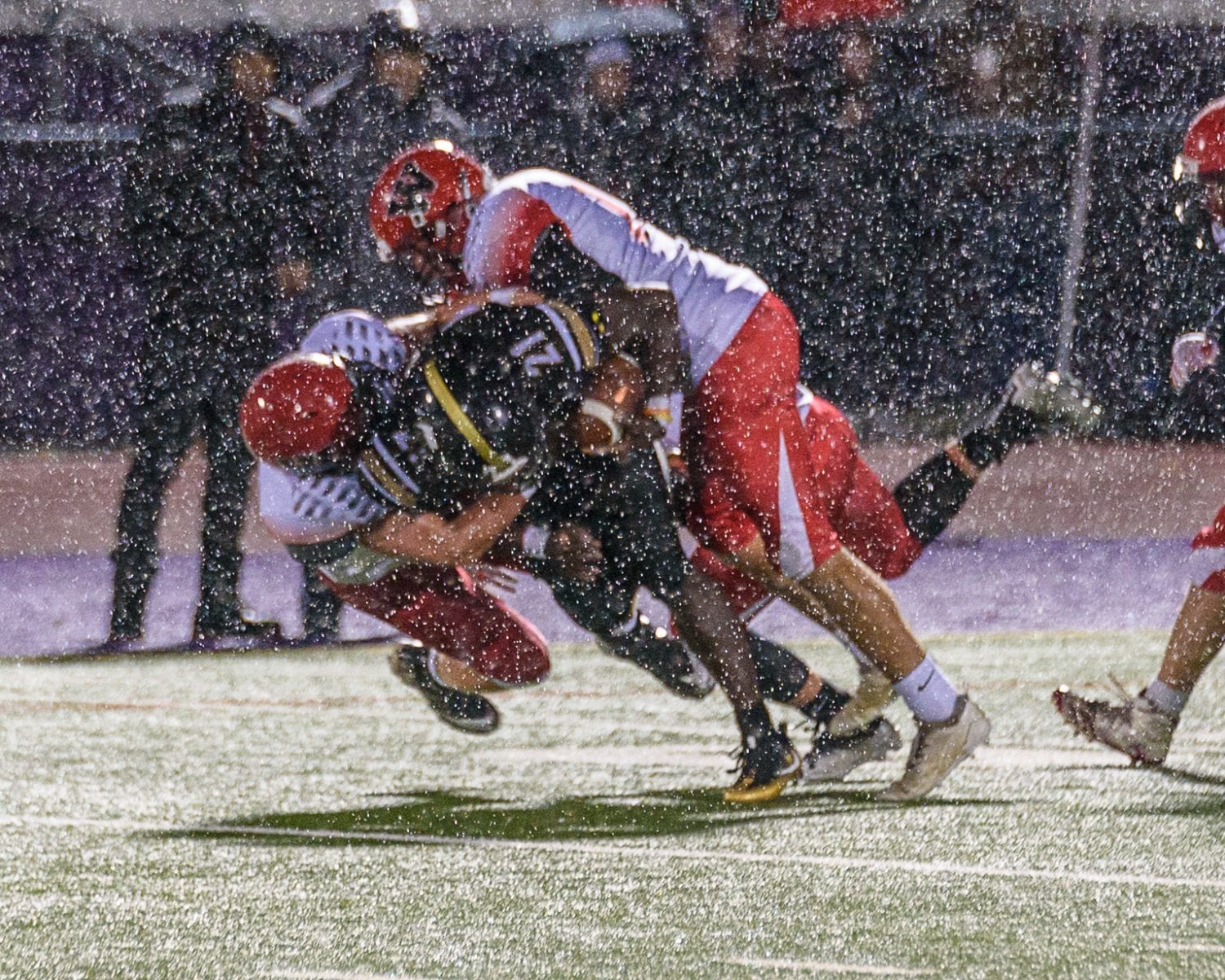 HOLYOKE – Some might say the weather at Friday night’s West Division 3 football championship might be for the birds, but even most of those flying vertebrates are likely long gone – all except for the Golden Eagles, of course.
Mother Nature and the Central High School football team rained on Westfield’s championship parade as the top-seeded Golden Eagles splashed the No. 3 Bombers 22-0 in a raw, rain-soaked finals affair at Holyoke High’s Roberts Field. 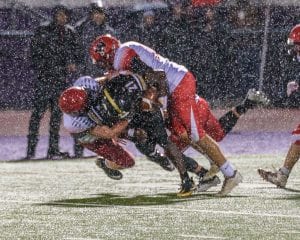 The Westfield defensive line brings down a Central runner as the rain pours down during the West Division 3 football finals Friday night at Holyoke High’s Roberts Field. (Photo by Marc St. Onge)

“You have to be balanced to beat these guys,” Westfield High School football head coach Rob Parent said. “You’ve got to be able to throw the ball, and given the conditions, neither team could really throw the ball.
“If you’re going to beat these guys, you’ve got to be able to try and press the edges. …You can’t be one-dimensional. They’re so good up front, they’re so fast.”
“Both teams had to play in these conditions, and they outplayed us tonight.”
Westfield had a fleeting chance at the outset of the game. The Bombers stuffed the Golden Eagles for no gain on three straight plays.
Westfield’s first drive was over in a heartbeat though as Central intercepted the ball off a deflected pass on the Bombers’ first play from scrimmage.
“Early in the game, you get the stop, you get the ball, chance to do something with it … and we just didn’t take advantage of the opportunities,” coach Parent said.
Central dominated time of possession on its second drive of the game. The Golden Eagles chewed up more than six minutes as the rain picked up in intensity, and took the ball into the end zone before consecutive unsportsmanlike penalties took them out of scoring range. The possession ended with Westfield senior Baley Collier securing an interception in the end zone.
A battle of field position ensued over the course of the next several minutes with Central blocking a punt, and both teams exchanging punts.
The first score of the game finally came with 4:45 remaining in the second quarter when junior running back Kwame Kyles steered ahead 45 yards in a driving rain for a touchdown.
Kyles scored again with 20 seconds left in the half, punching the ball over the goal line from one yard out for a 13-0 lead.
A second half turnaround washed away in the deluge.
Westfield suffered a bit of misfortune on the opening drive of the second half. The Bombers mistakenly took a knee for a safety trying to field a poor snap on a punt.
Central came right down and scored with junior quarterback Mahari Miller connecting with senior running back Cqari Bacote for a 15-yard TD pass. The score came with 7:51 remaining, making it 22-0.
“(The rain) limited the passing for both teams,” Collier said. “It came down to old school football, running up the middle, and they came out on top. We fought as much as we could.”
Coach Parent gave credit to his team for battling all 44 minutes, and praised the opposition for their fight.
“I’ve got to imagine with the depth that they have, and the amount of athletes that they have – they come at you in waves – (that) there’s not many programs out here in our area, even Central Mass., that have that type of depth,” Parent said. “They’re an amazing team.”
There is still one task ahead of Westfield – a Thanksgiving Day re-match with the Minnechaug Falcons.
Westfield lost a heartbreaker to Minnechaug in the inaugural holiday matchup last season, 19-18, but avenged that loss with a semifinal victory just a week ago.
“Minnechaug’s going to be hungry,” Collier said. We have got to come out fighting. It’s my last game. I’ve got to give everything I’ve got.”
Said Parent: “Ending the season on a high note would be a great thing. There’s only one champion at the end of the year. Only one team in each division is the last team holding the trophy. Unfortunately for some, they don’t get the opportunity to end the year on a win, but for us we do.”