WESTFIELD – The 11th annual Owl Club Golf tournament was played on Monday, August 7 at the Ranch Golf Club in Southwick, Mass., and raised nearly $25,000 in support of Westfield State University’s varsity athletics programs.
A full field contested the tournament for the ninth straight year, with alumni, sponsors, friends and coaches participating too.
“Westfield Bank was our lead sponsor, as they have been for all 11 of our tournaments,” said Dave Caspole ’94, Associate Athletic Director for External Affairs. “Westfield Bank, and president and CEO Jim Hagan ’84 have been terrific partners in supporting our student-athletes.”
Whalley Computer Associates, and WCA vice-president Paul Whalley ’75 have also been key sponsors of the event, which is the largest single-day fundraiser in support of the Owls varsity athletics program.
Westfield State won the 2016-17 Smith Cup, as the best overall athletics program in the Massachusetts State Collegiate Athletic Conference, and won their seventh cup in the last 12 years. 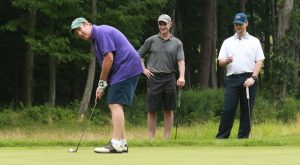 “It’s no coincidence that our teams’ great run of success on the field coincides with our fundraising efforts through the Owl Club, which help provide that ‘margin of excellence’ in funding our teams,” said Westfield State Director of Athletics Richard Lenfest, Jr. “With the great turnout of alumni and our generous sponsors, this is the most money we have raised with a single tournament, and it’s great to see so many former Westfield State athletes and their classmates get together. Many of them mark it on their calendar every year, and we are very appreciative of their continuing support.”
Despite a rainy forecast, the full field still turned out for the event, and were rewarded as the rains held off until later in the day, and light and intermittent showers did not stop play.
Westfield State president Dr. Ramon S. Torrecilha spoke before dinner and thanked the players and guests for attending and for their support.
Women’s basketball coach Andrea Bertini ’96 was recognized at the dinner as the guest of honor. Bertini’s team has won or shared four straight conference titles, and made back-to-back NCAA Tournament appearances in the last two years. She and her family have been strong supporters of the Owl Club Golf Tournament since its founding, participating each year. Bertini has also worked with Westfield State’s Inclusive Concurrent Enrollment (ICE) program, providing opportunities for several students to work with her team as student managers.
A team led by women’s lacrosse coach Jeff Pechulis won the tournament with a 14-under par score of 58. Pechulis partnered with Alan Blair, Ed Finnie and Paul Barrett. In second was the team captained by Owls women’s golf coach Jim Blascak, along with Gabe Crane, Marc Jemilo, and Jared Carey at 59, and in third was a team led by alumnus Randy Minde ’05, pairing with Gene Shaw, Marty Pelosi and Barry Felix, also with a score 59.
Mary Langan ’80, Joe Seckler ’79 and Mary Regan won closest to the pin prizes, while Jemilo and Deb Murphy won the longest drive contest, and Lenfest won the putting contest.
Players were treated to lunch before the round by sponsor College Hype Screenprinting and Embroidery, and refreshments on course were provided by sponsors Pepsi, Commercial Distributing, and Moolicious Home Made Ice Cream of Southwick. After the round, players enjoyed a steak and chicken buffet dinner. Carts were provided courtesy of Barnes and Noble Campus Bookstore. The hole-in-one and putting contest were presented by sponsor Activitas, Inc.
Additional sponsors included: The Graphic Edge, Stadium Systems, Rankin, Inc., Atty. Kevin Sullivan, Peter Davenport ’80 and The New Harvester Market, Stub Hub, the MIAA, Amaral Soccer, Bertini’s Restaurant, Wings over Westfield and the Hangar, Greenfield Country Club and PGA professional Kevin Piecuch ‘ 89, Women’s Basketball Alumnae, Ricky’s Porta Potties, Dr. Jonathan Fallon and Cooley-Dickinson Sports Medicine and Orthopedics, Bradford Builders, Pop Tops, Trustee Steven Marcus ’88, Doug Laing and Heritage Bay Enterprises, Dean Peter Mazza and John Griffin ’80, Ryan’s Liquors, 99 Restaurant, Mickey Curtis, Moe’s Southwest Grill, and the Tavern Restaurant of Westfield.
Save the date for the 12th annual Owl Club Golf Tournament – which is scheduled for Monday, August 6, 2018 at the Ranch Golf Club. – Courtesy of Westfield State University