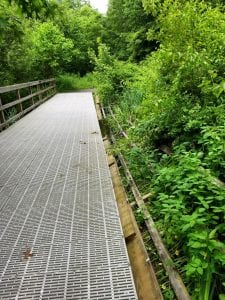 WESTFIELD – Members of the Board of Grandmothers’ Garden, as well as concerned residents and volunteers, are asking for the public’s assistance in identifying individuals who have vandalized a bridge in the park for a third time.

In June of this year vandals destroyed portions of the wetlands foot bridge in Chauncy Allen Park and Grandmothers’ Garden.  Friends President Robert Watkins and group member Richard Holcomb said the bridge was initially vandalized June 14 or 15, then again June 16.

“We believe it was a group of kids seen at the park on Friday having a fight,” said Holcomb in June. “They broke off the railing on the bridge.”

Watkins said on Father’s Day, cautions tape placed after the first incident was ripped down and the broken railing was then pushed into the water running under the bridge. Watkins said he is concerned for the safety of anyone trying to use the bridge, as well as the liability.

“I’m concerned about the liability for us and the city,” he said at the time. “Without a railing, someone could fall off the bridge.” 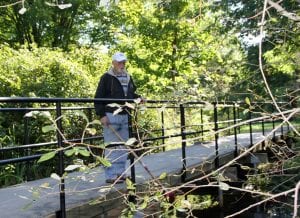 Using donated funds from The Friends of Grandmothers’ Garden this vandalism was repaired with new steel welded side railings at a cost of over $6,000.

This past weekend the vandals, who Grandmother’s Garden board members believe are neighboring teenagers, have struck again and broke one of the side rails off from the support structure.

The vandals also attempted to do the same to the other railing, which were attached by welded brackets.

Watkins and other board members do not believe the incidents were random. The believe the vandals intentionally and maliciously destroyed the property.

Any information as to the identity of these individuals can be anonymously provided to Westfield Police Officer Kevin Bard at 562-5411, or the Grandmothers’ Garden website at grandmothersgarden.org .

Grandmothers’ Garden is completely maintained through the efforts of volunteers. It is a community service venue for the Master Gardener Program of Western Massachusetts and is open to all at no cost.