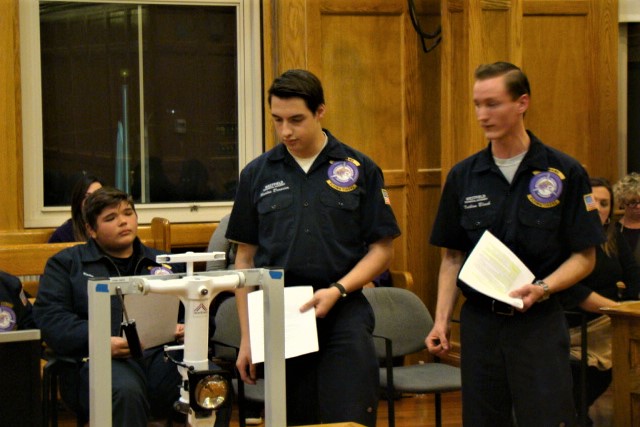 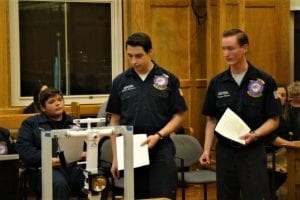 WESTFIELD – Sophomores and seniors from Aviation Maintenance at Westfield Technical Academy spoke about what they’re learning to the School Committee at the start of Monday’s meeting, quickly losing most in the audience with their technical language.
Seniors Nathan Black and Nealon Derosier demonstrated a landing gear trainer which they rolled in to City Council chambers, explaining that they’re trained on cable, hydraulic and electrical equipment that will allow them to work on any aircraft.
Sophomores said they have just taken a course on basic electricity, and how currents work to operate the hydraulics on the equipment.
AMT Instructor Stephen Dickenson said the students will graduate with Airframe and General Licenses, and will work towards their Power Plant license. “These students will graduate and be able to work on any aircraft,” Dickenson said. He said there are currently 54 students enrolled in the AMT program.
Also on Oct. 21, William Parks, CEO of the Boys & Girls Club of Greater Westfield, showed pictures of a planned expansion of the organization, which sits on land leased from the School Committee. Parks said they are looking at extending the gymnasium, which will require another hundred feet of land from the district for the $1.9 to $2 million addition. 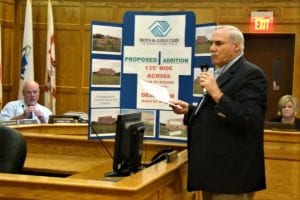 Parks said they have maxed out every available space in their building, which is currently serving 350 kids daily, a number which will increase to 400 during cold weather. Plans include expansion of their childcare (under age 9) services, and they also anticipate adding a pre-school. He said they will be applying for grant funding for the expansion.
Cindy Sullivan, who served as chair pro temp at Monday’s meeting, clarified that the organization was not asking the department for funding. “The reason you’re here is because you’re on school property. It won’t cost us, and because of the grant money, you need to know whether you have (our support),” Sullivan said, adding, “I’m going to support this, because I know it’s important.”
Chief Financial Officer Ronald R. Rix said because the lease will have to be modified, the request will have to go through the Law Department.
A motion was made to approve the concept per approval by the Law Department. The motion passed unanimously, with Bo Sullivan abstaining as an employee of the Boys & Girls Club.
Parks said the Boys & Girls Club is celebrating its 50th anniversary this year.
In other business, Rix said the district has prepared a new five-year Capital Improvement plan, as the previous one expires this year. He said the plan is part of the work they’re doing on eligibility for the elementary school with the Massachusetts School Building Authority, and it was a good time for an update.
The plan looks beyond the current project to upgrades at the high schools and athletic fields. Rix said the needs right now are in the hundreds of millions of dollars.
“This is for us. The MSBA asked for it, but we wanted to give them one for the next five years instead of one just ending,” Rix said.
The School Committee also voted to surplus property at 38 Parkside Avenue, formerly the Parkside Academy, and return it to the city. Superintendent Stefan Czaporowski said the building is just being used for storage of records, which can be moved to Angie Home Center, which is on the grounds of the Westfield Middle School, also owned by the department.
Cindy Sullivan said the Parkside Academy has been used as a school, but it is not accessible, and called it dark and dingy. “We’ve tried to utilize it as a property we own, but couldn’t afford to bring it up to code,” she said.
Rix said there are interested parties in the property.
Rix added that two other properties owned by the department, including the house at WMS and at Ashley Street do have potential uses for the district.
Recently, a motion to have the district surplus the Ashley Street property failed to move on to committee at the City Council.

“It’s prudent to save the property,” Rix said.