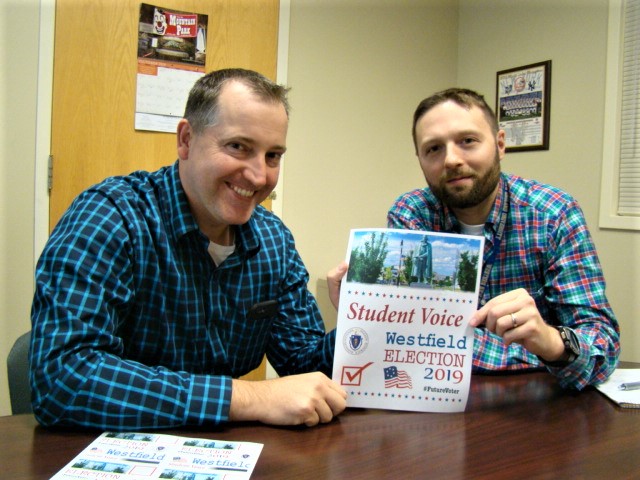 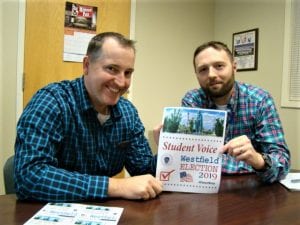 WESTFIELD – For the second year in a row, students will have the opportunity to vote in the local elections Nov. 5 at all polling locations in the city.

Tables will be clearly marked outside the doors of the rooms where registered voting occurs, and students will vote on Chromebooks. The ballots will be tabulated, and the results of the youth vote will be announced.
Westfield schools are not in session on Election Day.
Westfield Public Schools Supervisor of Social Studies Jason “Jay” Taylor said the curriculum they have prepared for the youth vote, which they’re calling “Student Voice,” will be geared toward grades 7 through 12, but voting will be open to all students. “If younger students want to vote, they can,” he said.
Taylor said this year being a local election brings a unique opportunity for teachers.
“The social studies curriculum focuses on the federal and state election process. This gives teachers the opportunity to discuss local government, which has a stronger direct impact on voters,” Taylor said. He said they are studying the model and role of the city council, and how this level of government fits into the executive and legislative branches.
Students will be voting for School Committee members as well, Taylor said.
The curriculum is being prepared by 8th grade social studies teacher Jennifer Johnson-Corwin, who is finding and creating materials and lessons that deliver information about the candidates in an impartial manner.
“The goal is to promote civic discourse,” Taylor said, in a way that is authentic and meaningful to students.
“It’s important for me that these conversations are not just happening in the classroom,” said Westfield High School Principal Charles Jendrysik.
Superintendent Stefan Czaporowski said that they are also making students aware of candidate forums, and providing video links of the 30 minute interviews of candidates by WSKB host deejays Ken Stomski and Tina Gorman on Tuesdays and Wednesdays.
“Jen Johnson-Corwin is the engine behind this,” Taylor said, adding that she also collected all of the Chromebooks, which are being programmed for the vote by Richard Anderson of the Technology Center.
Czaporowski thanked Mayor Brian P. Sullivan and City Clerk Karen M. Fanion for permission to set up voting stations for students at polling locations.
“Our hope is that parents will bring students in grades 7 to 12 with them,” Czaporowski said.
The tables will be manned by students from AP government classes and the National Honor Society at Westfield High School and from the National Technical Honor Society and SkillsUSA at Westfield Technical Academy, who are all giving up their day off to volunteer. The students will be paired with teachers at the nine voting locations, working in four-hour shifts.
Taylor said they hope to set up when the polls open. There will be a robo call going out the night before.
Students who vote will receive a sticker. Taylor said the schools are incentivizing the students to go and vote by awarding PBIS (Positive Behavior Incentive Supports) points and extra credit. Czaporowski said 36% of the student body voted last year.
“Last year it went really well. We had parents calling,” Jendryik said.
“I had parents calling me,” added Czaporowski.
“Last year, it really was a community effort. Parents bringing the kids to vote; the custodial staff, building principals, site managers at the voting locations, all working together,” Taylor said.
Taylor said Congressman Richard E. Neal visited the high school last winter, and stressed the importance of being informed and engaged at all levels. “We just want to continue that message,” he said.
Czaporowski said the district will be prepared for next year’s election for president, state senators and state representatives. “Next year will be the biggest one. We’ll learn from our experiences last year and this year,” he said. The district also hopes to develop curriculum for all grades prior to the 2020 election.
“It’s all about starting good habits. The more we start doing this and continue to offer it, they will graduate to being productive and good citizens,” Jendrysik said.