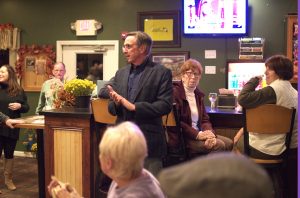 Michael McCabe addresses the crowd gathered at Tekoa Country Club after it became clear that he would become the next mayor of Westfield. (PETER CURRIER/THE WESTFIELD NEWS)

WESTFIELD — Michael McCabe walked out of a back room of Tekoa Country Club shortly after 8 p.m. Tuesday to chants, cheers, and applause as it became clear that he will become Westfield’s next mayor.

McCabe, a retired police captain, won the rematch against incumbent Mayor Donald Humason Jr. with 4,714 votes to Humason’s 3,846. McCabe lost the previous campaign between the two in 2019 by fewer than 100 votes.

In a speech after he learned of his victory, McCabe credited his campaign team, which he said had matured and become more effective in their work on the campaign since the 2019 election. The core team for his campaign was largely the same as it was in 2019.

“It was a nice precursor to 2021,” said McCabe, “The difference in 2021 is that all of you were much more of an integral piece. We knew what we were doing. We were pretty comfortable.” 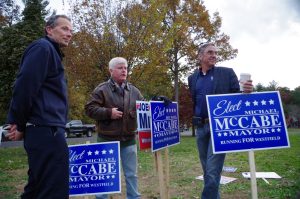 McCabe thanked Humason and his campaign team for running a clean, respectful campaign for mayor.

“It was a super, super amicable race,” said McCabe.

He noted the difficulties in running a traditional campaign during the COVID-19 pandemic. He said that he instead chose to go out and walk through the streets of Westfield to meet with potential voters one-on-one.

McCabe said that his first priority will be to get to know each city department better and how they work together on a day-to-day basis. He hopes to work with Humason closely in the transition over the next two months.

One of his priorities, which he said he likely won’t be able to get to right away, will be dealing with the near-daily traffic backups on and near the exits for the Massachusetts Turnpike.

Of more immediate concern to him, however, is the city’s response to the pandemic, and getting vaccination numbers up and getting infection rates down. During the mayoral debate last month, McCabe made a point that he thought Humason’s strategy for combating COVID-19 could have been managed better.

“I would like for us to be a healthier community,” said McCabe. 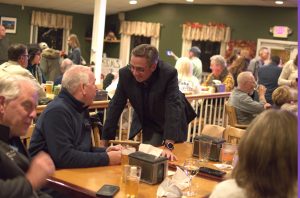 He said he is looking forward to “getting to know the city again from the inside out.”

After the result was confirmed, Humason called McCabe to concede, a conversation that McCabe described as “congenial.”

The atmosphere at the Tekoa Country Club following McCabe’s victory was jovial. When McCabe entered the room after the result was all but confirmed, he was greeted with chants of “Mike! Mike! Mike!” and enthusiastic applause from his supporters who were gathered there.

McCabe retired from his position as captain of the Westfield Police Department in 2020. He had been with the WPD since the 1980s, and also teaches criminal justice courses at Westfield State University, which he said that he intends to continue if his schedule as mayor allows it.