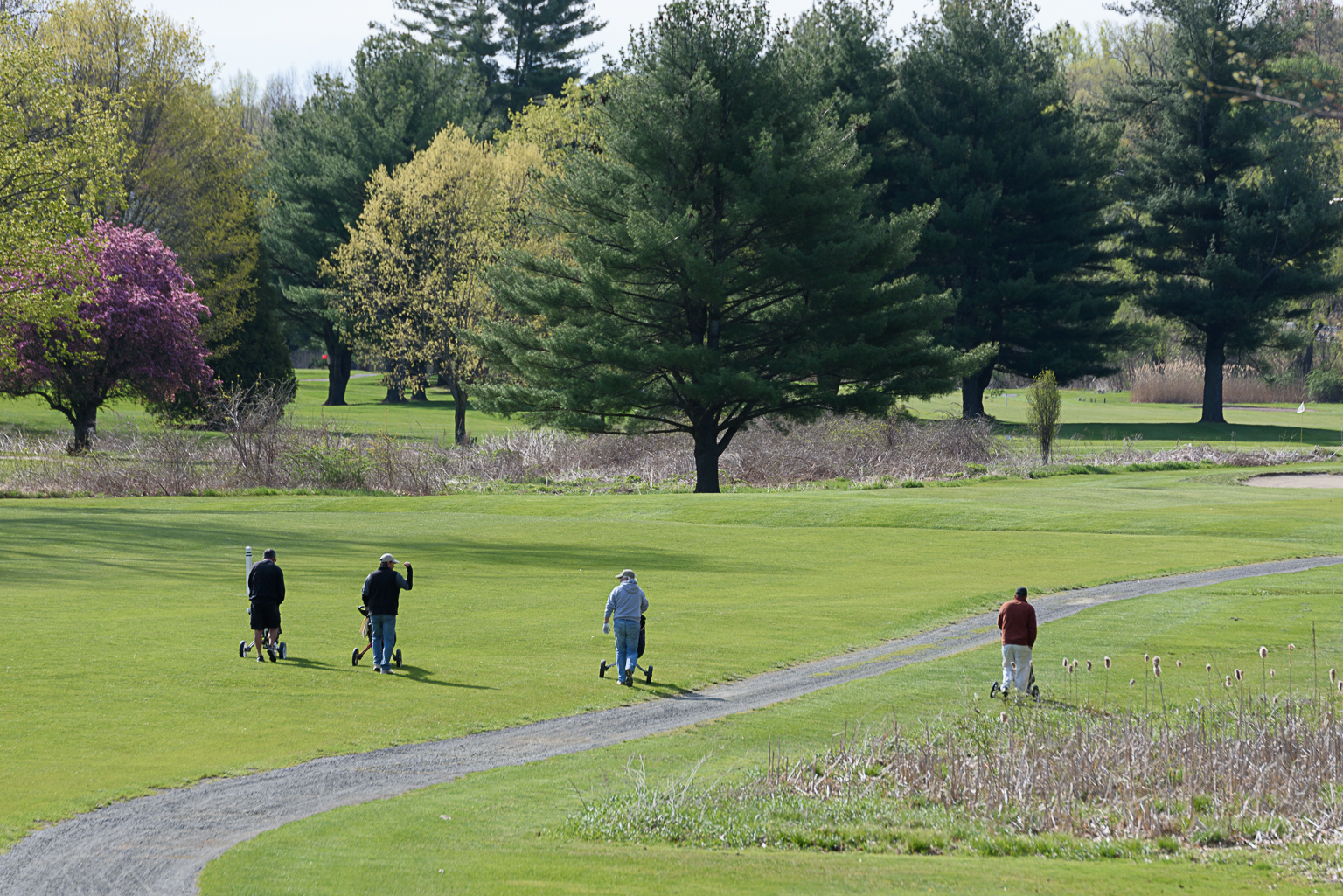 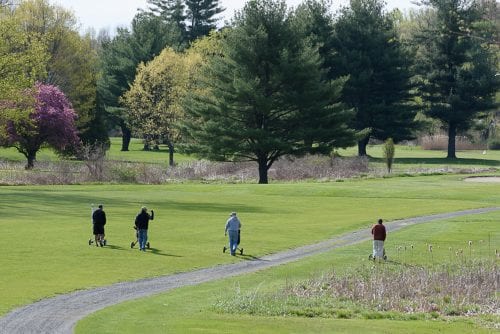 Golfers head out for a round of golf Friday at Tekoa Country Club in May 2020. (MARC ST. ONGE/THE WESTFIELD NEWS)

WESTFIELD — The Conservation Commission approved a plan last week by Tekoa Country Club to save its golf course’s fourth green from erosion and collapse into the Westfield River.

Ryan Nelson, an environmental scientist with R. Levesque Associates, representing Tekoa, said over the years, the river has been eroding the cart path and collapsing it. He said rainfall since December 2020 has pushed the erosion all the way through the cart path and begun to eat away at the green.

“Our intent and our goal is to restore the bank, and make it more stable, so the golf course can remain in existence,” Nelson said.

The plan has been continued for a year on the commission’s agenda, due to a back-and-forth with the Massachusetts Department of Environmental Protection, which asked that the project restrict all work to the top of the bank; and MassWildlife’s Natural Heritage and Endangered Species program, which wants safeguards to protect an endangered mussel in the river.

Nelson said the country club is now proposing to start at the existing top of the bank and relocate the current cart path away from the river. Once the slope has been regraded, the club plans to stake the slope with Filtrexx Compost Socks to stabilize it with native plantings. Over time, as the plants become established, the roots will stabilize the soil underneath, Nelson said, adding that the previous practice of mowing the grass right up to the bank may have been part of the problem.

Nelson said under the revised plan, which was sent to the DEP and is posted under Conservation Filings at www.cityofwestfield.org, there will be no impacts to the bank, and no impacts to underwater. He said the plan only impacts 300 square feet of the riverfront area.

A determination letter received from Natural Heritage also required that all work must be done at the top of the bank, in order for there to be no increased impacts to the resource area. Nelson said while field conditions have changed, they must follow the same design and submit any design changes. He said an updated survey is in the newest plan.

Under the proposed conditions, the cart path will be relocated approximately 17 feet farther from the river. In their response to the DEP, Nelson wrote that it would not be possible to relocate the cart path completely outside of the 200-foot riverfront area, due to the configuration of the golf course parallel to the Westfield River, with a large majority of the golf course falling within the riverfront area.

“The cart path in the area of the erosion problem will be relocated as far away from the river as feasible while preserving the existing putting green, which is essential to the operation and livelihood of the Tekoa Country Club golf course,” Nelson wrote in the response, adding that the proposed project will improve conditions and provide for a more stable riverbank.

During the discussion at the meeting, Commissioner James Murphy asked if the plan would include work below the water. He said that the bend in the river is exposed to a lot of scouring, including ice, and asked how that would be addressed.

Nelson said all of the work will start from the top of the bank.

“This was part of the back-and-forth with Natural Heritage. The endangered species are mussels. They didn’t want us in the river, and we couldn’t restore the bank to its former footprint.”

He said not mowing to the edge of the cliff will leave a 20-foot natural area on top.

Commissioner Clifford Laraway said the river is eight feet down and comes right up to the edge of the bank, and asked how not mowing would help.

Nelson said mowing was partly responsible for the erosion, because there were no trees with roots, and also that the DEP told them the work they had planned on the edge of the river wasn’t consistent with performance standards.

“This is a more permissible method,” he said.

“One of the problems here is that this particular area didn’t have any trees. In areas that have trees, you don’t see the same erosion,” said Chair David A. Doe. He said a problems with boulders, which were suggested by some commissioners, is that water can get behind them and scour out anyway. “This may be the best way,” he said.

“Given the rare species, this is the best way,” said Conservation coordinator Meredith Borenstein.

Thomas Sharp asked what would prevent this from happening again in five years, for which Nelson had no answer.

“Rivers do this all over,” he said.

Doe asked what was the evidence that the compost socks could withstand the velocity of the river. Nelson said they were designed for river banks. Borenstein said while she hadn’t seen that product before, the plantings and seed will stabilize the exposed soil.

“Based on those specifications, it makes sense to think that’s a good product,” she said.

Asked when Tekoa planned to start the work, Nelson said they were hoping to do it this fall, but he guessed it would now be done in the spring.

“Our job is trying to stop a problem that is happening at an unsustainable rate,” he said.