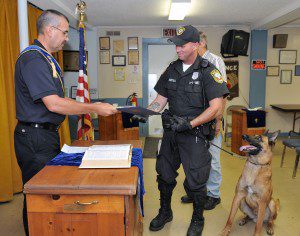 SOUTHWICK – Each year the Southwick Grange #46 recognizes an outstanding citizen of the year as the recipient of their “Community Citizen of the Year” award.
However, this year’s award took on a special twist when members of the Grange recognized a dog and his handler.
The prestigious plaque was presented in front of local dignitaries and spectators in the main room of the Southwick Grange hall on College Highway by Butch LaBombard, Grange’s chaplain.
Labombard praised Jax, The Southwick Police Department’s eight-year-old police dog, and his handler, Southwick K-9 Officer Thomas Krutka.
Jax, a Belgian Malinois dog, was bred in Holland and brought to the United States when he was one and half years old.
Jax was trained as a multi-purpose dog so his skills include locating illegal narcotics and other evidence and the tracking of humans, both suspects and missing persons.
Jax is Krutka’s partner on the four to midnight shift and his pet when they’re off duty.
Selectmen Arthur Pinell and Russell Fox were on hand to congratulate the team and presented a certificate of appreciation from the town recognizing their dedication and determination to serve the residents of Southwick and the surrounding communities.
Pinell told the crowd that the pair is a valuable resource to the town and its residents. Pinell said that the Selectmen were grateful to the Grange for recognizing the K-9 team and for sponsoring the event.
After the official celebration, Krutka staged a short hands-on demonstration of the multi-talented dog 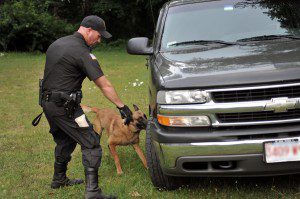 Unlocking the rear door of the specially designed police cruiser, he revealed a not-so-normal police unit.
As Jax took his position in the rear seat area of the vehicle, Krutka explained how the K-9 cruiser was specially equipped with a variety of climate control devices, remote-controlled rear doors and special alarms to keep his partner safe.
“Jax listens and watches the situation when I’m out of the vehicle,” said Krutka.
The eight-year K-9 officer said that when he rolls into a bad situation and people see the cruiser shaking and hear a 70-pound dog shrieking to be released, it can be intimidating.
After several K-9 demonstrations, Pinell said, “One thing I did learn tonight was when you hear the dog bark, freeze.”
Krutka said he and his partner have participated in numerous missing person searches that could turn into life-or-death situations when time is of the essence.
“When someone’s life is in danger, we will be there” Krutka added.”
“No matter what, call us if someone is missing” he said.
Southwick Police Chief Mark J. Krynicki, who was in attendance, called Krutka and his K-9 friend, “a great partnership” and said “We don’t live in an area with a high crime rate, but we do live on a main route that could be used to run illegal drugs so it’s nice having a dog like Jax on the job.”
Krynicki also pointed out that K-9 teams are vital to the school system because the students never know when dogs could be used for surprise locker inspections.
“While no tax dollars were used to purchase the dog, we still rely on partial donations to keep the program going”, said Krynicki.
“It costs a lot to maintain this invaluable service” he added. Donations can be dropped off at the station anytime, he said
Krutka thanked the Grange members, the Southwick Police Department and all the residents involved in the program for making the awards ceremony one of the most memorable moments of his eight-year career.