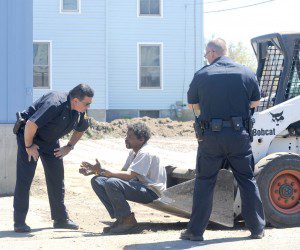 WESTFIELD – In the wake of a recent complaint about transient pavers soliciting in the city, Westfield police were quick to respond Monday when a Russellville Road resident reported that an offer had been made to pave his driveway.
On Tuesday, a paving crew drew the attention of an officer who found that a trailer carrying the crew’s equipment had expired registration and a worker was the subject of an outstanding warrant.
Officer Charles Kielbasa was dispatched to speak with the caller Monday but found that the paving company solicitor had left the area. He soon found the company’s crew at a Southampton Road address.
There, Kielbasa reports, all was in order.
He found that the pavers, ABC Paving Company of Charlestown, N.H., were working at the direct request of the resident who had contacted them on the advice of a friend for whom they had worked.
They had business insurance, a contract and the resident was happy with their work.
The problem, Police Capt Michael McCabe explains, is that they had not secured a license from the police chief to solicit work and therefore any solicitation of additional work violated city ordinance.
McCabe said that the license is important because it allows for an opportunity to ensure that transient workers in the city are vetted so that persons who may have outstanding warrants or are unsavory in any other way are not given an opportunity bring their troubles to the city.
He said that by not enforcing the licensing requirement, gypsy workers who are not accountable for their actions are given an opportunity to ply their trade.
Another risk is that persons who appear to have a legitimate reason to be at the door and find that nobody is home may take the opportunity to break into the residence to steal whatever can be found.
If somebody is at home, the resident may be inveigled into allowing the solicitor to use a bathroom or enter for some other reason and, while the resident is distracted, a confederate may enter the residence to steal.
If no larceny is involved, the resident may be taken in by a scam which usually begins with a contractor who has “extra” asphalt and will offer a cut-rate deal on a driveway job to avoid wasting the asphalt.
McCabe explained that, once a resident has made a verbal agreement, he may find that the contractor exceeds the agreed scope of the job and later presents a bill for much more than what the resident thought he was going to pay.
He said that, often, a resident may feel as if he is partially at fault for not clearly defining the job or may be embarrassed that he was taken in.
In either case, McCabe said, the scam often goes unreported.
By dealing only with licensed contractors, a homeowner has options for redress which are not available if the contractor is located far away and may be difficult to find, once he has been paid, McCabe said. 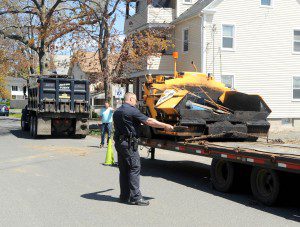 On Tuesday, Kielbasa observed a paving crew working on a Meadow Street parking lot and a routine check revealed that the registration of the company’s trailer had expired.
Further investigation revealed that a worker, Courtney J. Yopp, 48, of 207 Osborne Road, Ware, was the subject of a warrant issued by the Chicopee court and he was taken into custody.
The paving company, Stanley and Sons Paving according to the sign on the truck, was represented by Richard Stanley.
An Internet search revealed a listing for the company at 62 Munn Road in Monson.
Kielbasa had responded last week to a complaint about a company doing business as W. Richards with a New Hampshire phone number which was represented by Joshua Stanley.
A Barbara Street resident complained that, although the paving crew looked to be legitimate, the work they did was far below his expectations and he refused to pay them.
A Rogers Avenue resident reported that a member of the crew had come to her home to solicit work saying that they had asphalt left over and, although she paid them, was not satisfied with the job they did.
That crew was ultimately escorted to the turnpike and advised to stay away from the city.
Although the employees of both W. Richards and Stanley and Sons have the same name, McCabe said whether or not they or their companies are related is “irrelevant” as is the question of how Stanley and Sons secured the work on Meadow Street.
It is not known if Stanley and Sons violated the ordinance by soliciting for the job or if the job was secured in a legal manner, he said.
He points out that if the company had applied for a license to work in the city and had supplied names for the employees working here, the warrant would have come to light and the wanted man would not have been working in the city.
He said that what matters is that the trailer operating on a public way was unregistered and the worker had a warrant and those were the issues police dealt with.