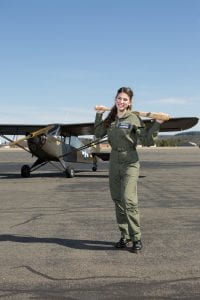 WESTFIELD – Stella Starfire may be a fictional character, but what she stands for is very real – women’s empowerment and being a role model for girls.

Stella was introduced in 2020 as a representative of the Starfires Futures Collegiate baseball team based at Bullens Field. Stella goes out into the community and serves as the MC on the field during games and meets and greets fans.

Starfires owners Chris Thompson and Donnie Moorhouse created the concept of Stella and said she has been a wonderful way to show their team’s young female fans that a woman can do anything. Stella Starfire is a pilot, who knows a thing or two about baseball.

“My daughter is five and loves Stella,” said Thompson. “We have a softball program and Stella is such a cool figure for them to see.”

The Starfires also works with local Girl Scouts and has plans for cheer and dance teams to attend games this summer.

Accompanying Stella in 2021 will be Stanley – the Starfires’ new mascot, a black squirrel named for Stanley Park, where the city’s iconic black squirrels originated.

“I’m not sure what the school year will be like, but we hope Stella and Stanley can go into schools and Stella can read to students,” said Thompson.

Stanley will officially be introduced as the season opener – slated for the end of May – approaches. Thompson said he is excited for Stella and Stanley to bring the Starfires’ message to the community.

The Starfires are currently seeking host families for players. For more information, call 413-335-0443.