CHICOPEE-The longtime vision of Ruth Willemain’s “Harmony House” is now closing in on becoming a reality.

Despite years of setbacks and the COVID-19 pandemic, countless volunteers and board members who have worked tirelessly to see Harmony House of Western Massachusetts come to fruition now expect the doors to be open by early fall.

Prior to the pandemic, persons working behind the scenes conducted “blitz builds” with many volunteers converging on the home at 66 View St. to accomplish as much as possible during a day’s work. 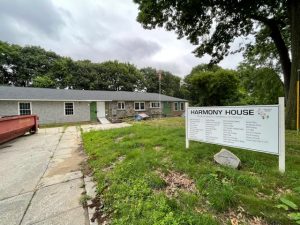 While the blitz builds were successful in the early phases of the restoration of the home, once the pandemic hit volunteers had to find alternative ways to get work done.

“We have had and continue to have so many people who have stepped up in some form or another to contribute to the building of this dream for a home for people to come to in their final days,” said Denis Martel, who has served as volunteer on-site coordinator for many years.

Martel noted that one family has gone “above and beyond.”

“The Huerta family from Chicopee, a family of five, have been there every step of the way and have gone so far above and beyond and there just aren’t enough words of thanks that we could begin to give to them,” said Martel.

With the rough electrical and plumbing now done, Harmony House volunteers have been waiting for the arrival of paint to move the project forward.

“We want to acknowledge Universal Electric in West Springfield, and owner Jim Kennedy, as well as BPD Plumbing and the Plumbers and Pipe Fitters Union #104,” said Martel. “We also want to thank Scott Thomas of Whalley Computer for the WiFi.” 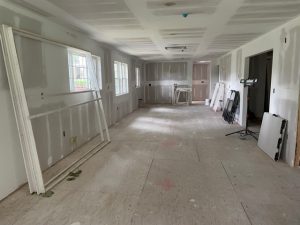 This is the future kitchen space at Harmony House in Chicopee. (LORI SZEPELAK PHOTO)

Now that 200 gallons of paint and supplies have been delivered, volunteers are once again gearing up for assignments.

“We also want to acknowledge Tim Carey, district sales representative for the Chicopee/Springfield district with Sherwin-Williams in Chicopee,” said Martel. “The color of the interior is slate violet and colonnade gray.”

Ger Ronan has facilitated the final phases of the home that will provide compassionate care for terminally ill individuals throughout the region within a comfortable, loving, home-like environment. 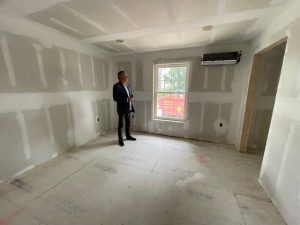 Ger Ronan, who has served as a building facilitator for Harmony House, reviews a mini split in one of the future bedrooms. (LORI SZEPELAK PHOTO)

“It has been phenomenal to see a local charity and local people come together to see Ruth Willemain’s vision come to life,” said Ronan.

Willemain’s vision is to offer a social model home for those who are facing the end of their lives alone, without adequate caregiver support.

In the early days of fundraising for Harmony House, Willemain was selling chocolates at local crafts fairs including the St. Mary’s High School Christmas fair in Westfield. After those humble beginnings, members of the church community including women of Our Lady of the Blessed Sacrament Church in Westfield took hundreds of boxes of chocolates from Willemain to sell.

“I give my greatest heartfelt gratitude to everyone for their time and energy to Harmony House,” said Willemain.

During a tour on July 8 of the 6,000-square-foot home, Ronan pointed out the five bedrooms for hospice patients, as well as the other rooms including a chapel and living room with fireplace.

“The centerpiece of Harmony House will be the chapel with stained glass windows, donated by Father Dan Pacholec of Our Lady of the Blessed Sacrament Church in Westfield, in memory of his mother,” said Amy L. Corcoran, who serves as president of Harmony House’s board of directors.

“I became involved with Harmony House shortly after my father’s passing,” said Corcoran. “Being one of five children, each of us living in separate states, it was difficult to decide what would be the best plan of care. With little means and a mother determined to keep him at home, we tried the best we could.”

Corcoran noted the toll on her mother was significant and eventually her father passed at the hospital. 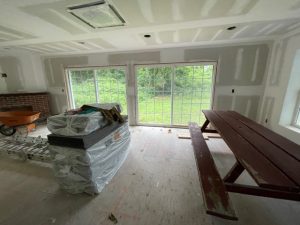 “I knew there had to be a better way,” said Corcoran. “A way where someone could pass in a home-like setting, surrounded by support and love, and not worry about the financial burden. In 2015, I was introduced to Ruth Willemain, and my journey with Harmony House began.”

Projects left to complete include landscaping and adding plants, and Martel is hopeful that a local business will be able to assist with this need. Additional projects on the to-do list include fencing, driveway paving, work on decks and a hatchway, as well as the front porch and trench to connect to the sewer line.

“We are also thankful for donations from Mass Mutual which include desks, end tables, nightstands, lamps, art work for the walls and much more,” said Martel.

Martel added that mini splits are in the entire house with baseboard electric heat for back-up.

“A large portion of the items were sold to us for 50% off wholesale and Fujitzu really stepped up,” said Martel, adding, “and the labor for installation was donated by Diamond Comfort Heating and Cooling.”

For area residents who would like to make monetary donations to ensure the viability of Harmony House, send checks to Harmony House, P.O. Box 706, Chicopee, MA 01021.

“I got involved at the start of Harmony House’s inception and spent many hours fundraising for this great cause and because I saw there is a great need for this type of care,” said Martel. “Being part of such a meaningful endeavor makes me happy to know so many more people will be helped through those trying months in the last part of their loved one’s life.”