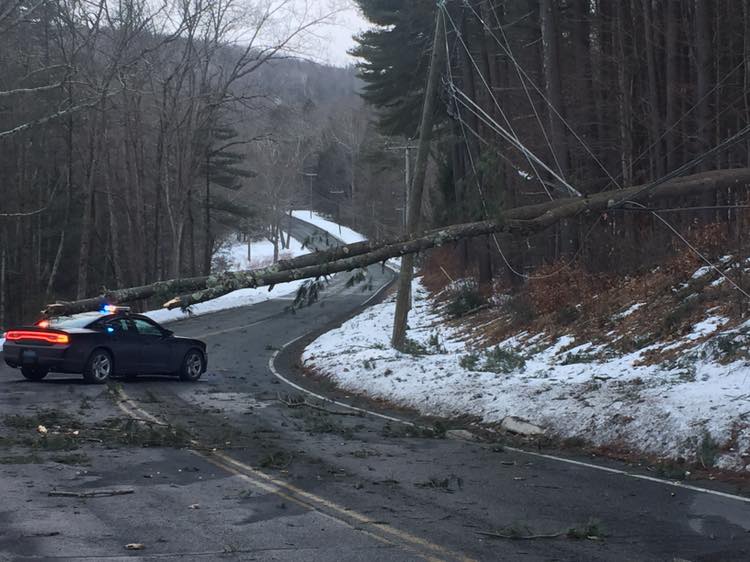 According to Southwick Emergency Management Director Charlie Dunlap, there were about 95 residents without power in Southwick at one point yesterday. Areas without power included Mort Vining Road and Charles Johnson Road. Power has now been restored to those areas. 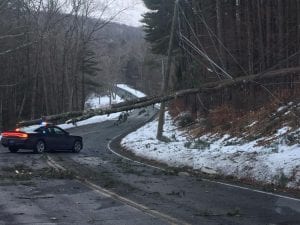 A tree is seen down on a road in Granville on Monday as a result of the high winds. (Photo courtesy of the Granville Police Department)

Working and staying in communication with the National Weather Services in Norton, Mass., Dunlap recorded the highest gust of wind in Southwick at 63 mph (miles per hour).

“That’s the highest wind gust that I’ve ever seen here in Southwick,” said Dunlap, who’s been a part of Southwick Emergency Management since 1992.

Multiple trees and wires came down throughout the day on Monday. At 11:13 a.m., trees were reportedly down across the area of 67 Klaus Anderson Road, blocking the roadway. At 11:50 a.m., a tree came down near 149 Mort Vining Road and hit a wire that caused a fire. The Southwick Fire Department arrived on scene and put out the fire while Eversource came to tackle the wire. Mort Vining was closed from 12:30 p.m. until 3:30 p.m.

Less than two hours later, at about 1:35 p.m., a tree hit a vehicle on Powder Mill Road that caused over $1,000 in damage to the vehicle. Fortunately, the vehicle was able to drive away from the scene. Just around that same time, a tree branch fell in a driveway on North Longyard Road and hit a car, causing some damage to the car.

Hours later at 5:38 p.m., a large pine tree came down on an apartment building at Lakewood Village, causing damage to one  apartment. Southwick Chief of Police Kevin Bishop said that the building couldn’t be occupied again until the tree was removed. No one was reported to have been injured from the incident.

As of Tuesday morning, Chief Bishop was not aware of anyone without power.

Southwick’s neighbor, Granville, also faced the consequences from the high winds. Four roads in Granville were closed at one point in time on Monday from trees and wires being down. Those roads were, Old Westfield Road, Silver Street, Beech Hill Road, and Barnard Road. Granville Police Lt. Rick Rindels said that all four of those roads are now back open.

Rindels added that about 12 trees came down across roads yesterday and the last power outage repaired was a little after midnight early Tuesday morning. No fires were reported by Granville Police as a result of the winds.