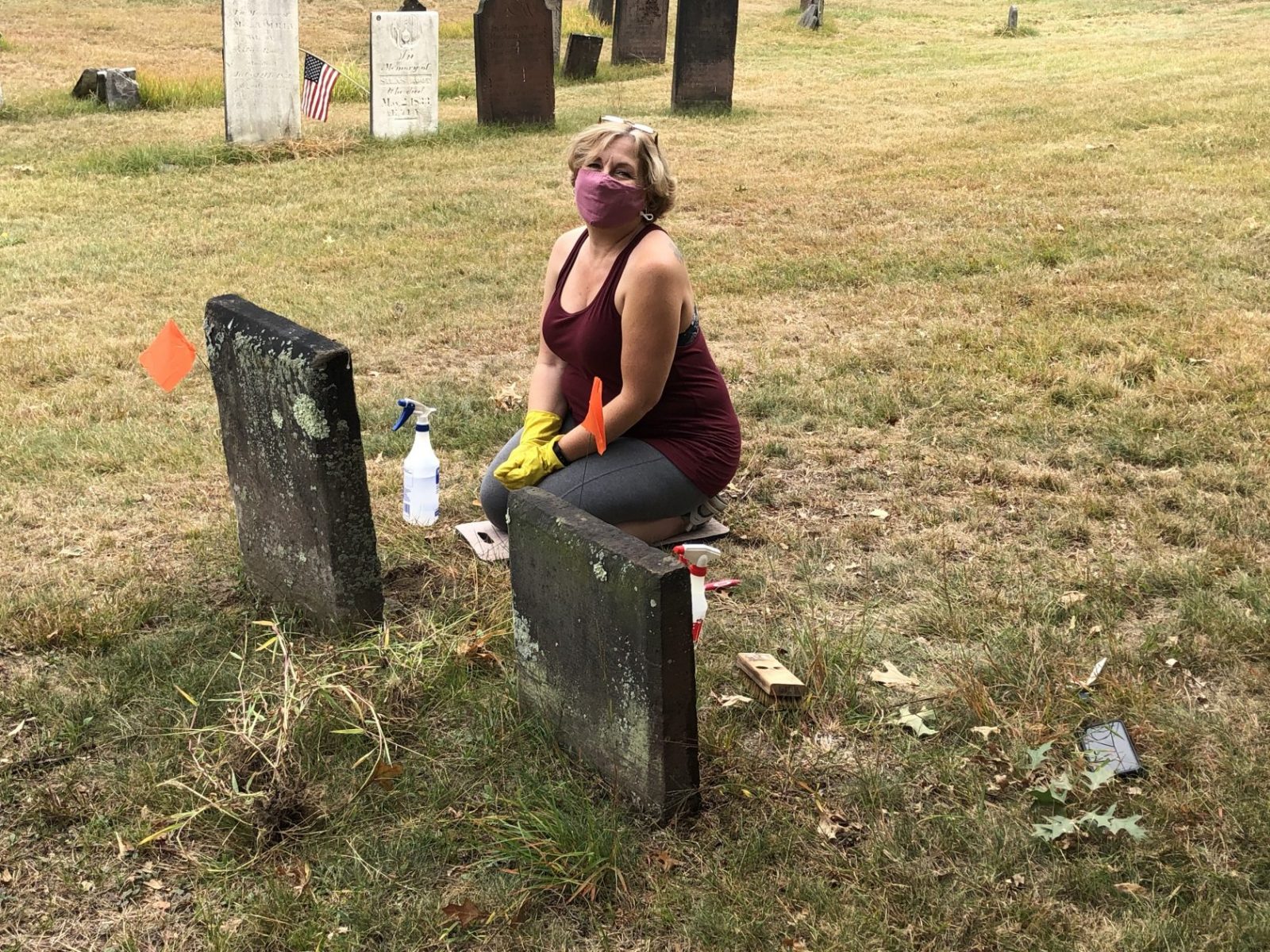 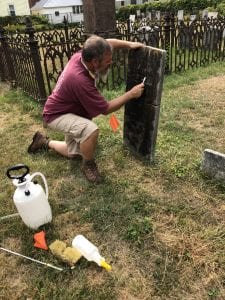 Historical Commission member Michael Ingraham cleans a headstone with D/2, which can remove grime, moss, and other blemishes from older headstones to make them look newer. (CINDY GAYLORD PHOTO)

WESTFIELD- COVID-19 has impacted the way most of the City of Westfield’s boards and commissions operate both inside and outside the confines of City Hall.

Zoom meetings and hot mics have become a staple of 2020 as local governments work around the pandemic to continue the day-to-day operation of their communities.

The Historical Commission is charged with preserving and restoring historical artifacts in the city, including buildings, documents and the local burying grounds.

“We are also charged with promoting the history of our city as well, which we feel is our greatest task,” said Cindy Gaylord, the Historical Commission chair.

On Sept. 27, eight members of the commission went to the Old Burying Ground on Mechanic Street to take part in a masked and socially distant headstone cleaning. They found that the four-acre burying ground was perfectly conducive to have eight people cleaning the stones while maintaining social distancing. They cleaned the headstones with a substance called D/2, which cleans stains and other blemishes off of older headstones without damaging the stone itself.

In a normal year, the Old Burying Ground would likely have been host to the annual Ghost Tours, an event in which Westfield residents dress up as historical figures from the city’s past and talk about their history while standing next to the grave of said historical figure. Gaylord said that the plan is to have the Ghost Tours return next year, but that the format could be changed from years past, which was the plan this year before it was cancelled. 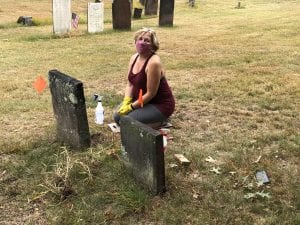 The Old Burying Ground is currently in phase 3 of the Historical Commission’s restoration plan. Irving Slavid of  Monument Conservation Collaborative LLC has been working on repairing the tabletop stones and standing monuments found throughout the cemetery. Gaylord said this is being done mainly to make the Old Burying Ground safer for people to walk through.

TaMara Conde of Historic Gravestone Services has recently been working on repairing the wrought iron fencing that surrounds some of the family plots in the OBG. Conde had begun this process last October, but COVID-19 caused the foundry she used to be shut down, so she was unable to work with the metal for some time.

The funds used to work on these projects does not come from the city, but directly from ticket sales from the Ghost Tours. Gaylord said she is hoping to move on to phase 4 of the Old Burying Ground restoration, they would need to hold more ghost tours next year to be able to fund it further.

COVID-19 kept most people at home for many months out of this year, and Gaylord thinks that some people took the extra downtime they had to learn more about their family history and their roots in Westfield.

“We have had a great increase in emails and phone calls from people who have been researching their family’s past, trying to find out where their ancestors are buried in Westfield,” said Gaylord, “We have had people come from as far as Buffalo to the Old Burying Ground and find their relatives.”

She said that she spoke to one person who found out that they were the direct descendant of the famous Rev. Edward Taylor.

Taylor was a poet and the first minister of the First Congregational Church in Westfield. Gaylord said that, as it would happen, the descendent of Taylor who contacted her is a writer and poet as well.