The Conservation Commission is seen speaking with the owners of AAA Homes (left) on Monday night. (Photo by Greg Fitzpatrick)

SOUTHWICK – The owners of two proposed single-family homes at 61 and 63 College Highway met Monday with the Conservation Commission to discuss the status of their enforcement order.

The Conservation Commission issued a cease and desist in January. AAA Homes of Agawam, the applicants for the proposed project, made a violation with their application. With one driveway planned for each of the homes, AAA Homes had a third driveway constructed in the middle of the two other driveways to allow their concrete trucks to travel up to the construction site.

According to Southwick town officials who have been reviewing the application and overseeing the project, the silt from the driveways has runoff into the road. The driveway and the two homes are located on a steep slope.

Southwick Police had to work a traffic detail to make it safer for vehicles to pass by and help avoid any accidents from occurring because of the runoff. It was also estimated by town officials that 50 cubic yards of erosion material has gone into the nearby wetlands.

The Conservation Commission had also issued an enforcement order to AAA Homes, which made it mandatory for the applicants to create and submit an Erosion and Sediment Control plan in order to prevent any more material from going onto the road or the wetlands.

On Feb. 5, the Conservation Commission approved the request from AAA Homes to extend the deadline to complete the plan. 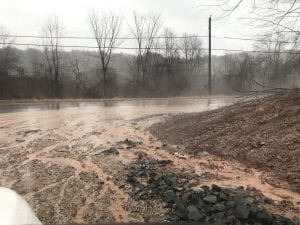 The runoff of the silt from the driveway on 61 and 63 College Hwy is shown going onto the road this past January. (WNG File Photo)

AAA Homes and Levesque are scheduled to meet with with the Planning Board  Tuesday to request approval for the erosion and sediment plan. Levesque suggested Monday that the enforcement order stops once the Planning Board approves the plan. The Conservation Commission agreed with Levesque’s recommendation.

While discussing the rest of the details of the project, Conservation Commission Coordinator Dennis Clark said it would make more sense for the homes to just have one combined driveway with a median in it because he believes the construction of two driveways could become a safety hazard.

Levesque suggested that because of the recent heavy rain, AAA Homes be allowed to spread topsoil and seed since it’s the perfect time to do it.