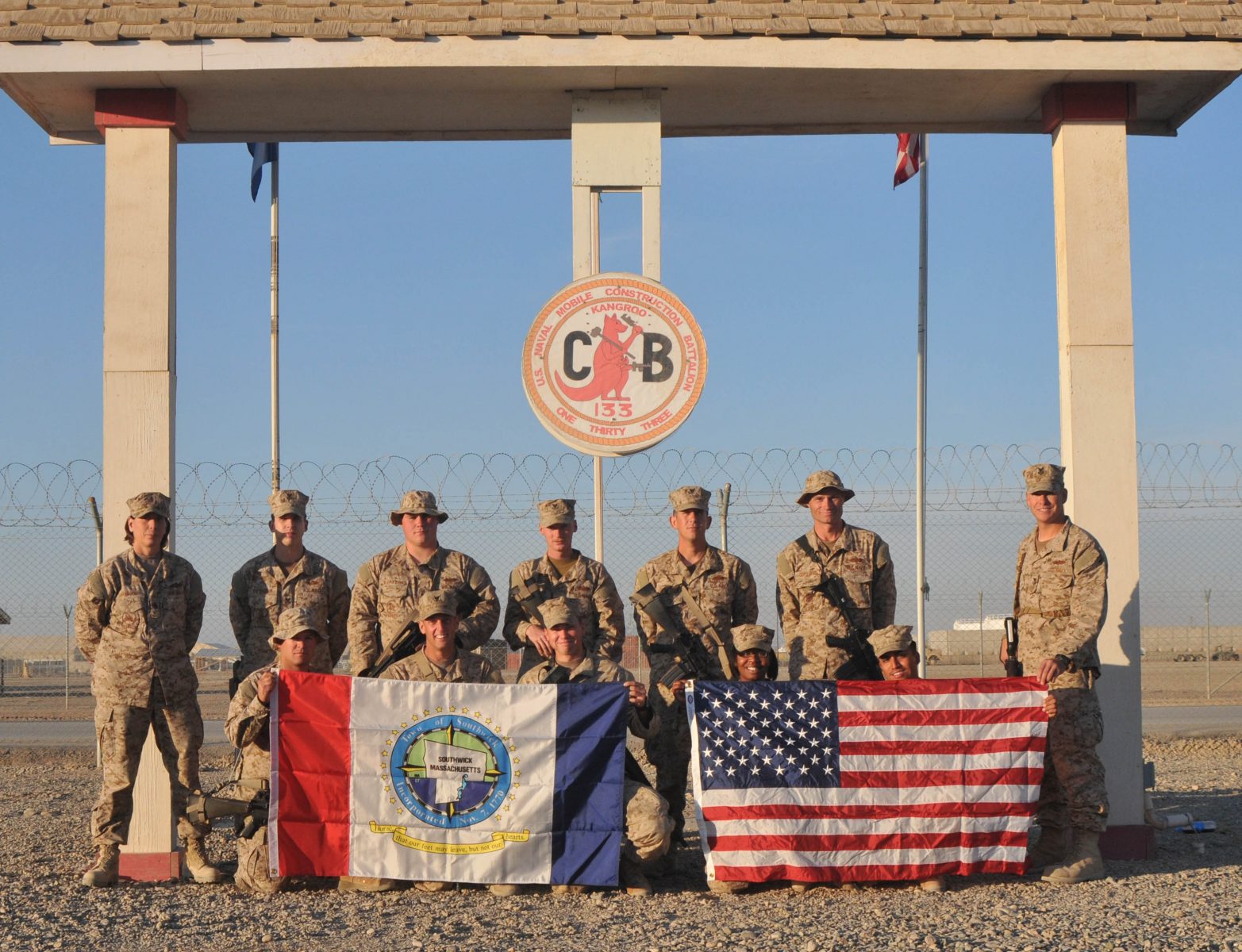 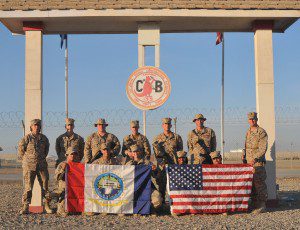 Justin Dillon of Southwick with his water well drilling crew and a Southwick flag that he brought with him to Afghanistan. (Photo submitted)

SOUTHWICK – Resident Gary Dillon worries daily about his son.
This is not an unusual occurrence for a parent with young children.  However, Dillon’s son is a 31-year-old man with a family of his own. He is also currently deployed to Afghanistan with the Navy See Bees.
“I worry about him every day,” said Dillon. “It’s dangerous there.”
Justin oversees his See Bee crew drilling wells in the dessert, which is not an easy task.
“They’ve had to drill down 1,000 feet,” he said. “If you drill far enough, eventually you find water. He and his crew are working at small outposts in the desert that do not have water. They are living in tents with no amenities to speak of and sleep in arctic sleeping bags with their M4 rifles by their side. The desert temperature now can go down to 15 degrees at night and then to 70 degrees in the day. It’s not exactly a good time.”
The drilling isn’t dangerous.  However, getting to the remote locations can be an ordeal.
“The Taliban will send little kids out in the road to get their attention, but they are not allowed to get out of their trucks,” Dillon said. “If they get out, they may get shot at.”
Dillon said the vehicles carrying the drill and other equipment are armored for protection so the main danger occurs if they leave the vehicle.
Dillon said Justin’s wife and six year-old son are at their home in Mississippi and missing Justin, especially as the holidays approach. Justin is also missing his family.
“I do get to talk to him about twice a week and email him when he’s at the base, but when he’s out drilling there’s just a satellite phone and reception is terrible,” said Dillon. “It’s lonely.”
To make the holiday season a little less lonesome, Dillon’s family and friends have sent care packages to Justin and the troops stationed with him, as well as cards to his family in Mississippi. A member of Citizens Restoring Congamond, Dillon reached out to that community to send letters and cards to Justin and his wife.
“The real unsung heroes are the wives and kids and family of our troops. I have been asked for my daughter-in-law Audrey and grandson Evan’s address for cards and letters of support. I’m sure they would like to hear that their sacrifice of missing Justin on the holidays is not going unappreciated by the rest of us,” Dillon wrote in an email to the CRC.
Receiving a letter from home means so much to those deployed right now, Dillon said.
“They love it,” he said. “And I think a card or letter would be nice to let them know people care about what they’re doing for us,”
Dillon said he is fortunate to have friends and family who want to support Justin, and Justin has passed that on to his fellow troops by sharing his care packages.
“He posts all his cards and letter so everyone can read them,” Dillon said. “He gets a lot of support, but some people don’t get any.”
Dillon said Justin is happy to receive letters from home to share with his crew, as well as the Marines and Army troops stationed there. To send a card or letter, address it to Dillon, Justin, Nmcb 133 main body WW, Fpo as 34099-5041.