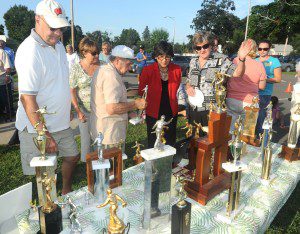 After a ceremony Monday evening to dedicate the horseshoe pits at municipal playground to the memory of Bill Babinski Sr., former horseshoe league president Carl Haas, Charlie Babinski, a brother of the honoree, City Councilor Agma Sweeney and Mary Ann Babinski, a daughter of the honoree, look over some of his trophies. Family members said that they couldn’t bring all of Bill Babinski’s trophies to the park but they brought about 40 of them. (Photo by Carl E. Hartdegen)

WESTFIELD – Members of the city’s horseshoe league gathered as usual for their regular Monday evening of pitching but some came a little early and were joined by members of the Parks and Recreation Commission and other city officials for a ceremony to dedicate the horseshoe pits in honor of one of the founders of the league, and perhaps its most successful horseshoe pitcher, the late Bill Babinski Sr.
A delegation from the league had approached the commission at their September, 2011, meeting to request that the horseshoe pits be named after Babinski, a pillar of the club, who died in August, 2011, at the age of 93.
The league participants and family members told the commissioners that Babinski had been instrumental in forming the club in the late 1950s and had served as its president for many years.
The current president of the club, Lee Small, said that although Babinski stepped down as president years ago he continued to run the club. He jokingly called himself and his predecessor, Carl Hass, “figureheads” who deferred to Babinski, who continued to come to the club and kept score at matches even after his doctor ordered him to stop pitching horseshoes in 1998.
The commission took action promptly to authorize the change at the park and members of the league went to work preparing the plaque and stone for the park, which was renamed the William J. Babinski Memorial Horseshoe Park last night.
At yesterday’s ceremony, City Councilor Mary O’Connor served as mistress of ceremonies, welcoming a crowd comprised of members of Babinski’s family, friends, horseshoe league members.
Family members brought some of Babinski’s trophies to the ceremony but said that there were too many to bring them all. About 40 plaques, cups and trophies were on display as O’Connor cited some of Babinski’s accomplishments.
Babinski won regional horseshoe championships several times and was the Massachusetts champion in 1960. In addition, Babinski was inducted into the Horseshoe Pitchers Association Hall of Fame in 1988.
One of Babinski’s sons, Bill Babinski Jr., spoke at the ceremony and said his father “was always the driving force of the league”. He said that the horseshoe area at the park would not be what it was today without his father, who paid strict attention when the park was renovated, in 2007, and pointed out deficiencies for correction.
Westfield Mayor Daniel M. Knapik also spoke and said “No greater contribution was ever made to this city” than the work Babinski did to establish and maintain the horseshoe league.