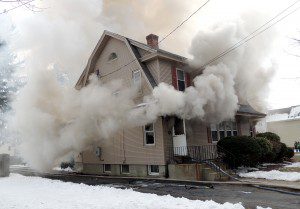 WESTFIELD – A High Street family had a rude surprise Sunday morning when they returned home after church and found smoke billowing from their home and firefighters swarming their property.
City police report that multiple callers reported a fire at 21 High St. starting at 10:31 Sunday morning.
Dep. Fire Chief Andrew Hart was the first emergency responder to arrive and engines 4, 5, 3, the aerial platform truck and an ambulance arrived moments later with officers Seth Florek and Kerry Paton on their heels.
Hart reports that he found heavy fire burning in an addition at the rear of the single family home and Paton reports that a neighbor and a passerby had kicked in the front door before he arrived to check for occupants.
Firefighters attacked the fire from the front of the house and Hart summoned additional firefighters.
An engine was dispatched from the West Springfield department and Holyoke firefighters sent their ladder truck. Before the fire was extinguished, the Westfield reserve engine, engine 6, was also sent to the fire
State Trooper Michael Mazza, an investigator assigned to the state fire marshal’s office, also responded and reports that the fire originated in the kitchen.
“We believe that the fire started at the clothes dryer” Mazza said but said that any further investigation will be conducted at the behest of the insurance carrier for the house.
Hart reports that the firefighters were able to contain the fire in the rear addition to the house but other portions of the building were affected by significant smoke and heat damage.
One firefighter was treated at Noble Hospital for a burn but returned to duty.
Paton reports that, although the residents escaped injury, a cat and a hamster are believed to have perished in the fire.