SOUTHWICK – Connor Geddis delivered the ball to Nick Doyle, who sprinted to it, blowing past a defender, and took it some nearly 30 yards before ringing up Southwick’s first goal in the opening minutes of the 2017 high school boys soccer season. 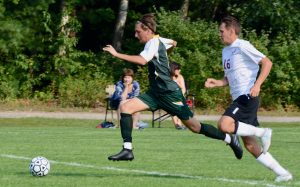 Geddis doled out two more assists, Doyle went on to finish with one goal and one assist, and Kyle Demaio (3 saves) pitched a shutout in net as Southwick rolled to a 3-0 shutout of Easthampton in Tuesday’s season opener at Nonotuck Park.
Nick Brown, Evan Clarke, and Tim McGrath finished with one goal apiece for Southwick (1-0).

GIRLS’ SOCCER
Van Heynigen nets hat trick in Gators’ shutout
Gateway 3, Athol 0
Jessica Van Heynigen recorded a hat trick, and the Gators earned a road shutout on opening day.
Heynigen used her outside right foot to knock home a goal on a penalty kick in the first half. In the second half, she headed in a Jules Dickinson’s corner kick, and used her left foot on a long shot for her third straight goal.
“Jess said ‘I’ve never done that before,’” Gateway coach Steve Estelle said. “Left foot, right foot, and headed it in.”
Becca Herman finished with three saves.

GOLF
Rams start where they left off
Southwick 15, South Hadley 9
Bradley Durand shot a team-low 36, James Longhi finished with a 38, and Southwick extended its league winning streak to 30 with a victory at Edgewood Country Club Tuesday..

JV GIRLS’ VOLLEYBALL
Renaissance 2, Southwick 1
While most points were made through service aces, ninth grader Alexa Rogers, eighth grader Megan Hoxha, and seventh graders Gillian Bourque and Georgiana Andrade served up some solid serves.
“Ninety percent of the girls on the JV team this year are new to the sport and have never played in an organized game before,” Southwick JV coach Courtney Rivest said. “The girls all seemed to come into their own throughout the three sets. Overall, I’m very proud of the girls and cannot wait to see the progress they make throughout the season.”