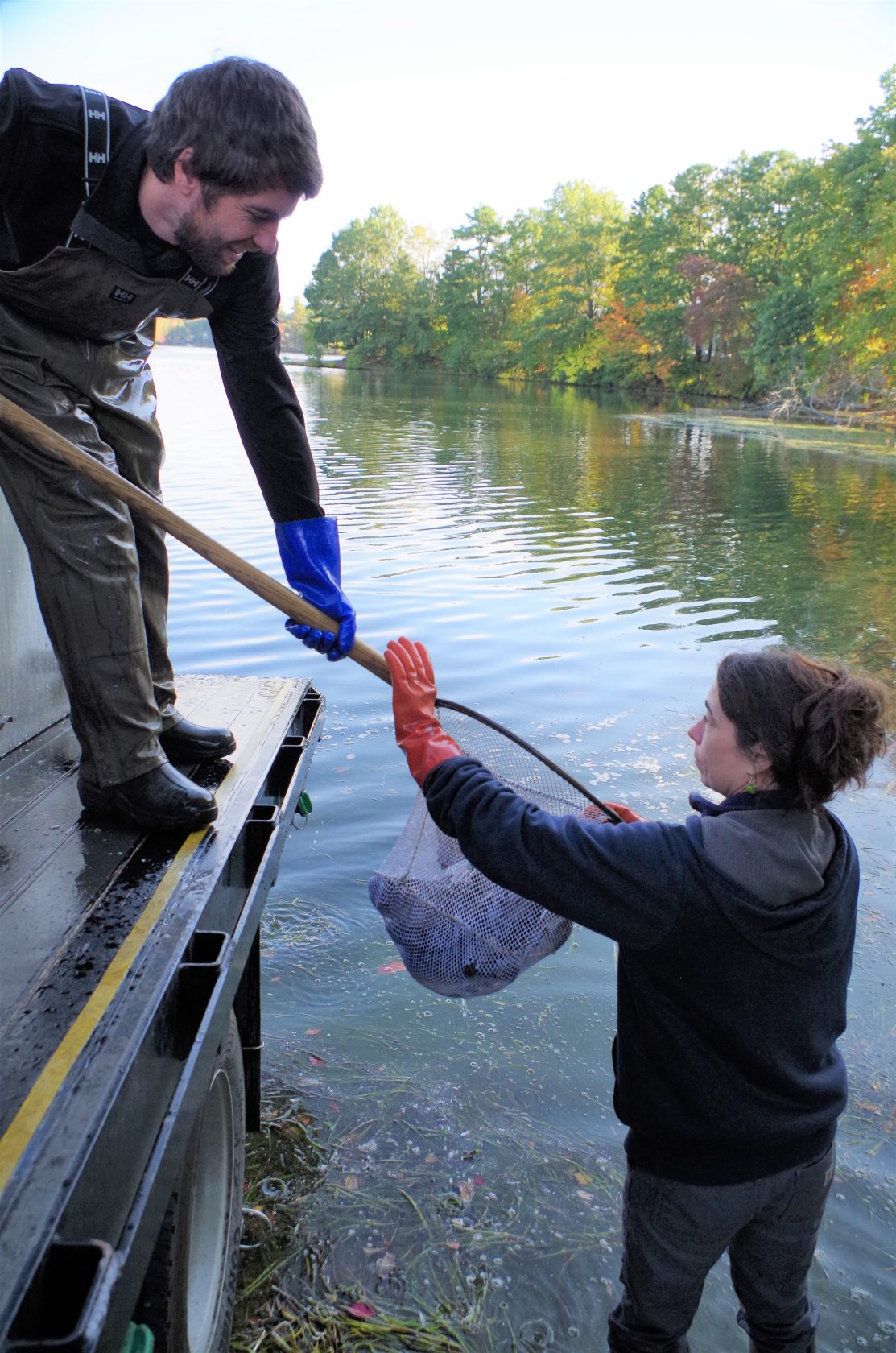 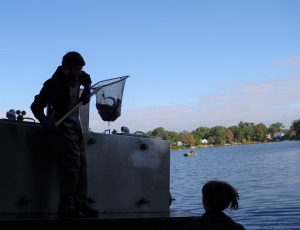 Christopher Connors of MassWildlife lifts a net full of trout out of the back of his truck while stocking fish at Hampton Ponds State Park on Oct. 8. (MICHAEL BALLWAY/THE WESTFIELD NEWS)

Several hundred trout from the McLaughlin Hatchery in Belchertown were stocked last week in Hampton Ponds, thanks to the efforts of the Massachusetts Division of Fisheries & Wildlife.

On the morning of Oct. 8, Shasta Slade and Christopher Connors with the Connecticut Valley District of MassWildlife released trout at two locations on Hampton Ponds, each trout approximately 1.5 to 2 pounds.

“Our main approach in Massachusetts is put and take,” said Brian Keleher, biologist with the Connecticut Valley District, based in Belchertown. “We put the fish out at a size we consider quite large and ready for an angler to catch.” 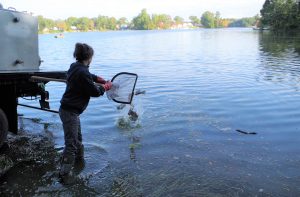 Shasta Slade of MassWildlife tosses trout from her net into the water at Hampton Ponds State Park on Oct. 8. (MICHAEL BALLWAY/THE WESTFIELD NEWS)

To make the process less traumatic for the trout, workers often carefully release five to 10 fish by hand at a time using a net.

Keleher said these trout are quite a catch.

“If someone catches one, they are excited,” he said.

These fish, coupled with nearly 500,000 trout that were stocked in the spring, promise to provide great fall fishing, according to MassWildlife. Anglers are reminded to buy a freshwater fishing license before enjoying a day on the water. 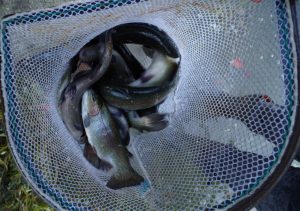 Trout writhe in a net on their way to being stocked at Hampton Ponds State Park on Oct. 8. (MICHAEL BALLWAY/THE WESTFIELD NEWS)

Once Slade and Connors had completed their restocking effort at Hampton Ponds, their next destination was Middle Pond in Southwick.

While some anglers enjoy the thrill of the catch and then release the fish, others are eager to bring home their day’s catch as a meal.

“It is a balance,” said Keleher, adding, “Some people like to catch fish for dinner and others prefer to catch and release. The fish are there to be utilized and enjoyed by how one wishes.”

Keleher noted that the trout also have predators by land, air and sea. In Western Massachusetts, river otters, eagles, osprey and blue herons are the most common threats to the trout population. 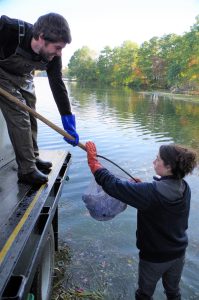 In addition to the Hampton Ponds and Middle Pond sites, several areas of the Westfield River have been restocked this fall, as well as Littleville Lake on the Chester-Huntington line.

In the spring, Keleher said, restocking in waterbodies is done once in late March, again in late April, and lastly in May.

“MassWildlife targets cold-water species including rainbow, brook, brown and tiger trout,” said Keleher, noting when the restocking occurs in the spring and fall, the water temperature is ideal in the mid- to high 60s.

“The trout are cold-blooded, so they do a lot better in cold weather,” he said.

For more information on lakes, ponds, rivers, and streams that have been stocked, click the pins on a map at mass.gov/trout to find stocking dates and species stocked. Additionally, trout tips and tricks to catch more of them can be found on its links.

The Division of Fisheries and Wildlife has been operating fish hatcheries since the agency was formed in 1866, making it the oldest state-operated hatchery program in the country, according to its website. MassWildlife manages five hatcheries in Belchertown, Montague, Sunderland, Sandwich and Palmer, producing brook, brown, rainbow and tiger trout.