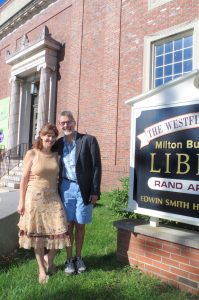 Richard and Sonia Vella stand outside the Westfield Athenaeum, where they were married Sept. 18. (MICHAEL BALLWAY/THE WESTFIELD NEWS)

WESTFIELD — Folks leaving the Westfield Athenaeum last Saturday might have gone home with a long-awaited DVD, or a free pass to a favorite museum, or the hottest bestseller on the fiction rack.

Richard Vella and the former Sonia Ellis — known to friends as “Sunny” — were married Sept. 18 in the Jasper Rand Art Museum room, surrounded by works of local artist Insun Russell and by a downtown Westfield institution that had already played a large role in their lives.

“We wanted someplace that was special and unique to us,” Sunny said this week. “It just made a perfect backdrop for the ceremony.”

The dozen or so friends and family members attending the wedding helped set up a canopy, decorations and seats from Jerome’s Party Plus while library business continued in the rest of the building. The whole process went smoothly, Richard said, though the scheduling was a challenge: Everything had to be done during the Athenaeum’s open hours.

Richard and Sonia Vella leave the Westfield Athenaeum as a newly married couple on Sept. 18. (SUBMITTED PHOTO BY AARON RIOBE)

Attendees also helped take down the decorations after the ceremony, while the married couple had photographs taken at the fountain on Park Square. Their wedding reception was across the street at the Tavern Restaurant.

Becky Blackburn, the library’s outreach coordinator, said this is the first wedding at the Athenaeum that she knows of.

“He had a line in his profile that said, ‘Take a chance, reach out,” Sunny recalls.

They went on one date, though each one also went on a date with someone else before they realized that they wanted to stay together for keeps. They later bought a house together in Southwick, and began planning their wedding.

Sunny said the original plan was to be married in 2020, but the COVID-19 pandemic intervened. She has a sister who lives in England, and had to wait for travel restrictions to loosen so that her sister could be here for the wedding.

Richard and Sonia Vella decorated the Jasper Rand Art Museum room at the Westfield Athenaeum for their wedding on Sept. 18. (SUBMITTED PHOTO BY AARON RIOBE)

When it came time to choose a venue, Richard and Sunny decided they wanted a place that had significance for both of them. Both are avid readers, and both had good memories of time spent at the Athenaeum.

For Richard, the Athenaeum was almost a second home during his teens and 20s in Westfield. He recalled spending hours at a time browsing books and periodicals, passing the time learning something new.

“If I had nothing to do, I would come to the library,” he said. “That was my go-to place. It was my comfort.”

Sunny grew up in southern New Jersey, but moved to Montgomery several years ago with her then-husband and their two sons. She and the boys were “constant” patrons of both Montgomery’s small library and the Westfield Athenaeum, she said. After moving to Westfield, she spent even more time at the Athenaeum.

Richard said his wife will often read 10-11 books per month. Her favorite genre is mysteries, in particular a series of books by Alan Bradley about Flavia de Luce, a young girl in the 1950s who finds herself at the center of murders and has to solve them.

She also enjoys reading nonfiction books about science, including the workings of the brain. Her work history combines a love of writing and engineering. Until recently, Sunny was working on a National Science Foundation grant at Springfield Technical Community College, getting middle school students interested in engineering through stories.

Richard prefers to read about current events and politics, both in current affairs books and in the several newspapers and magazines he subscribes to. He said a typical breakfast table at his house would find him reading the newspaper and Sunny deep in a mystery.

Richard also has children from a previous marriage, a son, 36, who lives in Westfield, and a daughter, 25. The couple are spending their honeymoon at a cabin in Vermont, and will make their home in Southwick.