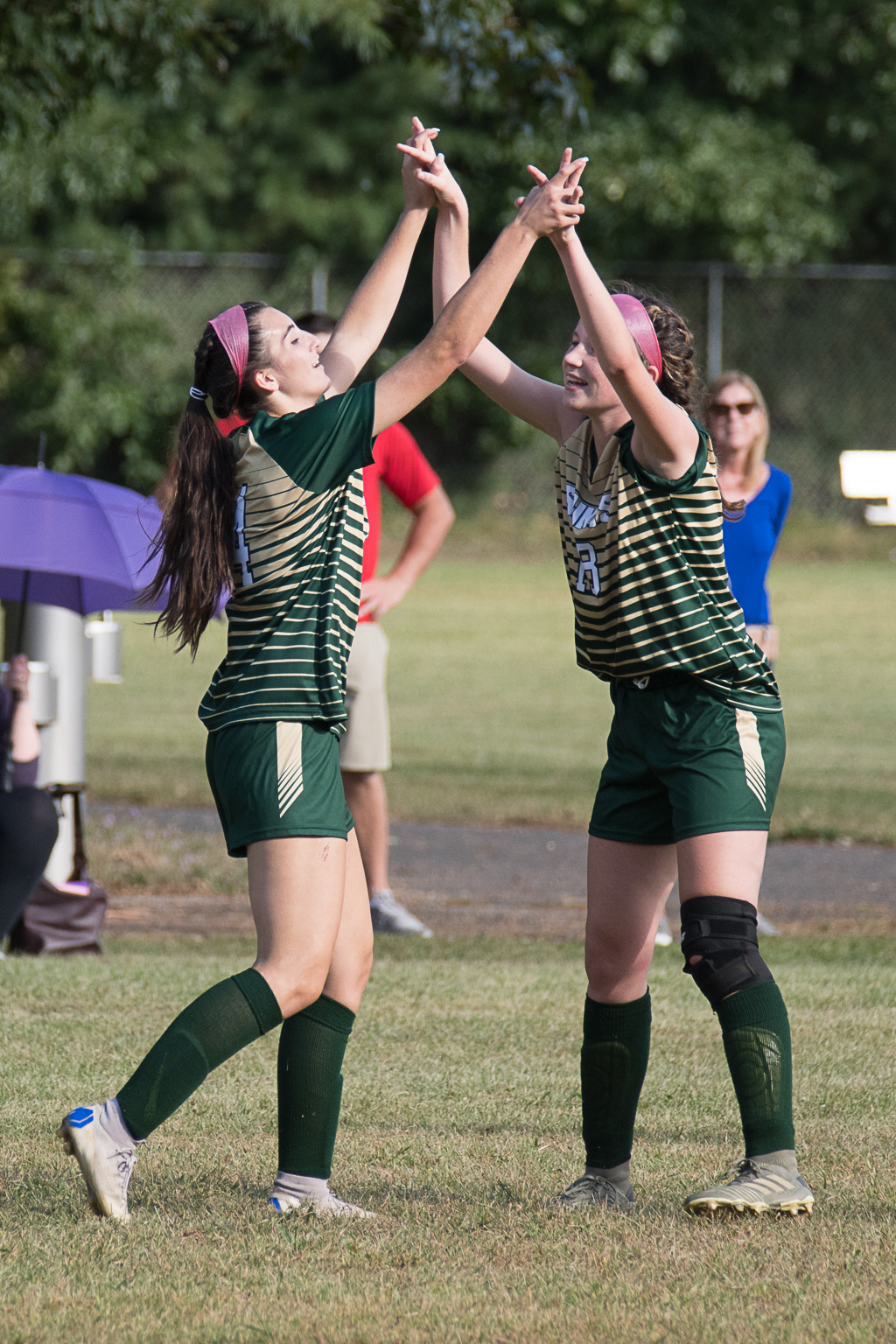 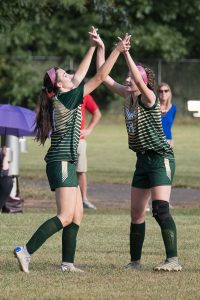 WESTFIELD – There is one sister act in town that is bringing some heavenly play to the Whip City.
Two years ago, then St. Mary’s sophomore Allie Goodreau scored her 100th point. On Tuesday, current Saints sophomore Emma Goodreau scored her 92nd and 93rd points with two goals in a 2-0 win over Smith Academy at Westfield Intermediate School.
“It’s so exciting because I’m close to my 100th and I can do it with my sister here – – she’s a senior – – so I’m excited about that and just for the win for our team,” a bubbly Emma Goodreau said after the game.
The first goal from Emma Goodreau came in the 8th minute on a shot from outside the box. The ball right went underneath the goalie.
“I was like – – you know what – – I’m in space and I’m just going to kick it,” Emma Goodreau said.
Emma went one-on-one with the goalie in the 17th minute for her second goal and won again. “I kind of just slipped it in,” she said. “It went right over (the goalie) and it went in.”
With a 3-game road trip now looming for St. Mary’s (4-1), the road to 100 figures to be a challenge. Still, it is one that Emma welcomes.
“I think if the way we are working now and how we can play, I think I can get it in the next few games,” she explained.
Although she is has her eyes on 100, Emma truly understands the team concept.
“I try not to focus on (100) much because I try setting up other players,” she admitted. “When I have the chance to score I do but it’s more like me setting up the other players and that’s the way of getting my goal. …It makes me feel like a leader out there because it’s not just the goals for me … and having (Allie) as a sister helps me out a lot.”
It also helps when you have a netminder like St. Mary’s junior goalie Amelia Willenborg, who has now posted 10 straight shutouts following a 14-save performance against Smith Academy. Willenborg suffered a pregame injury during a game earlier this season and sat out the entire game but the team breathed a sigh of relief that the absence was short-lived.
And there are others.
St. Mary’s sophomore fullback/midfielder Macy Woodger made Willenborg’s job relatively easy by keeping the ball out of their own zone most of the afternoon. Saints’ freshman midfielder Emmie Collins continuously put pressure on Smith’s defense by motoring around the field on nearly every play. Sophomore winger/halfback Anna Puttick earlier this season made the switch to the midfield where she now sets up fellow teammates like the Goodreau sisters.
“Now she’s in all the plays,” St. Mary’s girls soccer coach Patrick Olearcek said of Puttick.
St. Mary’s next opportunity to help Emma achieve her milestone will come at Franklin Tech Thursday at 4 p.m.

GOLF
Tigers bounce back in big way
Westfield Technical Academy 21.5, Central 2.5
Westfield Tech bounced back from a 17-point loss at Pathfinder on Monday with a convincing victory Tuesday at East Mountain Country Club. Three Tigers shot under 50, led by Deven Werbiskis with a 46. Evan Grant shot a 48 and Andrew Reed finished with a 49.
Westfield Tech improved to 5-2.

Rams win on tiebreaker
Southwick 215, Longmeadow 216
Southwick won a thriller at Twin Hills Country Club, overcoming a one-under on the par 35 from Longmeadow’s top golfer Ryan Downes and defeating the Lancers by tiebreaker. The Rams had two golfers shoot a 39 – – Matthew Garrity and Andrew Morris.
Southwick’s Jesse Johnson and Josh Drumm finished with a 42 and 46, respectively. With the scores tied after four golfers, the decisive fifth score belonged to Matt Coviello (49) who nipped Longmeadow’s Myles Chapman (50) by one stroke.

BOYS SOCCER
Pacers nip Rams
Chicopee 1, Southwick 0
Chicopee escaped with a narrow victory at Szot Park. The Rams will attempt to bounce back Thursday at home against Holyoke.