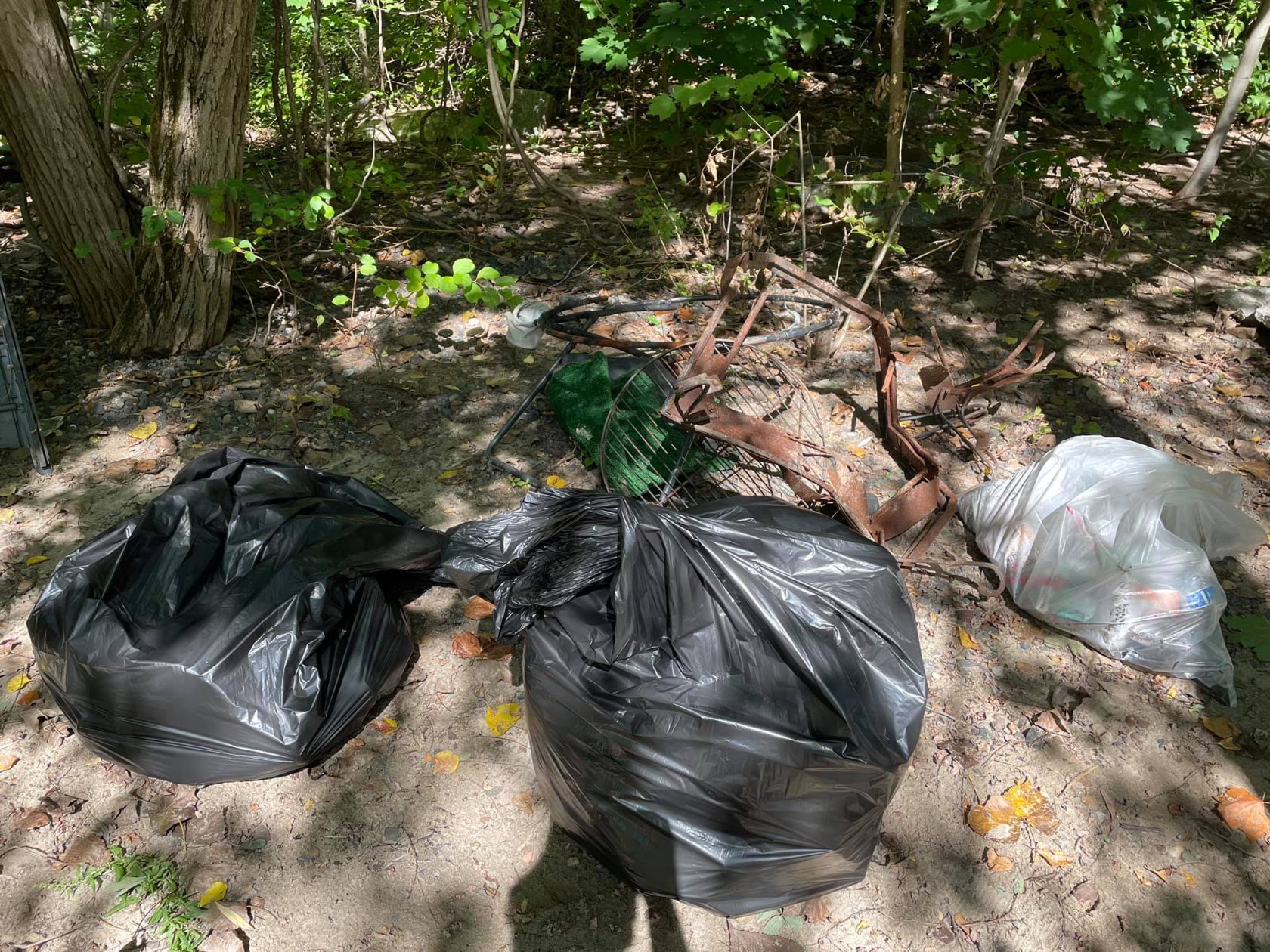 The WRWA pulled about 20 bags’ worth of trash from different parts of the Westfield River in Westfield Sept. 25. Along with smaller pieces of trash, improperly discarded scrap metal was also discovered. (PHOTO SUBMITTED BY WRWA)

WESTFIELD — The crime of illegal dumping may not be the most serious crime police must deal with, but Police Chief Lawrence P. Valliere said that it is something the police actively try to prevent, but the problem does not seem to go away.

“That is one of my pet peeves,” said Valliere.

The city of Westfield frequently receives calls about people improperly disposing of objects like mattresses, tires, furniture, and other larger objects that are more difficult, and expensive, to dispose of than normal trash. Often these objects can be considered environmental hazards, and essentially amount to large scale littering.

Valliere said that enforcement is difficult, though there are some areas of Westfield that are popular places for people to illegally dispose of bulk items where police often monitor. Catching the perpetrator, however, is often a matter of luck.

“We will sometimes see a vehicle loaded with stuff. Sometimes the person has a history and we will follow them,” said Valliere, “It’s not very popular with [the police]. We have cited a number of people for it over the years”

Oftentimes, removing the illegally dumped items falls to the Department of Public Works, which costs money to taxpayers. Items like that are typically brought to the Twiss Street transfer station. Interim DPW Director Fran Cain said that this has been a problem in Westfield for a long time, and he is unsure of what the solution should be.

“It has always been a problem with people throwing stuff away improperly,” said Cain, “Somebody who does that will do that stuff no matter what.”

Some bulk items, he said, are also more difficult and expensive than others to deal with.

“Mattresses are the worst. They are disgusting and they cost a lot of money to get rid of,” said Cain.

When an illegal dumping incident is reported, the DPW always makes an effort to clean it up. The locations with the most offenses are typically dimly lit parking lots and dead-end streets, according to Cain. Sometimes, however, someone will dispose of bulk items on abandoned private property, in which case it falls under the Westfield Health Department’s discretion. Such an incident was reported this week when a pile of vehicle tires was discovered behind a vacant former auto body shop in Westfield.

Valliere said that there was previously a problem with college students illegally dumping items from their college housing, especially in the area of Franklin Avenue and Summer Street at the beginning and end of the Westfield State University semester. He said that problem was mostly solved when the police got the local landlords together to have them help with enforcement.

The overall problem, however, remains. Valliere said that the main driver of the issue is that it costs a person money, sometimes a lot of money, to legally dispose of things like tires and mattresses, and often they need to be taken to a place like Valley Recycling in Easthampton.

“There is no place to bring most of this stuff in the city without paying for it,” said Valliere.

Though the city and DPW generally try to take care of bulk items that are illegally left in public areas, it can be more difficult to enforce and clean when it happens in areas like the woods or shoreline along the Westfield River. The Westfield River Watershed Association typically has two annual river cleanups in the spring and fall to fill that gap.

Mark Damon, first vice president of the WRWA, said that the most recent Westfield River cleanup on Sept. 25 cleaned about 20 bags’ worth of trash from the river and its edge. Damon said that it was mostly smaller pieces of trash, with few larger pieces of trash to be found. In the past, he said it would be more common to see bulk items like tires, mattresses, kitchen appliances and construction debris.

Ann Barone, WRWA’s second vice president, said small items like nips, the single-shot bottles of alcohol, are becoming more and more common during these cleanups. She said a lot of plastic products that are marketed as recyclable are not as recyclable as they claim. The problem with nips in particular, compared to other types of beverage containers, is that there is no bottle return option to incentivize people not to litter.

“If nips could be returned, that might help to clean it up,” said Barone, “We see very little soda bottles anymore.”

She said that the WRWA is advocating for a law to be passed that would allow for nips to be accepted, called “Jack’s Bill” in honor of late Agawam resident Jack Coughlin, who was well known in the community for picking up nip bottles and cleaning up roadways. Coughlin was tragically struck by a vehicle in Agawam in January of this year, and died from his injuries in the spring.