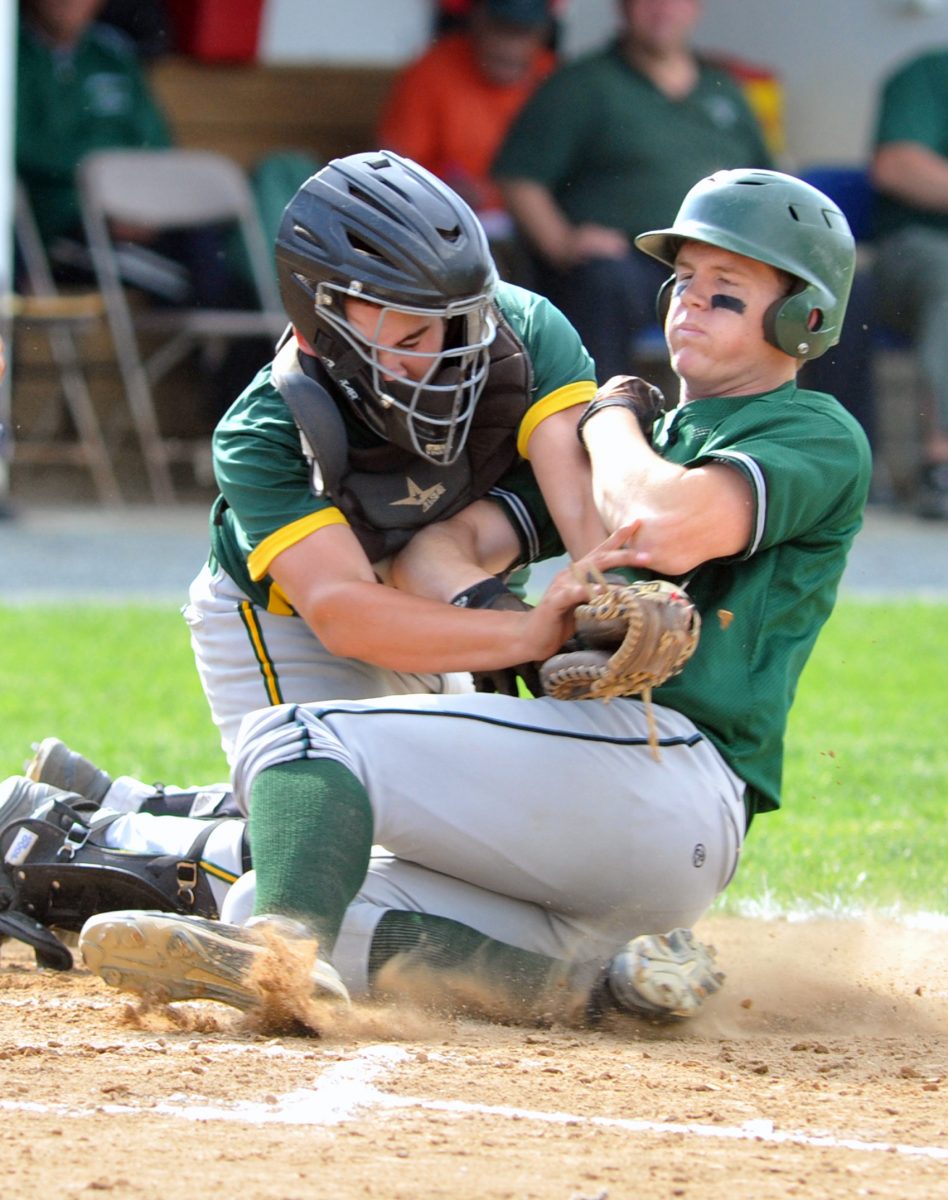 SOUTHWICK – When Billy Dupre first laid eyes on Jake Goodreau, he was taken aback that the imposing figure was only a freshman.
Dupre himself was a freshman, in his first season as head coach of Holyoke Catholic, and when he brought his team up against Southwick-Tolland, there was one thing that stood out instantly.
“I didn’t know he was a freshman,” Dupre said of the 6-foot-3, 225-pound Goodreau. “I saw the size of him and thought, “That’s going to be a big strong player for the next four years for those guys. This kid is going to be a force to be reckoned with in the division.” 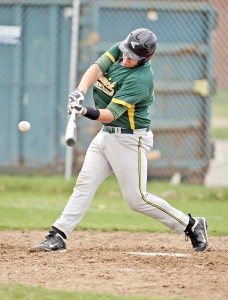 Now instead of having to game-plan against him, Dupre has been able to make a game plan for Goodreau as a first-year head coach at Southwick.
Having a slugger on your side is always a good thing, and it’s even better when that player comes with a high baseball IQ, a command of the team and the inability to get rattled when the pressure is on.
This is what Dupre has inherited in coming to Southwick, where Goodreau and company were quick to welcome their new bench boss.
“He’s a very smart player, he’s a great kid,” Dupre said. “From Day One, he sat in on the interview committee, and after I was hired, myself and my staff we met with the kids, stayed and talked to the captains quite a bit. He’s one of our captains. His baseball IQ is very high. He sees situations very well, and he understands his role, not only as a catcher, but he understands his role in the offense.”
A catcher for much of his playing days, Goodreau possesses the natural leadership skills that come with the position.
He has honed his skills behind the plate and matured through seemingly endless days and nights of practice. He has participated in numerous Perfect Game showcases, served as the Massachusetts representative at the Power Showcase Home Run Derby and has played for Team Connecticut Baseball and East Cobb while the high school season is out.
All of his hard work and dedication allowed Goodreau to make an early commitment to Boston College, doing so prior to his junior year, which unwittingly helped him gain a great comfort last season for Southwick.
“I think that definitely helped,” Goodreau said of making the early college decision. “After that, I didn’t have to worry about getting recruited anymore. I saw a significant increase in the amount of times I was able to hit the ball because I was so relaxed. My swing felt totally different, it was smoother. I was a very relaxed hitter, a very relaxed catcher. I honestly didn’t think it would make a difference, but it really did.”
Goodreau finished his junior season with a .306/.482/.452 slash line that was punctuated with 24 RBIs.
He also showed a much more patient approach at the plate, drawing 18 walks, though many were intentional.
“That was definitely something that came with maturity,” Goodreau said. “I can look back to my freshman year and say that no one really knew who I was, so that was not a problem for me, I got pitched to. Freshman year, I made a name for myself, so sophomore year was the year I struggled because I was still young and my hitting philosophy was hit the ball as far as you can every time.
“I didn’t get pitched to too much, so that kind of hurt me. After that season, I changed my approach and patience became a big part of it. I worked at-bats. I went from seeing one or two pitches an at-bat to now seeing four or five an at-bat.”
That kind of patience is rare for a high schooler with a big-bopper reputation, and it’s something that has carried over to his work in the field and dealing with the pitching staff and quarterbacking the defense. 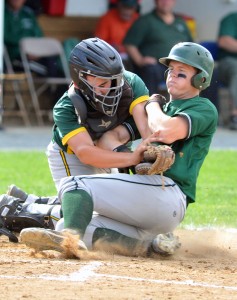 It’s an impressive level of maturity that is a solid foundation for a bright future, but for the senior slugger the time is now to capitalize on a four-year goal that he and his teammates have carried throughout their high school career.
“Something that’s never happened in the history of Southwick baseball, we’ve never won a Western Mass. championship,” Goodreau said. “There’s nothing more that I would love than bringing the first one (to Southwick). As a senior, I don’t want to leave without it.”
With a class of six seniors, the time is now for the Rams to strike. It’s unlikely that a small-town school will see the likes of a Jake Goodreau anytime soon, but there also must be other pieces that can help the cause on a short roster of 13 players.
“They’ve won the league, they want to win Western Mass.,” said Dupre, who highlighted senior ace Andrew Mitchell and senior outfielder Danny McClellan, a Roger Williams commit, and junior middle infielder Eddie Martinez as integral pieces to reaching that end. “It’s not individualized.”
In the final season of high school ball, Goodreau certainly has a lot weighing on his mind.
When his career at Southwick concludes, Goodreau will head west to play summer ball with the Pittsfield Suns of the Futures Collegiate Baseball League, before heading to what he hopes will be a fruitful career at The Heights.
But wise beyond his years, the kid knows that he can’t ignore either the present or what lies before him in the future, as both are important to the success of each other.
“It’s easy to think about what’s coming up next year and the big step I’m taking. It’s a very big jump,” Goodreau said. “But it’s also easy to forget because you get caught up in the moment. I’m playing with my best friends that I’ve been playing with since I was 10 years old.
“Sometimes you can very easily forget about the next step. I try not to. I try to balance both mentally pretty well because I have a lot of work to put in for next season and that’s something I can’t forget about because success at this level doesn’t mean I’ll be successful at the next level. I need to make sure I can maintain that.”