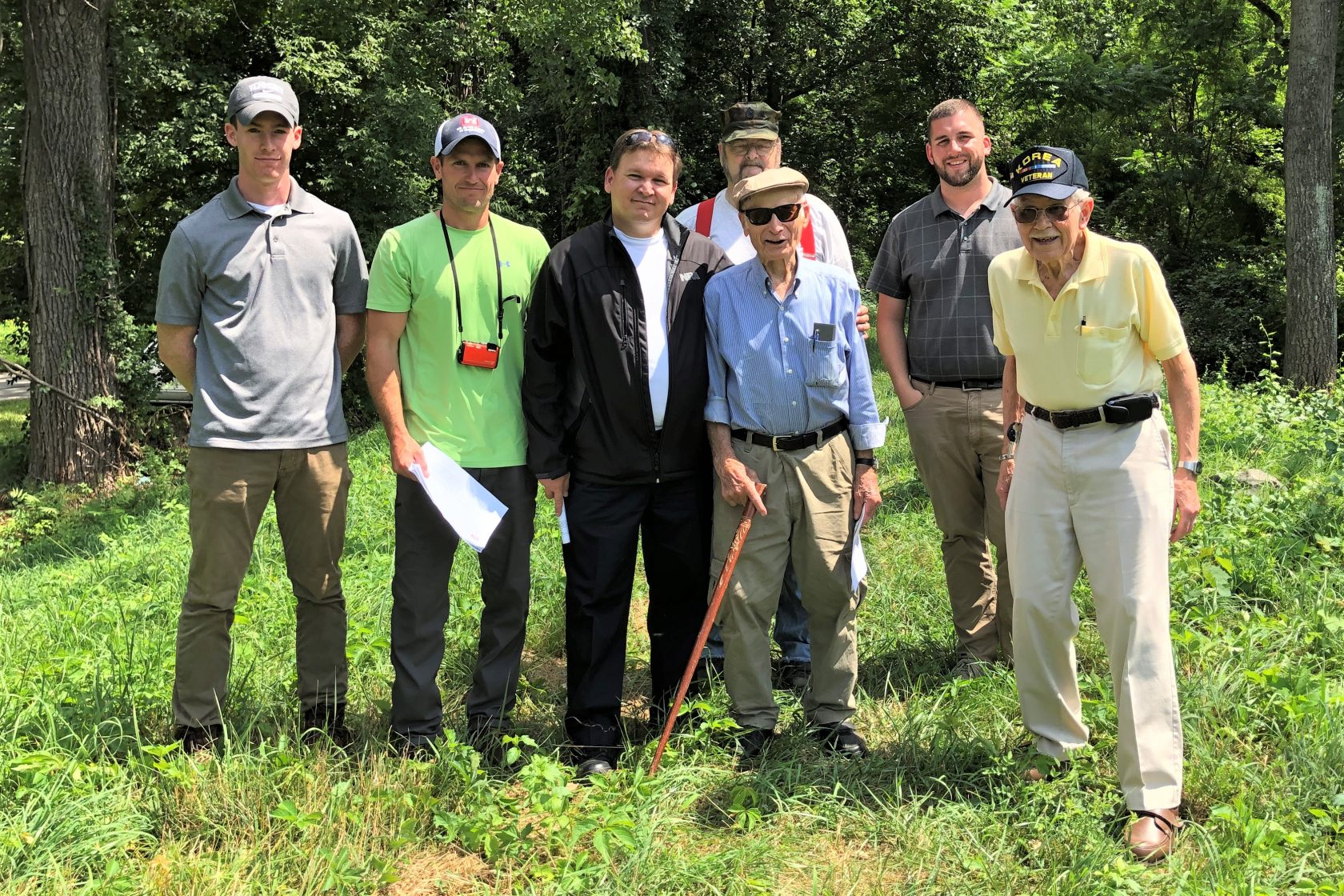 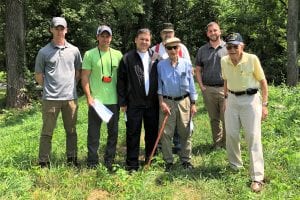 WESTFIELD – The United States Army Corps of Engineers (USACE) hosted its annual inspection of the Little River Levee on Thursday and inspectors say there is progress.

The annual inspections began in 2015 when the USACE declared and listed the levee as “unacceptable” and “wholly deficient,” according to the FCC’s 2019 annual report. A list of recommendations for the levee was given to the city.
USACE project manager Drew Cattano and intern Brennan O’Neil were joined by city Utility Engineer Matthew Gamelli and Westfield Flood Control Commissioners Albert G. Giguere, Jr., Mark Goodniss, Barry H. Plumley and Henry Warchol for the inspection.
The Little River Levee is 2,500 feet long, and was built by the USACE in 1955 following Hurricane Diane. The USACE inspects only 500 feet of the levee, the section they rebuilt in 1983 following another flooding event with the agreement that they would turn it over to the City of Westfield for operation and maintenance, and under the control of the Flood Control Commission. 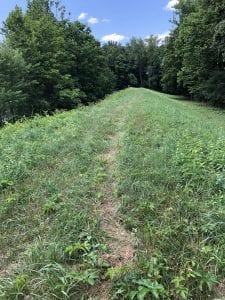 500 foot section of Little River Levee being maintained by the city. (Photo by Amy Porter)

On Thursday, Cattano noted that the levee was mowed at the top and 15 feet down the sides, as requested in the last inspection. Gamelli said they contracted out with Lubelczyk & Son this year, which does a lot of state contracts for flood control. He said they mowed in June, and will mow again in October.
During the inspection, Giguere and Cattano climbed down the bank to take a closer look at the culverts running from the Little River under the levee to a conduit on the other side. The culverts are collapsed and the covers broken, and no longer operate in the way they are intended, which is to open in order to drain storm water from inside the city to the river, and to close when the Little River rises, protecting Ponders Hollow Road, businesses and residents from flooding. Giguere said the levee is the only thing stopping the Little River from flowing into the city. 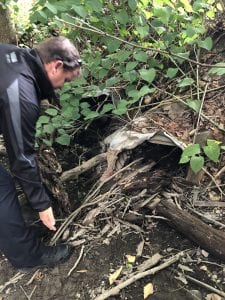 Cattano asked if the city could send a camera through the culvert to determine how much sediment is in there. Giguere looked through and said he could see light on the other side of one, while the other culvert was blocked. He said DPW Deputy Superintendent Casey Berube is looking into getting a camera down there to examine the culverts. Cattano said the video is a requirement of the inspection once every five years.
On the Ponders Hollow side of the levee, Cattano asked whether the emergency plan mentions sand bags for the culverts, to keep the Little River from flowing through during a flood. Giguere said Berube has 1,000 sand bags, which he believes are stored at the DPW yard on Ponders Hollow. They also discussed the possibility of using water bladder barriers as plugs for the culverts.
Giguere said the city has to renew its permit to clear the Westfield River floodway. When they do, they will get the funding to clear the conduit at the Little River location.
Gamelli said although there is no funding currently in the budget to repair and rebuild the Little River Levee, the city had the entire length surveyed by Sherman & Fryderyck Surveyors this past year. Based on that survey, City Engineer Mark Cressotti is speaking to property owners, and working on options for getting right of ways for the whole 2,500 length, in preparation for future work by the city.
“That’s a step in the right direction,” Cattano said. He said his report for the USACE will show tremendous progress with the survey and vegetation control on the levee. “Keep up the good work,” he said to the commissioners. 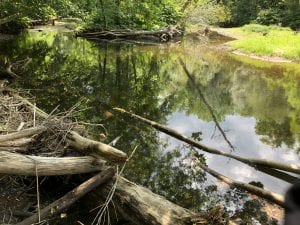 The Little River flows next to the levee. (Photo by Amy Porter)

Giguere said all of the flood control projects in the city are a priority, because they weren’t maintained for decades. He said they are now making progress due to the commissioners keeping the City Council, mayor and the public informed on what the city is doing, and why they are doing it.
However, he said among the priority projects, the first is getting the sewage bypass for the Williams Riding Way Pump Station fixed, which he said is the only thing pumping sewage out of the south side of the city.
Number two in priority projects are both the Armbrook Dam, which is being assessed by the Natural Resources Conservation Service (NRCS), followed by the Powder Mill Dam, which has been approved for assessment. After the dams have been assessed and the engineering design done, the necessary work on the dams will begin.
“We’re a few years out for the Little River Levee,” Gamelli said.
Also needed are new members on the Flood Control Commission. Warchol, who Cattano referred to as a “legend,” declined to say how long he has been a commissioner, but said Giguere keeps saying he will find his replacement. Currently, the five member board is already short one member.