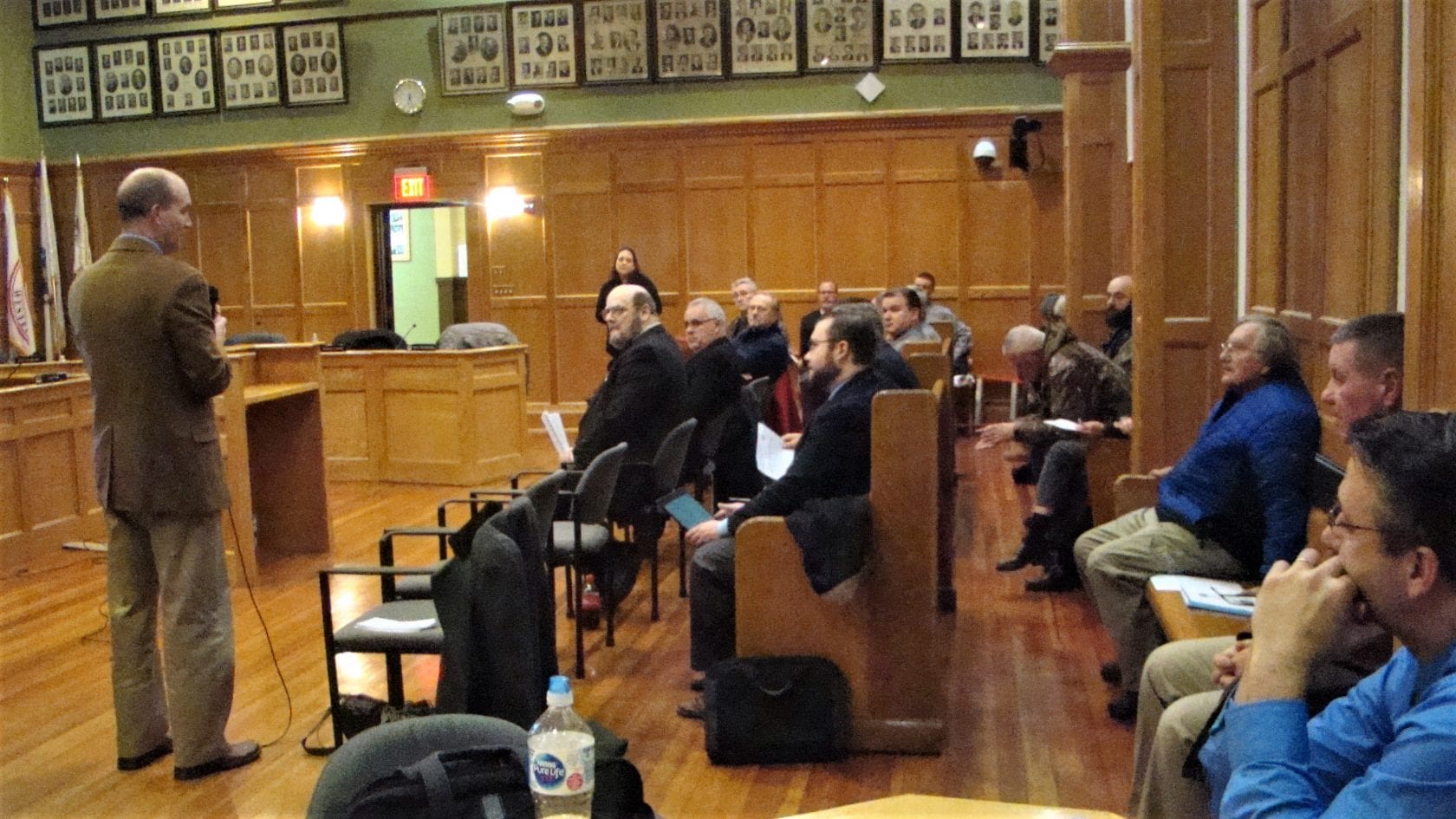 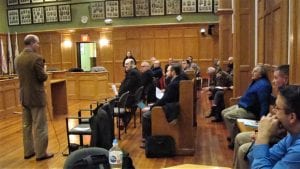 WESTFIELD – Engineer Deron Davis of the Natural Resources Conservation Service (NRCS), a division of the U.S. Department of Agriculture, and Allen B. Orsi, vice president of Pare Corporation, who NRCS has hired to assess the condition of Arm Brook Dam spoke to a well-attended public hearing on their findings to date on Thursday.
Davis said that the dam, built in 1963 by their predecessor the Soil Conservation Service has been serving its primary purpose of flood control with some recreation for fish and wildlife, which is why there is a storage pool in the dam. He said the NRCS has built 30 dams in Massachusetts of the 12,000 in the U.S. over the years, and is currently rehabilitating six of them to extend service life and upgrade standards.
Davis said the NRCS is not a regulatory agency, but offers technical and financial assistance primarily to farmers, and also to government-managed watershed projects. The City of Westfield owns Arm Brook Dam.
Davis said they are in Phase I of the project, which will assess the dam and upgrade the watershed plan. He said the assessment, which began in October, has found that the dam does not meet current day criteria, and is not functioning as it should. Several factors include more impervious area above the dam, which brings in water faster, and more rainfall.
At-large Councilor Dave Flaherty asked what the consequences would be to the city if the dam fails. Davis said he couldn’t give an answer right now, but that it would be part of the process. City Engineer Mark Cressotti asked for a timeline, and when they might expect to get that answer. Davis said Phase I involves data crunching, and more answers would be given at the next public hearing next summer or fall. He also said he couldn’t give any cost projections at this time. 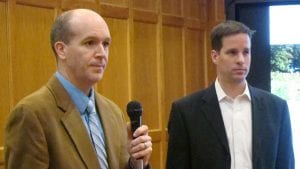 Orsi gave an overview of the dam and how it functions. He said hopefully the rehabilitation on the dam would extend its life for another 50 years, calling the dam “a sleeping giant” that people may not notice but that does its job.
He said currently they are drilling for geotechnical evaluations, doing topographic and bathymetric surveys, and looking at the drainage system by putting in cameras in the series of pipes. He said they are also performing underwater inspection of the spillway riser, the concrete box leading to the pipes in the pool.
As a part of the analysis, they will also be collecting and analyzing sediment from the storage pool bottom, and comparing the existing pond bottom with the original from 50 years ago.
Flaherty asked if electricity could be generated at the dam. Orsi said theoretically yes, but practically it was not large enough to be cost effective.
City Council President John J. Beltrandi, III asked if there was a plan to remove sediment from the pond. Orsi said not currently because they don’t know the amount of buildup, but that would be one of the alternatives.
Orsi said the pool was designed to store water in a 100 year flood event and come down in 10 days following such an event. Orsi said at this time there is no plan to increase the level to a 500 year flood plain. The spillway designed to take overflow from such an event is also being evaluated for erosion, loss of protection (grass), and discontinuity from compression on the walking path. He said they will do a study of impacts, including what if the dam were not there.
WRAFT (Westfield Residents Advocating for Themselves) member Kristen Mello asked whether rain from the Air National Guard base runs into Arm Brook Dam, which Orsi said it does. He said developments such as the ANG would be looked at to make sure that water wasn’t diverted from the watershed.
Orsi said the next phase of the project, pending funding, would be to develop alternatives for the dam, including raising the top of the dam, widening the dam, non-structure alternatives and de-commissioning. They would also incorporate any recommendations from the city and comments from the public.