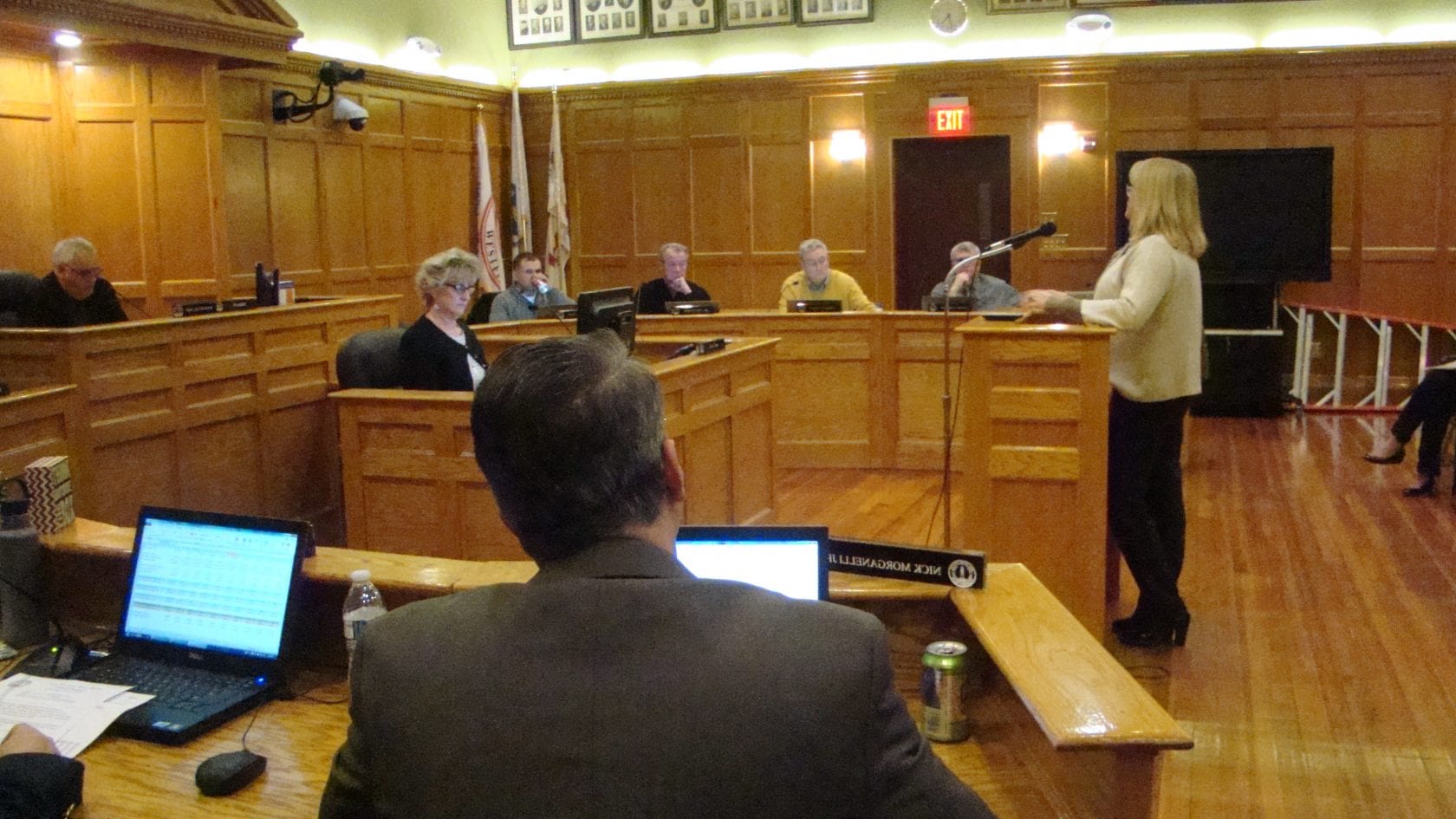 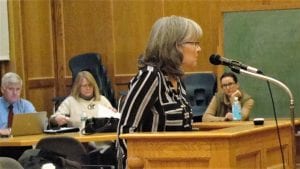 Chamber of Commerce Executive Director Kate Phelon speaks to the City Council on behalf of a business-friendly tax shift. (Photo by Amy Porter)

WESTFIELD – Only two members of the public, Kate Phelon and Matthew Roman attended the public hearing on the tax shift at Thursday’s Special City Council meeting. Phelon spoke on behalf of the Westfield business community that she represents, and Roman declined to comment. Councilors commented on the lack of public input, and forged ahead with their own, ultimately voting for a tax shift of 1.66 that slightly favored residents.
The hearing began with comments from City Assessor Robin Johnson, who gave a brief recap of historical shifts in the city, ranging from a low of 1.43 in 2003, to a high of 1.75 in 2007; although she said the shift has mostly ranged from 1.63 to 1.70. Last year, the City Council voted for a tax shift of 1.65, setting the rate at $36.82 per $1000 for businesses, and $19.36 per $1000 for homeowners.
Johnson said the city had $1,353,111 in new growth, $600,000 of it from personal property taxes, and “every bit of that hard-earned.” She added that several businesses that had received special tax assessments for a period of time were going off in the next few years, including Whip City Aviation this year, Prolamina and Home Depot next year, and Tell Tool and Boise Cascade in two more years.
Phelon gave a plea for fairness, asking that councilors reduce the burden to businesses with a shift of 1.61, which she said would impact the residents by an increase of only 20 cents per thousand.
“We are certainly not treating our businesses fairly, when year after year you put more burden on them with the shift favoring residents. The residents don’t have employees to pay, a business to grow or expand. The residents get their trash picked up and businesses don’t,” Phelon said, illustrating that only Holyoke and Springfield have a higher rate for businesses in surrounding communities. She touted the philanthropic donations of local businesses to the community, and said a shift of 1.61 would send a message that Westfield wants them to stay and grow.
Phelon also suggested that the City Council focus on reducing or controlling spending before reaching the levy ceiling; and to use Free Cash to reduce the tax burden.
Earlier in the meeting, the City Council had voted in favor of Mayor Brian P. Sullivan’s request for an appropriation of $1 million from certified Free Cash to reduce the Fiscal Year 2019 tax levy, with At-large Councilor Dave Flaherty and Ward 5 Council Robert A. Paul, Sr. opposed to using Free Cash for that purpose. The Council also unanimously approved the Mayor’s managed reduction appropriation of $200,000 for the current year’s budget, with Ward 3 Councilor Andrew K. Surprise commenting that some of the items being reduced had been proposed as cuts by the Finance Committee in June.
Coming to the microphone as a resident, Councilor Paul made the point that commercial businesses come to Westfield due to its infrastructure; the best internet, most consistent power, and best gas rate. “That’s why high tech is coming to Westfield,” Paul said, adding, “That whole investment is a partnership we made to build the businesses.” Later in the meeting, Paul stressed that the residents in Ward 5, which he represents, don’t want a tax increase.
Also coming to the microphone during the hearing was At-large Councilor Nicholas J. Morganelli, Jr., who said his personal real estate taxes have doubled in the last fifteen years, and yet he wouldn’t mind a tax shift favoring local businesses. He said the quality of life for his family has been enhanced by local businesses and their generosity.
Flaherty commented from his seat that in order for residents to pay the same taxes as last year, the shift would have to be 1.73.
“We are not getting a lot of input from residents today,” said Ward 1 resident Mary Ann Babinski, adding that she hears the councilors giving the same speech every year. She said she regretted that there is not a plan to tax small businesses and large businesses differently, in order to approve something more fair.
At-large Councilor Cindy C. Harris commented that over the last several years, she had suggested many times separating the rates for small businesses and large corporations. “I will always suggest a rate that is beneficial to the homeowner,” Harris said.
At-large Councilor Matthew Emmershy said when the budget was approved, they knew taxes were going to go up. He also said he did not want to see any dramatic shifts, adding that many small businesses in town don’t directly pay property tax, but do pay through rental increases.
“One aspect of this is businesses depreciate, and the value of the commercial property tax is coming down,” commented At-large Councilor Dan Allie, adding that the value of residential property is increasing.
“We really need to deal with this at budget time. We set the tax rate when we passed the budget,” said Surprise.
Going to motions from the councilors, Harris made a motion for a tax shift of 1.69, which Flaherty amended to 1.61, and Surprise amended to 1.63.
“The consequences for the residents of 1.61 are all unfavorable. Every resident will understand the proposal is grossly unfair,” said Paul. Emmershy made a motion to amend to 1.64.
“The people in Ward 6 do not want a shift. The number I’m going for is 1.65, leaving it where it is,” said Ward 6 Councilor William Onyski. Council President John J. Beltrandi asked for a roll call vote for 1.65, which failed by a vote of 6-5, with a simple majority of seven required. Councilors Brent B. Bean, II and Ralph J. Figy were absent from the meeting.
Paul then proposed a tax shift of 1.66, which passed with a vote of 7-4.
Flaherty said the new tax rate will be $19.70 per $1,000 for homeowners, a difference of $12.50 a year for an average home valued at $250,000, and $38 per $1,000 for businesses.