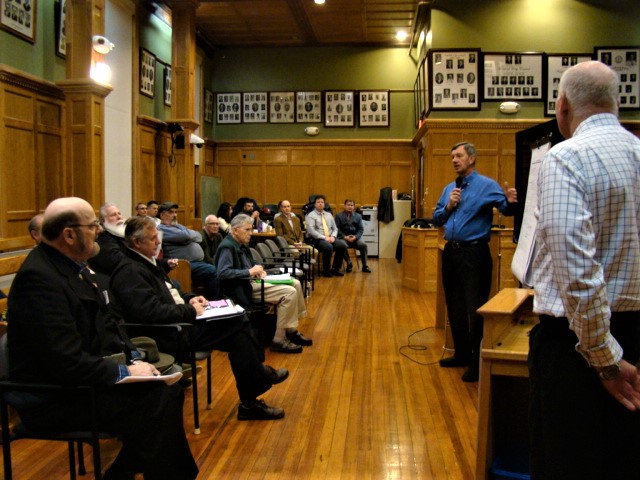 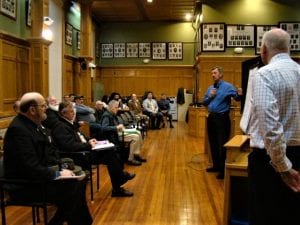 Engineers for the federal government describe the Powdermill Brook Dam project at a public hearing on Wednesday. (Photo by Amy Porter)

WESTFIELD – Flood Control Commission Chairman Albert G. Giguere Jr. introduced Engineer Deron Davis and Project Manager Jim Lyons of the Natural Resources Conservation Service (NRCS) at a public hearing Nov. 13 on the Powdermill Brook Flood Control Reservoir dam rehabilitation project.
Powdermill Brook Dam has been accepted by the NRCS for federal assistance, following the application by the FCC on behalf of the City of Westfield. The NRCS is currently assessing the Arm Brook Dam, which was also accepted into the program in 2018. Both dams have reached their 50 year design lifespan, and together control 40% of Westfield’s watershed.
Giguere said the Powdermill Brook Dam passed its 50-year design lifespan several years ago and has a number of serious problems. The small reservoir is heavily silted-in, with few small trees growing in the middle of what should be the impoundment area, blocking the drainage tower’s bypass gate valve, making it inoperable. He said there are also significant erosion issues on the crest and both faces of the dam itself, caused by decades of illegal all terrain vehicles and other vehicle use on the dam.
“Overall, the dam is safe, but it needs a complete rehabilitation,” Giguere said.
At the hearing, engineers from Alterra Solutions, the contractors hired to assess Powdermill Brook Dam, agreed that the dam is safe and in fair condition.
Planner Jim Sweeney said the dam was constructed in 1965, and is 55 years old. He said it is considered a high hazard structure because of the consequences to human life and infrastructure if it were to fail. Sweeney said the assessment will determine whether the dam qualifies for rehabilitation.
Aterra engineer Carl Gustafson said the dam was built following a storm of record in August of 1953, which brought 20 inches of rain in 24 hours. He said in 2010, Hurricane Irene dumped 10 inches in 24 hours, adding that there is a history of a significant flooding event every ten years.
Gustafson said the dam now receives more runoff water than it was originally designed to handle, and the concern is the potential for overtopping during extreme events. He said they will be looking at ways to prevent that from happening.
Sweeney said alternatives following an assessment could include to relocating structures downstream, flood proofing, decommissioning the dam, widening or lowering the spillway, raising the dam, or covering it in concrete. He said they could recommend either replacing, repairing, upgrading or decommissioning the dam.
Aterra engineer Wade Biddix spoke more specifically about the Powdermill Dam, which he said was last assessed in 2010. He said the normal pool area of the dam holds 5 acres of water, but can swell to 68 acres. Although not imminently in danger of failing, the condition is listed as fair due to significant erosion and sediment storage in the pool.
Biddix said initial site visits to the dam are being done this week. He said the purpose of the project will be to maintain the original flood protection, minimize the impacts from rehabilitation, and to reduce risk of flooding.
At-large Councilor Dan Allie asked what would be the time frame for the assessment and the decision.
Sweeney said the assessment is beginning now, and should be completed by August to September of 2021. Once a final plan is in place, the city would choose whether to go to the design phase. The planning phase is paid 100% by the USDA. He said the design phase, which takes a year, can also be paid 100%. 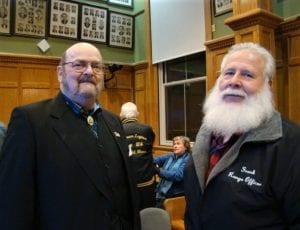 Flood Control Commissioner Mark Goodniss and resident Frank Woodard discuss the history of the dam after the hearing. (Photo by Amy Porter)

The construction is paid 65% by the federal government, and 35% by the local body, which can also be the state. There is an in-kind services option, where services towards the project may also be counted in the 35%. Construction would begin at the earliest in 2023, and potentially later.
Davis said no money is required up front, but the NRCS wants to see the city making an effort, and continuing the conversation with them if they are going to spend the funds.
Ward 1 Councilor Mary Ann Babinski, liaison to the FCC, said there have been several meetings on Arm Brook Dam, which began the assessment phase in 2018. A public hearing on the findings and alternatives for Arm Brook will be held in January, 2020.
Frank Woodard, who grew up on Montgomery Road and said he saw the results from the flooding in ’55, asked how much of the problems were caused from non-maintenance of the dam.
Giguere said the FCC has fought tooth and nail to get flood control issues addressed. He said the mowing has been maintained, and they have tried enforcement to keep ATVs off the dam, adding that whenever the highway department puts up locks on the gates, they are cut immediately.
“It’s a serious safety issue. I joined the FCC because of what almost happened during Hurricane Irene,” Giguere said, adding, “We do what we can on a shoestring budget.” He said the FCC’s budget has been increased under the last two mayors, but is still not funded enough to do everything.
“We have an exceptional Flood Control Commission,” said At-large Councilor Cindy Harris. She said they work diligently and have produced reports on all the dams in the city.
Sweeney said the structure is 50 years old, and was designed for 50 years of life. He said it has functioned the way it was supposed to as a sediment track.
The complete public hearing was taped and will be replayed on Channel 15 Community Television.