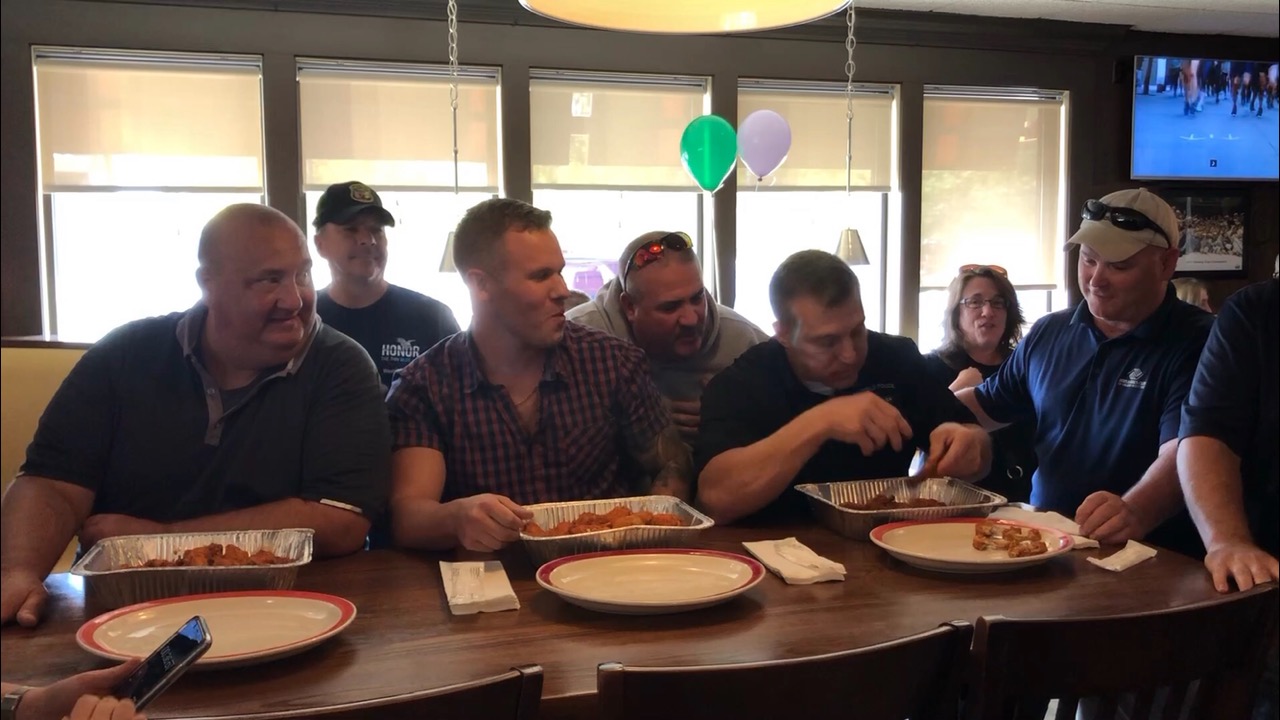 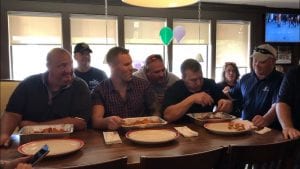 Fellow Officers look on as Police Lt. Kevin Bard (standing, right) eats as many hot wings as he can at once. during the wing eating contest between the police and fire departments. (Photo submitted)

Boys and Girls Club Chief Advancement Officer Bo Sullivan said that the 99 raised about $6,000 more than they had the previous October. He said that the Westfield 99 location raised the most amount of money out of any of the restaurant’s locations in New England.

“When you get the 99 and the Boys and Girls Club working together, you can do that,” said Sullivan.

In total, more than $500,00 was raised for Boys and Girls Clubs across the northeast.

“This will be a part of our operating budget for us in support of all the programs we manage,” said Sullivan.
While more than $28,000 was raised over the course of the month, $22,800 from that total was raised on Oct. 25  during the 99’s celebrity bartender night alone. During that night, well-known figures in Westfield went behind the counter to serve drinks to customers in order to earn tips. Those tips were donated directly to the Boys and Girls Club.

The 99 also played host to some competition between the Westfield Police and Fire Departments as part of the fundraiser. They hosted a hot wing eating competition between the two emergency departments, which was won by the fire department by a difference of one wing. In the police department’s corner was Kevin Bard, Scott Schuster, and Terry Manos. Representing the Fire Department was Travis Lucia, Ryan Chenervert and Keith Supinski.

In addition to the celebrity bartender night and the wing eating contest, the 99 also hosted a family fun day and a paint night as part of the fundraiser. The 99 also had select menu items that, when ordered throughout October, would have a certain percentage of the bill donated to the Boys and Girls Club.

The Boys and Girls Club will be having other fundraisers in the near future, including the “First Race” 5k run fundraiser on New Years Day, and the club’s 50th Anniversary Gold Gala at the Tekoa Country Club on Feb. 8.