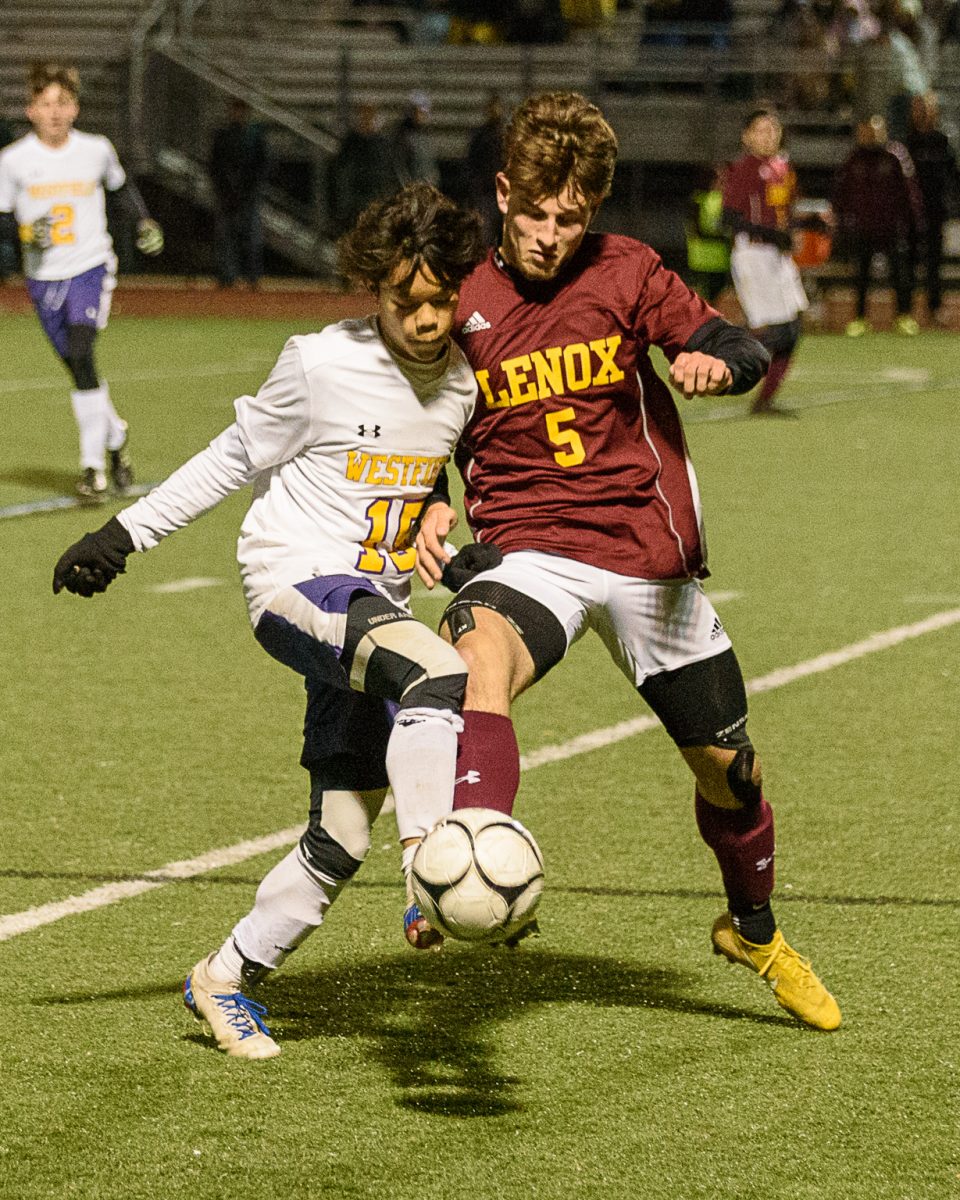 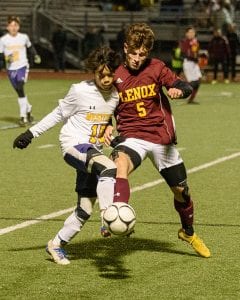 CHICOPEE – The Westfield Technical Academy boys soccer team battled back the two-time defending Western Massachusetts Division 4 champions, Lenox, for the entire first half of Thursday’s semifinal game at Chicopee Comprehensive High School.
Westfield Technical Academy also held off Lenox in the final 40 minutes of regulation … for an entire 10-minute overtime period … and another five minutes, six seconds of a second OT.
For 95 minutes, Lenox and Westfield Tech played to a scoreless tie. It’s what came in that 96th minute though that sealed the fate of the Millionaires and Tigers.
Lenox’s J.T. Novitsky crashed through a sea of players – the end result of a strong offensive wave – scoring the game-winner with 4:53 remaining in regulation to lead the second-seeded Millionaires past the No. 3 Westfield Tech Tigers 1-0.
The opportunities to score were few and far between for the majority of the game.
The first such chance came in the 10th minute when Lenox launched a laser in the lower left corner of the net, but Westfield Tech junior goalie David Antonovoschi made a diving save.
Westfield Tech (18-3-1) later countered when Adam Strycharz made a strong run down the left side of the field with a defender draped all over him. Strycharz managed to get off a shot, but it went just wide of the left post.
Both defenses continued to stifle the opposing teams’ offenses. A simple pass was a challenging feat; no shot had a clean path to the goal.
In the 67th minute though, Lenox’s Andre Collins hammered a shot that ricocheted off the underside of the crossbar and into the arms of Antonovoschi. A short time after, Tigers senior sweeper Dan Kontsimal slid across the path of the goal to knock away another Millionaires’ shot, and the defense stood tall to turn away a subsequent corner kick.
Westfield Tech’s defense prevailed again in overtime. The Tigers succeeded in shutting down Lenox (9-8) on two consecutive corner kicks, the second of which resulted in a goal that was overturned by an offsides call.
Halfway through the second overtime, a strong offensive push by Lenox resulted in a 4-on-3. The Millionaires raced upfield, delivering the ball deep into the middle of a crowded penalty box, where Novitsky finished off the game-winning play.
“I felt we had momentum as the game was going on,” Westfield Technical Academy boys soccer head coach Kyle Dulude said. “We had them in check, denying them where they wanted to go.”
It ultimately just came down to a numbers game on that final play.
“We missed a goal two or three times by just inches,” Dulude said. “If we scored first, we could’ve put a lot of pressure on them.”
Instead, Lenox pressed on to the finals against Monson, seeking its third consecutive West Sectional title.
“Our seniors all played great,” coach Dulude said. “We stuck together as a team.”