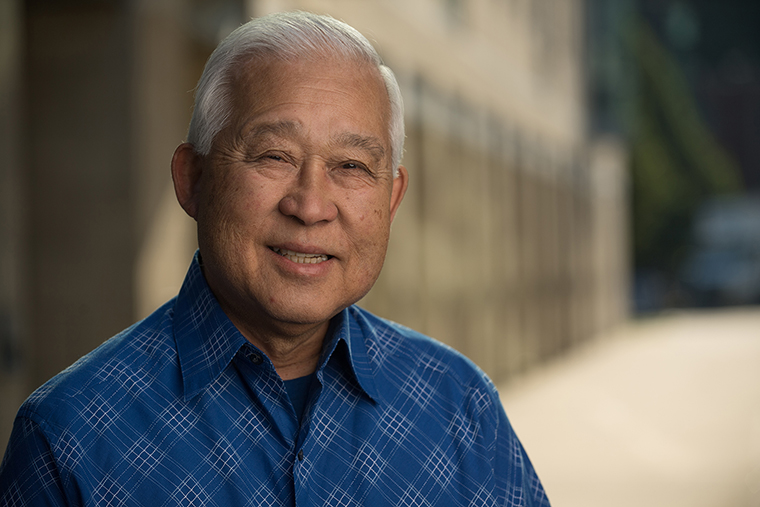 WESTFIELD – Interim Westfield State President Dr. Roy H. Saigo knew when he took on the job that he would have to contend with a global pandemic while standing in as the head of a state university for a year.

After the retirement of former Westfield State President Dr. Ramon S. Torrecilha last July, Saigo took the reins for a year while Westfield State searched for a long term president. Saigo had led universities in the past, but when he took on the Westfield State job as interim president, he did so at the beginning of what would become the most difficult year in modern educational history.

“Well, it was certainly very different. It was not business as usual,” said Saigo.

Saigo, 80, was more accustomed to working with people face-to-face, as most people had been before COVID-19 forced most aspects of work and life to be moved online. When isolation from other people became the norm, Zoom became the platform to connect with friends, family, and colleagues.

“We did adjust quite a bit from face to face to pretty much 100% zoom,” said Saigo.

Saigo lived on the Westfield State campus in New Hall for a couple of months, as other presidents of the university have done in the past. He said he used that time to try to get to know some of the students, faculty, and staff. He ended up developing “a wonderful relationship with many of the students.”

Throughout the pandemic, the general isolation and subsequent reliance on video calls was typically considered to be frustrating and an unnatural way for humans to socialize. Saigo at first thought he would feel the same way, but he said he developed a different perspective after some time.

“It was strange because I was thinking, face to face we became friends by having meals, getting to know each other, seeing each other,” said Saigo, “I found that Zoom was even more intimate.”

Working from home via Zoom allowed people to see at least a small part of their colleague’s homes and families. Saigo said that he would be meeting with student government association leaders via Zoom while they were in their homes when a family member would casually walk by in the background. He said he would have people’s family members come to the computer to introduce themselves to the rest of the call.

He described one Zoom meeting in which a woman’s five-year-old daughter walked by, and he asked if he could say hello to her. He said they gave each other a high-five through the screens, and she later sent him a stick figure drawing. This interaction would never have happened in a world that wasn’t relying on video calls.

“I learned that I can adjust in my late age. A lot of people say old dogs can’t learn new trIcks, but I learned all kinds of new tricks,” said Saigo, “Technology is something new, but we all adjusted. I have made lifelong friends through Zoom and a few emails and phone calls.”

One of the challenging moment’s of  Saigo’s tenure as interim president was in November. The third U.S. wave of COVID-19 was just beginning to sweep across the country, and case counts were beginning to rise locally, including on campus. Lansdowne Place, the downtown university apartment building that was used to quarantine students, rapidly became full.

Saigo made the decision to shut down all in-person activities and classes and close the campus just before Thanksgiving, a decision that did not come lightly.

“The main concern was the safety of our students and, of course, their families,” said Saigo, “I knew they would have vulnerable parents and grandparents. We had to make that decision.”

When students returned to campus for the Spring 2021 semester, Saigo and his administration used that moment and the lessons learned from it to keep the campus safer and avoid another campus shut down. A contingency plan was in place for if the COVID-19 infection rate climbed out of control again, but it ultimately was not necessary.

“We had a threshold number where we would have to make a decision. We tested students every other week in the fall. We increased it in the spring to every week,” said Saigo, “I think the students were very attuned to our concerns. They all came to the realization that they had to monitor themselves as well as their families. The testing reinforced that.”

Saigo had already attempted to retire twice in the past before taking the Westfield State position. When Dr. Linda Thompson was selected as the next permanent Westfield State University president, Saigo joked that his wife, Barbara, would have to find someone to “de-program” him so that he does not feel the urge to go back to work. As of now, he already has retirement plans to keep him occupied.

“We are already looking forward to camping in eastern Oregon on the coast and going fishing,” said Saigo.

Saigo said he feels good about what he is leaving behind for future students.