WESTFIELD – ITI literally and figuratively pitched in to take down its most recent opponent. 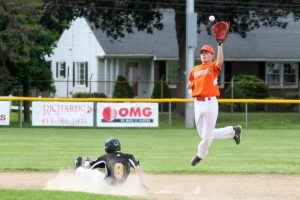 RBIs from Carlos Rodriguez and Ty Leonard made it 3-2 in favor of ITI. BIG tied it 3-all in the top of the third.
In the fourth inning, Derek O’Day scored the eventual game-winning run on an RBI single from Clay Bradley.
LaCourse had a very strong start for ITI, recording two strikeouts in the second inning and one in the third, a solid outing for the team’s 13-year-old pitcher. Medeiros was stellar in 3 1-3 innings of no-hit, no-run relief, Dukarski let up a harmless single before recording the final two outs.
“All three pitchers just played it perfectly,” ITI manager Matt Medeiros said. “All year it’s been a team effort – every kid knows their role; every kid plays their role. Even if there’s a mistake, it’s short-lived. The kids don’t dwell on it.”
ITI has little time to dwell on anything – negative or positive – advances to play Camfour.

DAN WELCH (CITY) CUP
No. 3 Advance Manufacturing, No. 2 Sons of Erin
For the second consecutive game, Advance jumped out to a fast 2-0 lead in the first inning.
This time, Paul Shibley reached on an infield error, and was brought home on a line drive double to right center field from Ryan Paro. Dennis Hall then plated Paro with a clutch two-out double for the early lead.
In the third inning, Advance increased the lead to 3-0. Spencer Cloutier led off with a bloop single, stole second and advanced to third on a wild pitch. Sons’ starter Darrin Roberts bore down and induced two infield pop-ups, but James Renaudette beat out a two-out push bunt just past Roberts to plate Cloutier.
Sons battled back with two runs in the fifth. Ryan Paro had started and given up a hit and no runs over the first three innings. He was relieved by Renaudette who pitched a scoreless fourth, but walked the first two batters of the fifth. After a wild pitch, Logan Symmons RBI groundout put the Sons on the board. During the next at-bat, Renaudette threw wildly to third, attempting to pick off Zach Hall bringing him home with the second Sons’ run. Renaudette finished the inning holding the slim one-run lead. Advance brought in Spencer Cloutier to close the door over the final two innings with no one reaching base.
Darrin Roberts took a tough loss pitching an absolute gem. Roberts gave up just four hits, no earned runs in the complete game outing with five strikeouts.
Paro got the win, giving up one hit over three innings. Cloutier recorded the two-inning save.
In the end, taking advantage of errors, a couple of timely hits, and outstanding defense were the key to Advance’s win.
“My quote to may team before both of our games was ‘the team who makes the least mistakes will move on,’ and in both instances, we played cleaner than our two opponents,” Advance Manufacturing manager Denis Cloutier said.
They move on to the Dan Welch (City) Cup finals scheduled at Bullens Friday night to face the winner of McDonald’s and Sons of Erin, who play Thursday night at Bullens at 7:30.

McDonalds East Main Street 8, Westfield Bank 2
Pitcher Greg Serna-McCarthy delivered a complete game effort, the outfielders tracked down a lot of balls, and McDonald’s managed to defeat a team it had struggled against all season long, winning when it mattered most.