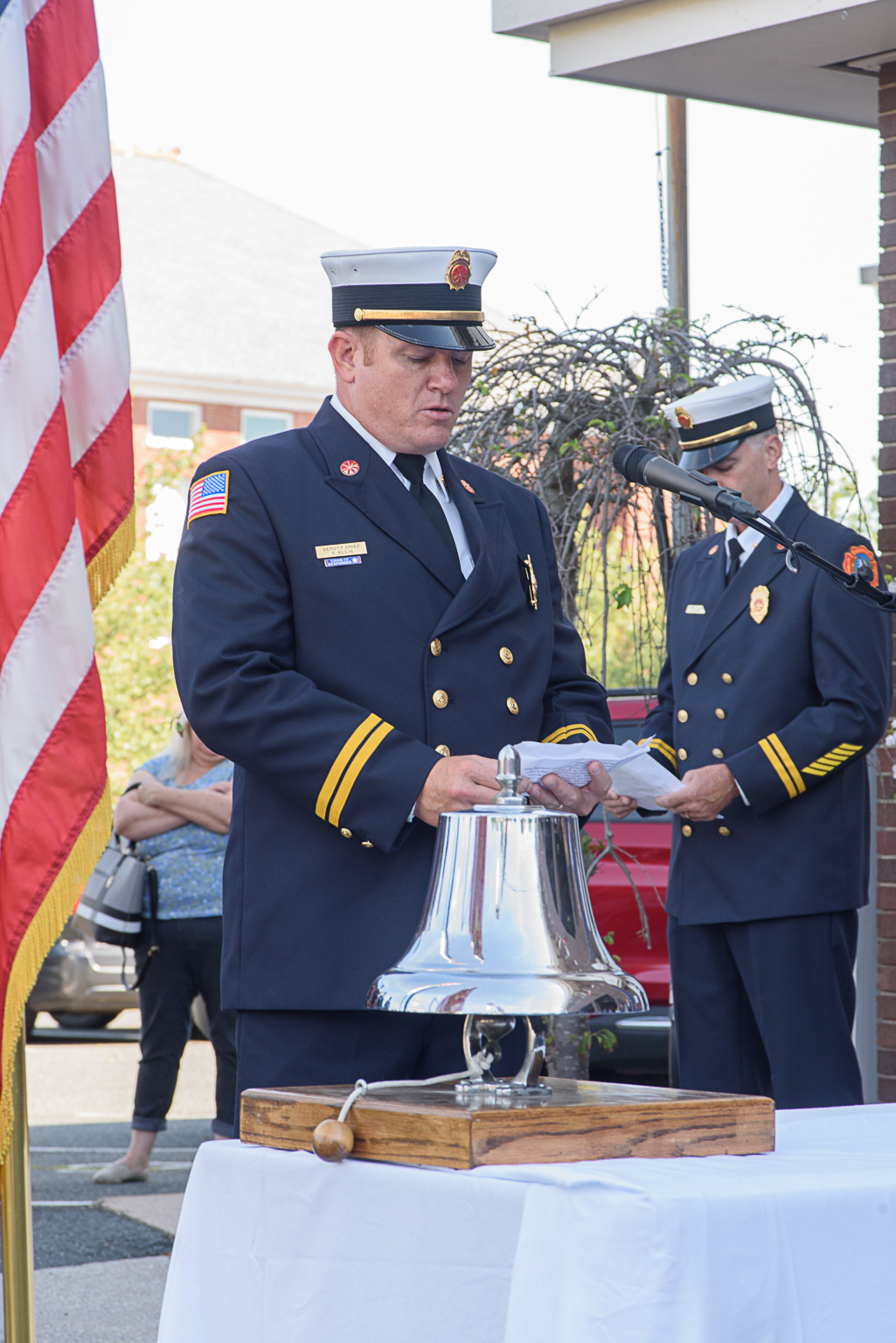 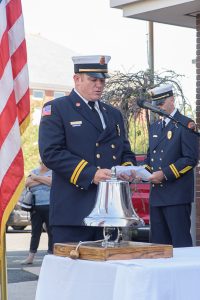 WESTFIELD — The city of Westfield remembered the tragedy of Sept. 11, 2001, across three ceremonies throughout the day on Saturday to recognize the Westfield residents who were killed in the attacks and the first responders who died in the line of duty.

The first ceremony began at 10 a.m. at the Westfield Fire Department Headquarters on Broad Street. The street itself was closed off for the ceremony for the first time, to cut down on traffic noise and to allow for more spectators on the 20th anniversary of the terrorist attacks.

Fire Chief Patrick Egloff opened the ceremony by acknowledging the passing of James F. Shea and Mary C. Trant, family members of Daniel Trant and Tara K. Shea-Creamer, earlier this year. Tara and Daniel, along with Brian Murphy, were Westfield residents who died in the Sept. 11 attacks.

“Today, we remember the bravery and sacrifice of firefighters, EMS providers, police officers, and other first responders who gave their lives in the service for others,” said Egloff.

The Rev. Joe Soltysiak then led a remembrance of those who died in the attacks, as well as their family members who have since passed away.

“On the 20th observance of this terrible attack on our country, we continue to remember the families who suffered great losses of their loved ones, and we will never forget them,” said Soltysiak, “And we will never have them back.”

Following the lowering of the flag to half-staff and a minute of silence, Deputy Chief Patrick Kane conducted the Firefighter’s Prayer, and Fire Capt. Joseph Szenda conducted the ringing of the five bells. A bell was rung in four sets of five times, representing the signal that would be sounded when a firefighter was killed in the line of duty.

343 firefighters were killed in the Sept. 11 attacks.

A second ceremony took place at the Sept. 11 memorial obelisk on North Elm Street, where the names of Shea-Creamer, Trant and Murphy are memorialized. Humason acknowledged the recent passing of James Shea and Mary Trant, who had attended the Westfield Sept. 11 memorials nearly every year.

“That is hard. That is a part of time marching on. That is why it is up to us to continually be here to remember, every year,” said Humason.

Matt Trant, son of Mary Trant, said that he was asked to speak on behalf of James Shea, as well, but that he thought that those shoes would be too big to fill.

“The example that they set at this place, every year, was one of strength, one of faith, one of courage. That, I think, is something we need to remember here today. That is an example we all need to carry, not just remembering  the people that died that day, the people who sacrificed so much,” said Matt Trant, “But the coming together, and the moving forward, is an example that those two people reminded us every year.”

Kevin Shea, brother of Tara Shea-Creamer, spoke about his journey to come back to Westfield to honor the life of his sister, and now his father, after he died in February.

“Often times when you heard about my dad, he would say ‘God, family, country,’ but I think  we can simplify it a bit and say ‘God, family, and Westfield,’” said Kevin Shea, “Westfield is really his sweet spot. This is what his version of the country was.”

Members of the victims’ families then brought a wreath to lay in front of the obelisk, a tradition in Westfield each year during the Sept. 11 memorial services.