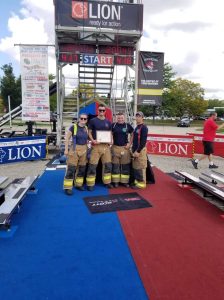 Fire Capt. Michael Hawthorne and firefighters Michael Feyre, Roseanna Lacas and Kyle Roy took part in the FCC relay event Sept. 18 in Pittsfield while representing Westfield Firefighters Union Local 1111. In doing so, they qualified for the World Challenge. They participated along with seven other newly formed relay teams, and Hawthorne said that they were the only team out of the seven to qualify with a time under two minutes. They completed it in 1 minute, 56.43 seconds.

The four Westfield firefighters had decided to form the relay team almost on a whim after Hawthorne said he saw an ad on Facebook for the FCC. He said he had known about the event, but did not know until then that there would be a qualifier relatively close in Pittsfield.

The relay event consists of several different challenges that simulate fire fighting situations while the participants wear their full firefighting gear. The relay begins with a five-story stair climb while carrying a 42-pound firehose, which then must be placed in a box without the hose touching the ground.

Firefighter Kyle Roy during the victim rescue portion of the relay. (PHOTO SUBMITTED BY MICHAEL HAWTHORNE)

The team then moves to the forcible entry challenge that is meant to simulate the breaking down of a door during an active fire. The firefighters stand over a 160-pound beam and swing at it with a mallet until the beam moves a certain distance.

The next part of the relay is the hose advance, in which the firefighter sprints about 140 feet to pick up a pressurized fire hose before dragging it about 75 more feet through a set of doors. The hose must then be opened and the jet of water aimed at a small target.

The firefighters then move to the victim rescue. A 175-pound dummy must be picked up properly and dragged backwards a certain distance, simulating a firefighter moving a victim away from danger.

Hawthorne said the team was able to do some practice runs of the course before the live event. He cited the general fitness and endurance of the team as reasons for their success.