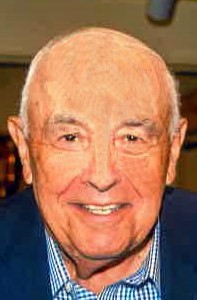 WESTFIELD: James F. Shea, a lifelong resident of Westfield, passed away February 28, 2021. Born to John and Anne Shea from Cahersiveen, County Kerry, Ireland on July 22, 1939, Westfield, MA. He was a 1957 graduate of St. Mary’s High School in Westfield. He earned his Bachelor’s and Master’s Degrees from Western New England College. He also served in the Army National Guard. He began his career at Van Norman Machine and Pratt and Whitney. James worked for the Westfield Public Schools for 30 years as the Business Manager, and for the last 5 years as the Superintendent. He was a lifelong member of the Sons of Erin. Active in his Catholic faith, he was a lifelong communicant of St. Mary’s Parish in Westfield. He also served on several local nonprofit boards: Cancer House of Hope, Sarah Gillett Elderly Services, the Chamber of Commerce, St. Mary’s Elementary School Council, Noble Hospital Health Alliance, and Westfield Academy. He was most proud of his Reading Group (Literary Gems) formerly at Mount Marie Health Care Center, Holyoke, MA. As a grandfather, Jim treasured his time with his grandchildren. He could often be seen at college campuses, soccer and football fields, cheerleading competitions, theatrical performances, band concerts, baseball fields, basketball courts, construction sites, or any activity that involved his treasured grandchildren. Jim loved to read, walk, golf, travel, and spend time with his family and friends. He was an avid sports fan who loved the Red Sox, Patriots, Celtics, Bruins, and the “Fighting Irish”-Notre Dame football.

James was predeceased by his beloved wife and high school sweetheart, Colleen Shea, in March 1995. Colleen and Jimmy shared a storybook romance for 34 years. On September 11, 2001, he lost his beloved daughter, Tara Shea Creamer. He is survived by his five children. His son, Kevin and his wife Kim, of Shawnee Mission, Kansas; Brian and his wife Katy of Westfield, MA; Maureen Shea and her partner William Hawe, of Amesbury, MA; Elizabeth Harris and her husband Sean of Westfield, MA; and Kellie DiFilippo and her husband Paul of West Newbury, MA. “Grandpa Big Jim” leaves behind seventeen grandchildren: Keegan and his fiancé Cathleen Church, Rylee, Brodie, Declan, Aiden, Shannon, Patrick, Jessica, Ashley, Casey, Sonny, Jacob, Colin, Nora, Mia, Jack, and Max. He is also survived by his son-in-law, John Creamer of Holden, MA. Jim leaves behind his cherished friend, Sue Emery, of Westfield. He will be missed by his Wednesday Golf League, his many friends from The Sons of Erin, and throughout the community of Westfield. He is survived by his cousins; Anne Goonan of Chicopee Falls, MA, and John Daly of Silver Springs, MD- who were truly a sister and brother to him. Jim also leaves several cousins from Cahersiveen, County Kerry, Ireland and the Boston area. Jim lived by a simple motto, “God, Family, and Country”.

Calling hours will be held on Friday, March 5th at the Firtion-Adams Funeral Service, 76 Broad Street, Westfield, MA from 4-7 pm. A private funeral service and burial will be held at the family’s request. In lieu of flowers, memorial contributions may be made in memory of Jim to the Citizen’s Scholarship Foundation of Westfield, directed to the Colleen Shea Memorial Scholarship, P.O. Box 382, Westfield, MA 01086-0382. Firtionadams.com