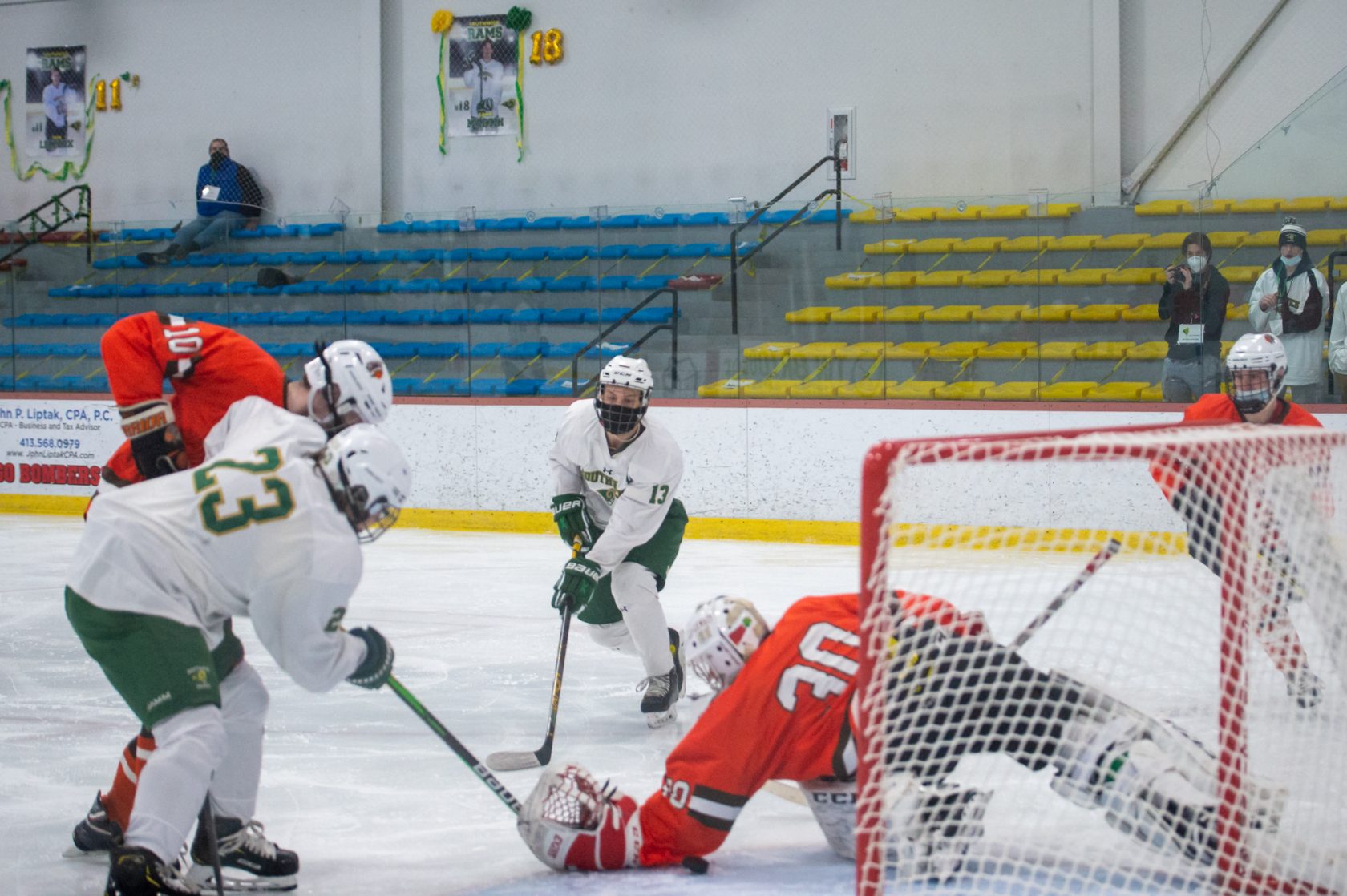 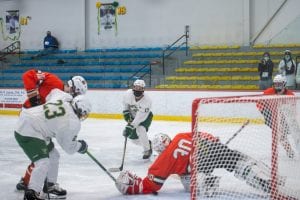 With Southwick behind 1-0 late in the third period, senior Noah Durfey (23) scores the tying goal when he put the puck under the goalie’s catcher. (BILL DEREN PHOTO)

SOUTHWICK – The Agawam High School boys ice hockey team struck gold in overtime of Sunday’s contest with Southwick Regional at Amelia Park. The Brownies, who scored on a breakaway goal in the extra frame to give their team a 2-1 victory – – their first win of the year on the winter sports season’s final day – – stormed the ice in celebration as if they had just won the West Division 3 championship.
Southwick (1-5) nearly won the game late in regulation when the puck rang the post with 12 seconds remaining. The Rams dominated overtime and had a half-dozen scoring opportunities fall just short. The puck hit the post and crossbar, and there were missed tip-ins.
Southwick also had a few faceoffs in the Agawam zone late, but the Brownies goalie came up with one save after another.
“We could not put one home,” Southwick first-year head coach Gary Whittier said. “We got chances but their goalie did a good job.”
Southwick senior Noah Durfey was the team’s lone scorer Sunday. Durfey tapped in the team’s game-tying goal.
Southwick junior Andrew Morris, who has displayed good instincts in net all season, made nearly three dozen saves against Agawam. He has faced 30 shots or more in all but one game this season.
That fact alone is one reason Southwick’s hockey players should pat their collective backs. Despite going 1-5, the Rams made huge strides during a COVID-shortened season and even flashed moments of brilliance, hinting at success in the year’s to come.
“Our future is bright with the core that we have,” coach Whittier said. “We knew we would take some lumps, but it was better to get that experience in a season like this.”
This past season, Southwick went up against an unbeaten Greenfield squad three times and took on perennial powerhouse Longmeadow, playing the Lancers strong for two periods before fading late.
On Sunday, three of Southwick’s top forwards were out due to various reasons. This paved the way for some of the team’s youngest players to showcase their talents. Seventh grader Joey Jubb was positioned out along the blue line every other shift. Eighth grader Kingston Goodman played right wing every 2nd or 3rd shift. Three freshmen – – left winger Evan Grant and defenseman Evan Michelucci, both of Westfield, and center Brady Whittier – – also received significant playing time.
According to the Rams head coach, sophomore Liam McKellick also shows a lot of potential anchoring the defensive line. Freshman Johnny Blase, who oozes boatloads of talent, was out Sunday.
In his first year as head coach, Whittier began instituting his style of hockey.
“I would like to see them go a little bit more north-south and focus on possession … rather than east-west,” coach Whittier explained. “Get the puck into their zone, pinned in and forechecking more in their zone. Slow it down, possess it and make it count.”
Southwick will continue to practice three times a week during the “Fall II” season until April 12 with the outside chance of a few games if any opponents surface, locally.
“We’re just grateful our AD (Athletic Director Dave Sanschagrin) went to bat with the School Committee,” Whittier said.