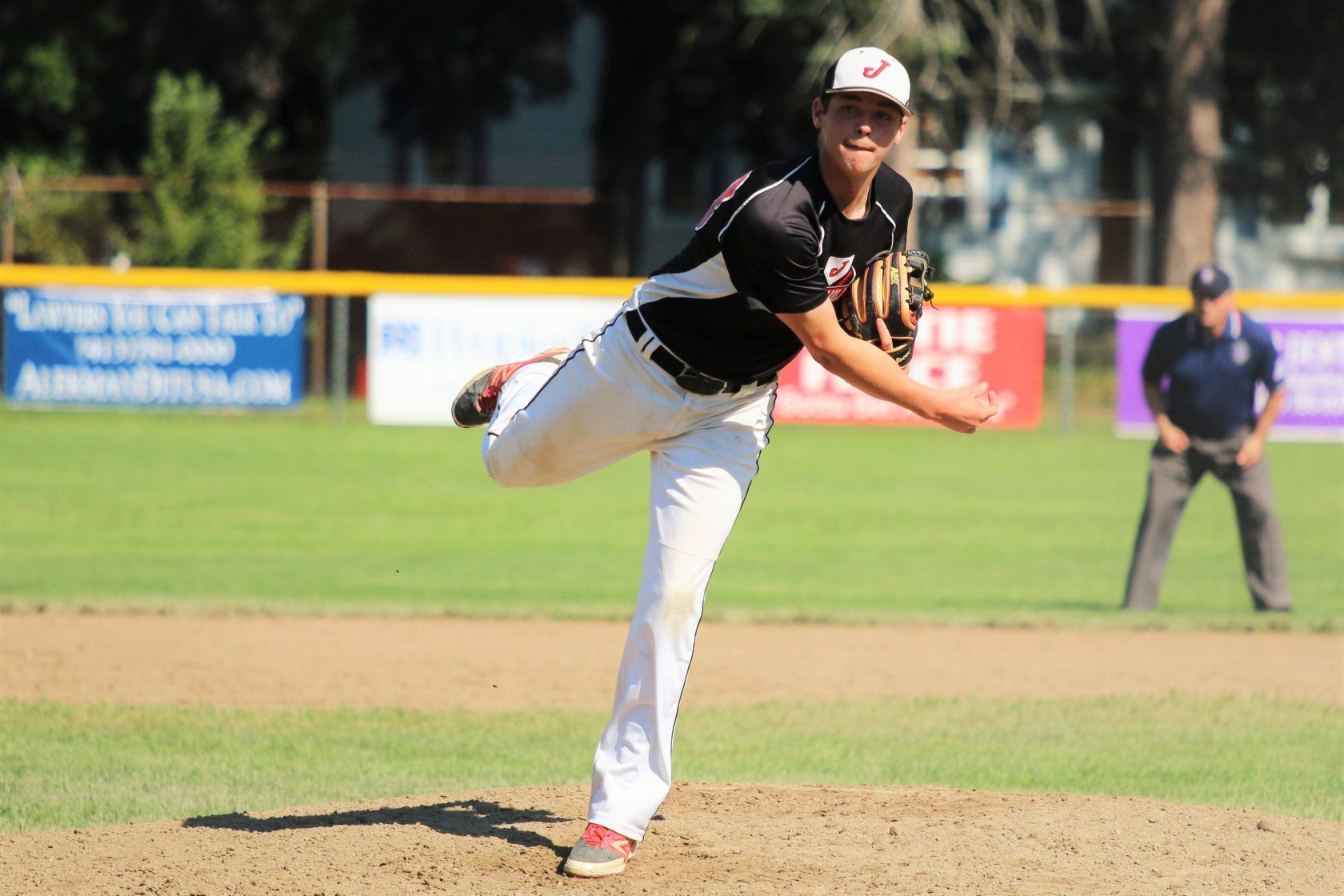 WESTFIELD – The team from the cheese state sure put on a hitting display at Bullens Field early Friday morning. Having the ability to tear the cover off the ball, Janesville (WI), put the mercy rule in effect with a 10-0 victory over West Linn (OR) in the Babe Ruth World Series.
“We had a high percentage of quality at-bats right out of the gate, really happy about that,” said Janesville manager Tom Davey.
A five-run bottom of the first gave Janesville an early jump. Tegan Christiansen started things off when he drilled one off the glove of West Linn pitcher Jacob Sherman and was able to reach first. After Christiansen stole second, Jordan Curtis was able to drop the ball just fair and over the third basemen’s head for a double which allowed Christiansen to score. 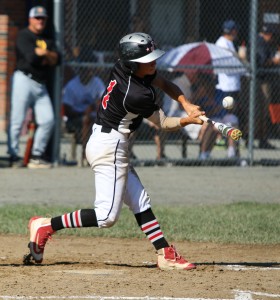 Tegan Christiansen drives a pitch right up the middle. (Photo by Kellie Adam)

Two batters later, Logterman hit a double of his own that drove in a run. Then, with runners on the corners, Connor Clark kept the double party going and scored Clark Schmalin to give Janesville the 3-0 advantage.
In the bottom of the second, after tacking on two more runs, Logterman doubled again to make it 6-0. A shallow blooper to right field from Dawson Draves followed by a single from Dalton Madsen, extended the Janesville lead to 8-0 in the bottom of the third inning.
Throughout the entire game, Janesville was able to hit from all over the field.
“That gives your pitcher a little room to work with,” said manager Davey. “We did put the ball in play quite often.”
Micah Overley certainly did have more than enough room to work with. Overley went the full five innings on the mound for Janesville, working quickly with a pitch count of 55 pitches. 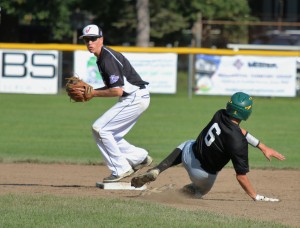 Austin Kliesner looks to turn double play as Oregon’s Will Gabel slides into the second base bag. (Photo by Kellie Adam)

“It just goes all back to our defense,” said Overley. “Just throwing strikes and knowing that our defense is going to pick us up behind me.
Curtis, who received the player of the game honors for Janesville in their opening win yesterday, kept the streak going today. Curtis was responsible for driving in the final run in the bottom of the fifth that ultimately ended the game.
“The final at-bat sums it up for him, a beautiful line drive to right field,” said Davey. “We wanted to get out of there in five (innings), it certainly not always possible, so it was nice to get that hit and score that run.”
After Janesville had to deal with a four-hour rain delay in their game over Mountain Home (AR), it didn’t crack the Janesville team as they had to turn it around early this morning.
“It worked out perfectly for us,” said manager Davey. “I’m very glad we played early, we were very focused.”