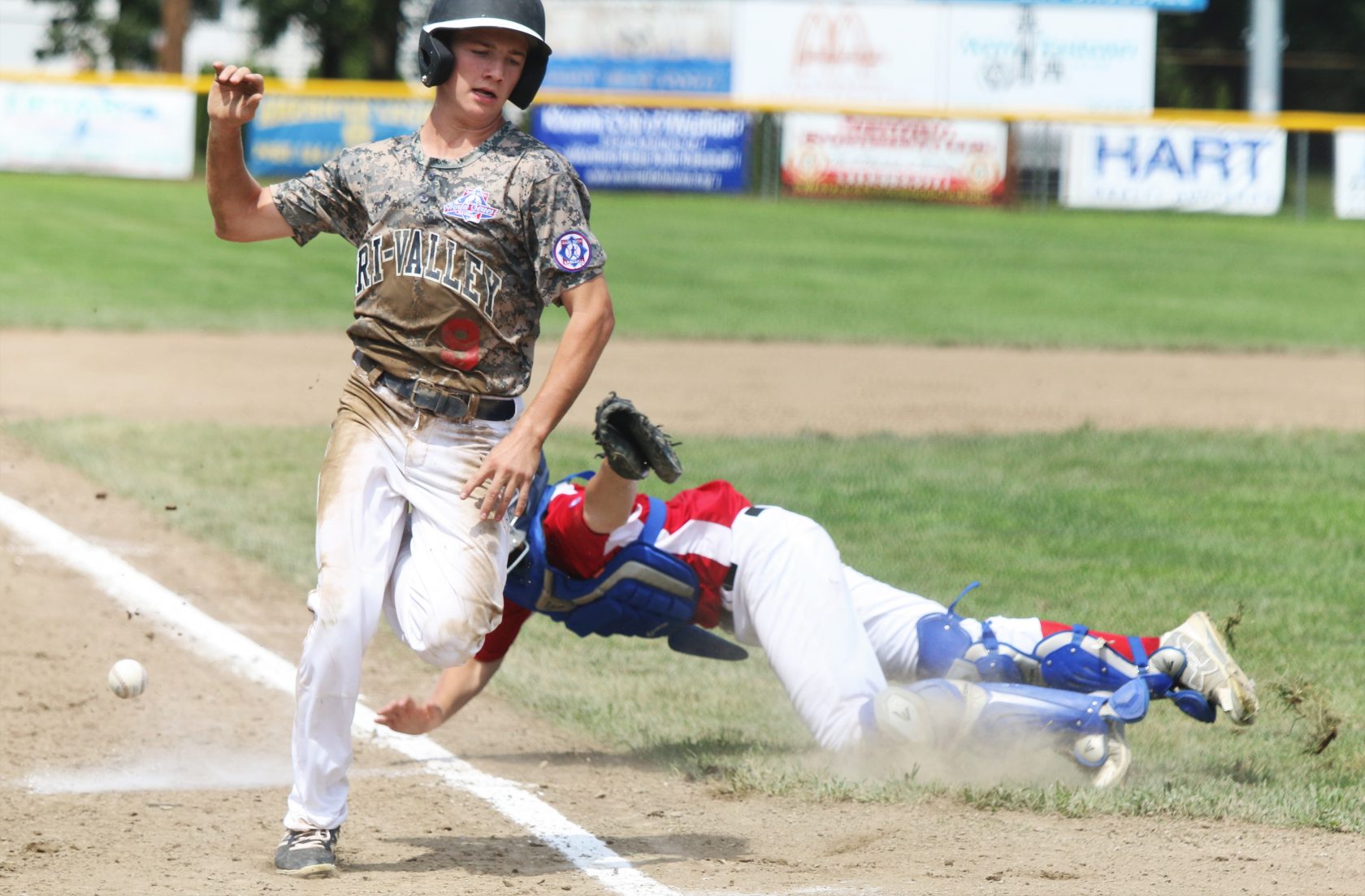 WESTFIELD – The Babe Ruth World Series champs have wasted no time proving that they are indeed on the same path this year. Tri Valley (CA) dominated Tri County (ME) 18-3 in a rematch of the 2015 World Series championship (as 13-year-olds) Friday at Bullens Field in 14-year-old pool play action.
Returning 11 players from last year’s championship team, Tri Valley feels that they have the recipe for success again.
“We built a pretty big friendship and we’re like a family, we’re very close,” said Tri-Valley player Jack Grant. “We need that to win a championship.” 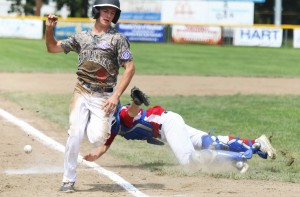 Luke Palfalvi avoids the tag from the Tri County catcher in order to score the run. (ME) Photo by Kellie Adam)

Tri Valley opened up the game in the latter innings as they were able to end this contest in five innings and earn the mercy rule.
The top of the fourth inning proved to be the deciding cause of the mercy. Up entering the top of the fourth with a 9-1 cushion, Tri Valley made their lead just that more comfortable. The team from out west was able to push across nine runs and put the lead at 18-1.
With a 12-1 lead, Michael O’Hara singled, and was followed by another single from Joey Battilega. Battilega finished the game with three hits while Grant had a big three-run double to open up the game even more.
It was the dangerous balance of Tri Valley’s ability to consistently get timely hits and be aggressive on the base paths.
“Everyone’s starting to come through with big hits when guys are in scoring position,” said Grant. “Today we managed to do that.”
While the explosive offense took the headline, Tri Valley’s pitching and defense was just as impressive.
“We’re really a pitching team, a defensive team, with some hitters,” said Tri Valley manager David Grant. “We really look at defense and pitching as our goal.” 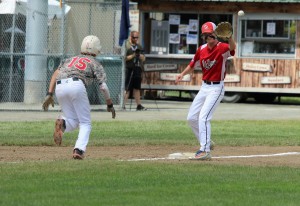 Jack Grant quickly dives back to third base in order to avoid the tag. (Photo by Kellie Adam)

Committing very few errors is another aspect to the defense that Tri Valley takes pride in.
“We probably have on one of the best defenses out here and we don’t make many errors,” said Grant.
On the mound, Tri Valley had their number two guy, Josh Anderson get the nod. Anderson went the first four innings and gave up just one earned run. Demetre Aaron then came in to close out the fifth.
Tri County was able to keep their effort level at the maximum despite the 18-1 deficit entering the bottom of the fifth. Tri County drove in two more runs in that inning before Tri Valley recorded the third and final out.
Tri Valley is in now good position moving forward as they improve to 2-0 in pool play.