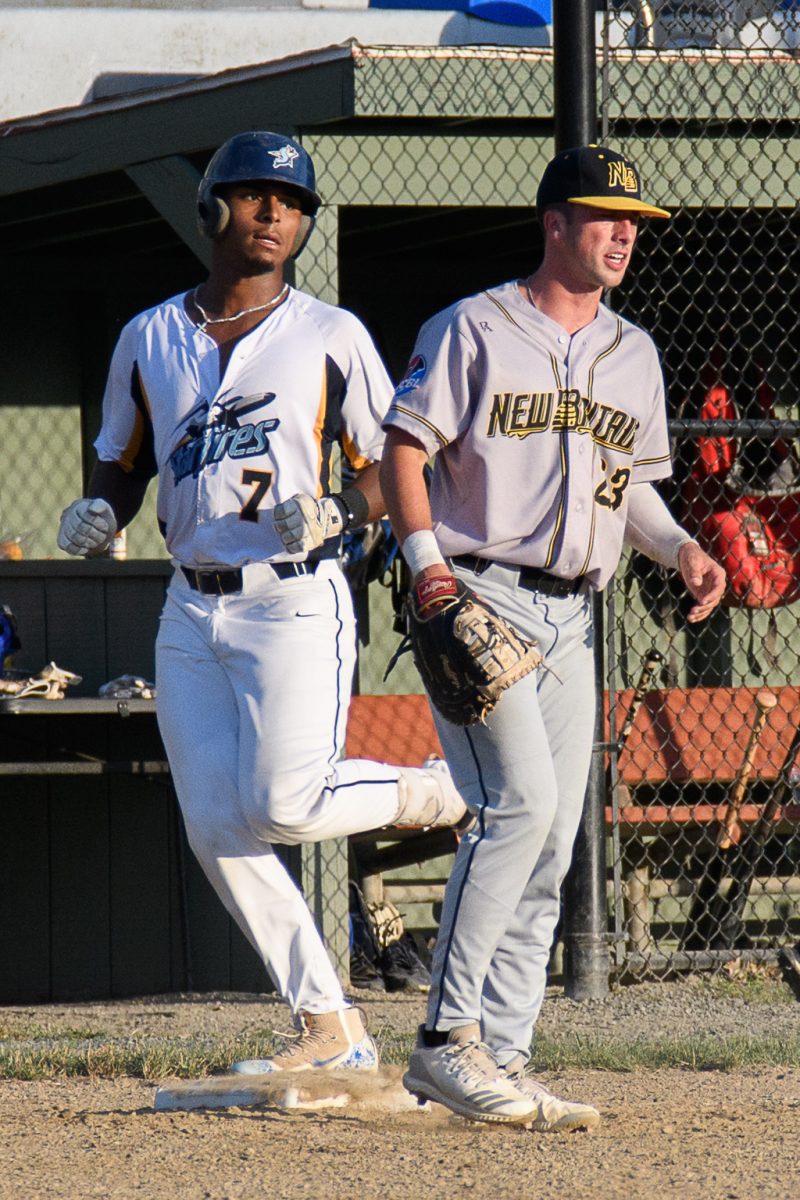 WESTFIELD – The top four batters for the Westfield Starfires went a combined 0-for-14 in Tuesday’s Futures Collegiate Baseball League game against the New Britain Bees, but that did not stop the team’s No. 6 batter, Ramon Jimenez, of Chicopee from changing the tide.
Jimenez blasted a go-ahead, two-run home run to help the Starfires defeat the Bees 3-1 at Bullens Field.
“We have a lot of good guys in our lineup,” Jimenez said. “It’s just a matter of getting our at-bats. Once we are all comfortable and going, we are going to be really hard to beat.”
The going was tough early. 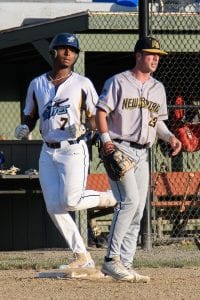 Westfield Starfires’ Ramon Jimenez, of Chicopee makes it to first base against the New Britain Bees Tuesday night at Bullens Field. (MARC ST.ONGE / THE WESTFIELD NEWS)

After retiring the side 1-2-3 in the first – – two by strikeout – – Westfield Starfires starting pitcher Nick Dombkowski (University of Hartford), of West Springfield scuffled a bit in the second inning. New Britain’s cleanup batter Tony Socci (Fairleigh Dickinson) hit a bounding ball over the third base bag that resulted in a double. Socci advanced to second, tagging up on a Derek Tenney (University of Hartford) fly ball and scored on a Mike Caruso (Fairfield University) sac-fly. The Nos. 7 and 8 batters, Kyle Brennan (Endicott College) and Tyshaun Diaz (Southern Connecticut State University) both drew walks before Dombkowski forced a ground out to get out of the inning relatively unscathed.
Westfield easily could have spotted Dombkowski an early lead.
With one out in the first, Mark Coley (University of Rhode Island) walked and Drew DeMartino (University of Hartford), of Pittsfield reached on an infield error before New Britain starting pitcher Drew Mead (Marymount University) got out of the jam by inducing a 4-6-3 double play.
Westfield threatened again in the second when Jimenez and Johnny Tuccillo (Stony Brook University) reached on consecutive one-out singles. Mead was bailed out again as New Britain turned another double play, this time 6-4-3, to end the inning.
Westfield flashed its defensive prowess in the fourth. Starfires catcher, Tuccillo threw out Tenney, who walked to begin the inning. Caruso reached on a dropped third strike. Tuccillo argued that Tenney kicked the ball as he exited the batter’s box and ran down the first base line. Tuccillo was immediately tossed from the game by the home plate umpire. The Starfires remained steadfast, turning their own 4-6-3 double play to end the inning.
The web gems did not stop there.
With Diaz on second base – – he doubled to begin the fifth – – Starfires first baseman Reggie Crawford (UConn) made a spectacular sliding catch in the shallow infield on an attempted bunt from Matthew Bertochi (Central Connecticut State University) and doubled up Diaz at second.
Dombrowski retired four straight batters before exiting after 5 2-3 innings.
Starfires reliever Pat Gallagher (University of Connecticut) kept the Bees off balance, striking out the first batter he faced and retiring the side in the top of the seventh 1-2-3.
After the seventh-inning stretch, Anthony Porrino (Sacred Heart University) drilled a one-out double to right center field. Jimenez followed with a towering home run to right field, turning on an off-speed pitch to give the Starfires their first lead of the game, 2-1.
“I was trying to focus on getting on my pitch,” Jimenez said. “A lot of hitters before me were reaching out, chasing first pitches (throughout the game). I was just trying to simplify my approach and get a pitch I could handle.”
With two outs, an infield error extended the inning, allowing Eric Callahan (Millersville University) to reach. Callahan stole second base. No. 9 batter Danny Crossen (Northeastern University) drove in Callahan with an extra base hit. Crossen was thrown out at third base attempting to extend his hit into a triple.
Westfield again turned to its bullpen, twice over the final two innings to secure the victory. L.T. Pare (Merrimack College) retired the side 1-2-3 in the eighth, two via the K. Pare struck out the first batter in the ninth inning before being lifted for Crawford. Crawford walked the first batter he faced, but retired the next two batters to end the game.
Westfield begins a three-game set against first-place Worcester Brave Hearts, beginning with a home game Wednesday and culminating with road games Thursday and Friday in Worcester. Game time is 6 p.m.