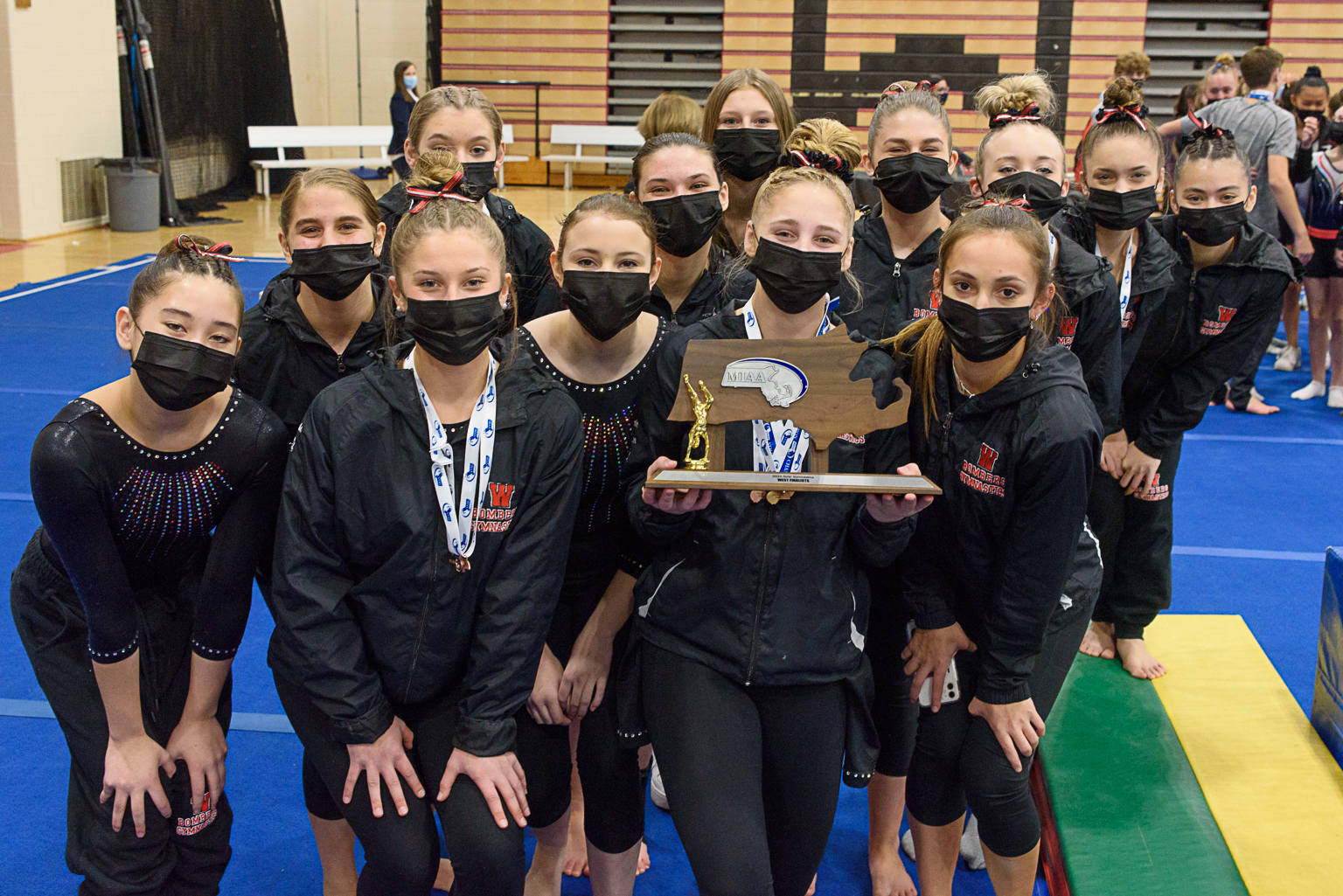 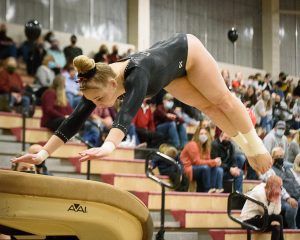 WESTFIELD – Hampshire’s Hailey Raffa and Tyler Hetu were a thorn in the side of the Westfield gymnastics team all season long. The Western Massachusetts gymnastics championships proved to be no different.
Raffa and Hetu finished 1-2 in the all-around portion of the Western Mass gymnastics championship Saturday at Westfield High’s home gymnasium with scores of 35.375 and 34.725, respectively. Westfield gymnast Kaela Johnson finished third (34.4) in front of her home crowd.
The dynamic duo’s dominance propelled Hampshire to the team title with a team score of 135.775. The Red Raiders unseated three-time defending champ Minnechaug (3rd place, 130.55). Westfield finished runners-up with a score of 133.725. Agawam and Chicopee Comprehensive rounded out the top five.
It was Hampshire’s first gymnastics title in nearly 30 years and second in four decades.
“Hailey and Tyler have really big skills that are a little bit different than the other gymnasts competing, and they perform well,” Westfield High School gymnastics coach Christina Pagella said. “Hampshire also had some depth. If your other gymnasts hit their routines, you secure your spot at the top.”
It was not all Hampshire though.
Johnson was magnificent for Westfield, finishing first on the balance beam with a 9.1. Her floor routine also garnered a 9.1, good for third.
“Every year I put in the work, day-in and day-out,” Johnson said. I put in that effort 110 percent. It was nice to see it pay off consistently.”
Johnson earned the praise of her head coach.
“She had an excellent meet,” coach Pagella said, regarding her top all-around gymnast, Johnson. “There is nothing in my eyes Kaela could have done better. She went out there and hit all of her routines and had fun doing it.”
So what is it that makes this senior gymnast tick? 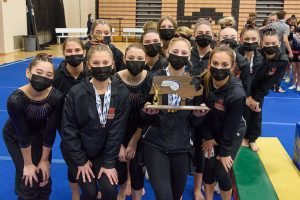 “Kaela is an extremely hard worker inside and outside of the gym,” coach Pagella said. “She will do her routines until she gets it right. …Her work ethic and dedication puts her in a position to do well.”
Johnson led a strong team of Westfield gymnasts on the balance beam, which also included Isabella Goodreau (5th, 8.45), Elizabeth Galczysnki (6th, 8.375), Emery James, Sierra Borges, and Brooklyn Borges. The Bombers went a perfect six-for-six on the beam without a single fall.
“That was such a huge achievement,” coach Pagella said.
Goodreau went on to win bronze on the bars with an 8.4. She placed sixth in the all-around competition with a total score of 33.4.
Galczynski, who showed marked improvement all season long, according to her head coach, expanding her repertoire from just one or two events a year ago to now include nearly the full scale of events, was sixth on the floor (8.75).
James and Jocelyn Yarasavych (Westfield) placed fifth and sixth, respectively, on the vault with scores of 8.4 and 8.375.
All in all, it was a positive experience for Westfield, especially considering the Bombers were shorthanded, competing without two key gymnasts, who could have provided considerable depth. Both were out with injuries.
That combined with Hampshire’s double feature of star gymnasts and Minnechaug’s recent run of dominance at the championships, made things quite the challenge this season.
“We were kind of in an uphill battle,” Pagella said, but I’d have to say our entire team stepped up. We hit our routines.”
NOTES: The MIAA also presented Hampshire with the team sportsmanship award Saturday. …Chicopee Comp’s Elizabeth Santos was named the Senior Gymnast of the Year.