WESTFIELD – One of the city’s youth sports organizations just hit a home run.
Westfield Little League officially named Scott LaBombard its league president at a special meeting held recently. Barring any opposition it is likely that LaBombard will retain that title following another nomination period next month.
“I’m excited and nervous,” said LaBombard, who has been involved with Little League and other city youth baseball organizations as a board member, volunteer, umpire, coach and parent. He also served as vice president for Babe Ruth and was one of several local volunteers who worked diligently to make this past summer’s World Series a success.
“Little League is not only a place that kids can go to to play baseball,” LaBombard said, “but when those kids get older, they’re going to remember not the games they played but the friends they made, the funny stories, and the celebrations after. There’s no better place to do that than locally in our league.”
LaBombard fills a position that remained vacant for nearly a year after Ken Diegel stepped away following a brief stint as league president, a position that once belonged to John Wheeler for what seemed a lifetime. Wheeler passed away in April 2018. 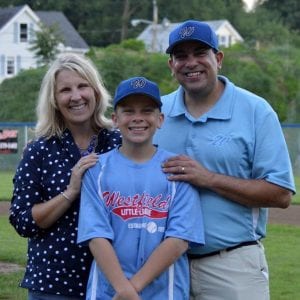 Westfield Little League has undergone several changes in its recent past, eliminating the “North” and “South” labels for the trendier “American” and “National” tags like Major League baseball. A downward trend in participation locally forced the Whip City’s league to open up participation to Southwick residents. A sharp decline in numbers forced the city’s two sides to merge into one this past season, fielding just one All-Star team for the first time in recent memory.
On the flip side, in theory at least, Westfield will now have the opportunity to forge a stronger squad for All-Star tournament season. Several coaches and parents within the local baseball community anticipate that the 2020 Little League 12-Year-Old team will be one of the strongest the city has seen in some time.
Still, that depends on many factors like the continued good health of those individual players, team chemistry, and luck.
“They could be a pretty special group,” LaBombard said. “(Westfield Little League 12-Year-Old All-Stars manager) Mike Raposo’s vision has always been to go to the World Series or at least Bristol (Conn.) … but honestly, that’s probably the furthest thing from my mind.”
The top priority for LaBombard, which also echoes Raposo’s sentiments, is to provide area kids with the equal opportunity to play, learn what it really means to be a good teammate, and have fun. If it happens that Westfield advances deep into next year’s tournament, LaBombard said “that would be great for the community.”
“That’s what’s most attractive to me,” he added. “Maybe that’ll bring more kids to our game.”
It is no surprise that travel leagues and summer lacrosse have made a big dent in youth baseball, locally.
“Baseball is struggling in Westfield,” LaBombard said. “We’re up against the wall.”
LaBombard said he will look for input from fellow board members to overcome the hurdles and challenges facing Westfield Little League.
Said LaBombard: “We need to make the game more action-packed.”
Westfield Little League has also been heavily involved in maintaining its relevance when it comes to softball as well. The league remains committed to making opportunities and conditions favorable for softball players of all ages, according to LaBombard.
AWARDS NIGHT: WLL held an awards night ceremony this past week. Regular season champions Vivid Hair Salon (14U Softball), Meyers Brothers Kalicka (12U Softball), Slovak Club (Majors Baseball), and Teddy Bear Pools and Spas (Wheeler Baseball) were honored. The All-Star District 2 champions (12U Softball, 10U Softball, 8-10 Baseball, 7-9 Baseball) were also recognized. …Individual awards were presented to Josh Drumm and Camille Bruno for the John Wheeler Sportsmanship Award; Rachel Bonfitto, Ciara Toporowski, and Nick Gauger for the Ken and Dulce Diegel Award; and Jeff Cichonski for the Ralph E. Sanville Memorial Award.