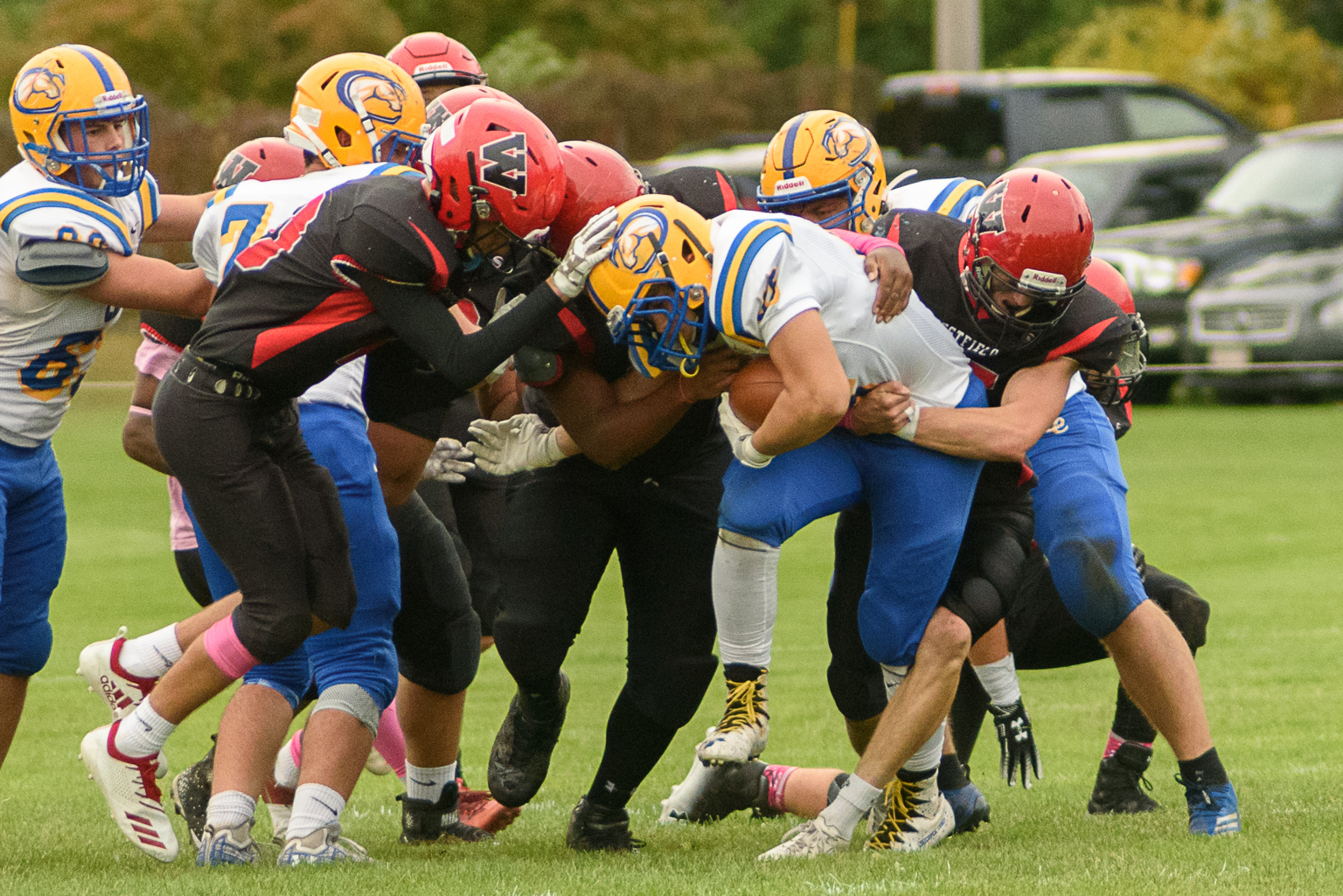 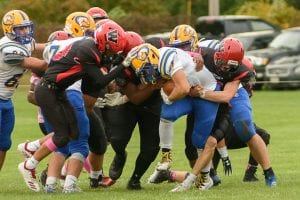 WESTFIELD – The Westfield High School football team took two steps forward with consecutive wins against East Longmeadow and Agawam. On Friday, the Bombers took one step back.
Chicopee Comp senior quarterback Nathaniel Lepage executed his team’s hurry-up offense to perfection, throwing for four touchdowns in downing Westfield 35-14 Friday night at Bullens Field.
Chicopee Comp (2-3) struck with surprising deftness, blindsiding Westfield (3-2) with three first quarter touchdowns. After stalling out on their first drive, the Colts scored on five straight possessions.
On their second drive of the game, Chicopee Comp drove 55 yards in four plays. The Colts scored their first touchdown when Lepage connected with senior wide receiver Travis Kagan on a 14-yard pass with 5:53 remaining in the first quarter.
Two plays into Westfield’s drive, the Bombers fumbled the ball away.
Chicopee took over on the Westfield 16-yard line and immediately took advantage, scoring on a 16-yard touchdown pass to senior running back Isaias Gomez. The score came with 4:36 left in the quarter and resulted in a 14-0 Colts lead.
Westfield charmed their way to a touchdown on their third series. Needing just two plays, Bombers senior running back Nick Clauson rushed for 33 yards, and sophomore quarterback Matt Adamites followed that up with a 32-yard scoring strike to junior wide out William Brewster with 4:08 on the first quarter clock.
Chicopee Comp responded with another touchdown, driving 80 yards in less than two minutes on their ensuing drive. The Colts scored on an 11-yard TD pass from Lepage to Kyle Jones.
The second quarter featured much of the same.
Westfield turned the ball over early in the second quarter when Gomez intercepted the ball near midfield.
Once again, Chicopee Comp took advantage of the turnover. The Colts soon scored on a 2-yard TD run from Gomez with 7:54 remaining in the second quarter.
Westfield moved the ball some on their next possession, but stalled out on the Chicopee Comp 15-yard line.
Chicopee Comp continued its assault. The Colts drove 85 yards in 2 minutes, 42 seconds and capped it all off with a 20-yard touchdown pass from Lepage to Jones. The score was 35-7.
Westfield nearly came away with a score late in the first half, but the drive ended just a few yards away from the goal line when time ran out.
Westfield came out with a renewed purpose in the second half. The Bombers put together a 14-play drive that chewed up 67 yards, ate up nearly five minutes of clock, and culminated in a 1-yard plunge by Clausen.
Chicopee Comp countered with a drive deep into Westfield territory. The Bombers escaped unscathed though as C.J. Flores-Skribiski stepped in front of a Lepage pass and returned the interception 90 yards for a touchdown. It was now 35-21.
The two teams exchanged possession of the ball twice in the fourth quarter, and the score remained unchanged until the final seconds ticked off the game clock.

Westfield 3, Easthampton 1
Westfield experimented with Jack Fortier up top and it paid off handsomely. Fortier drew a penalty 11 minutes in, and buried it. Ten minutes later, Mike Grochowski took a loose ball at the top of the box and buried it for a nice goal. Seven minutes after that, Shea Drugan scored off an assist from Zack Edelseon.
“(Things) just really clicked for us today,” Westfield boys soccer head coach Andrew Joseph said. “They couldn’t deal with the speed and movement from our front three. Our backs and central midfielders were very thorough and won their 1-v-1 battles.”
Westfield improved to 3-6-4. The Bombers have four games remaining, all league matchups, beginning with East Longmeadow on the road Tuesday at 4 p.m.
“We’re treating every game like it’s the postseason the rest of the way,” coach Joseph said.

Southwick 12.5, Minnechaug 11.5
Southwick’s Matthew Garrity and Minnechaug’s Peter Wurszt finished deadlocked in a tie at Edgewood Golf Course. Each golfer shot a 37 to lead the field.