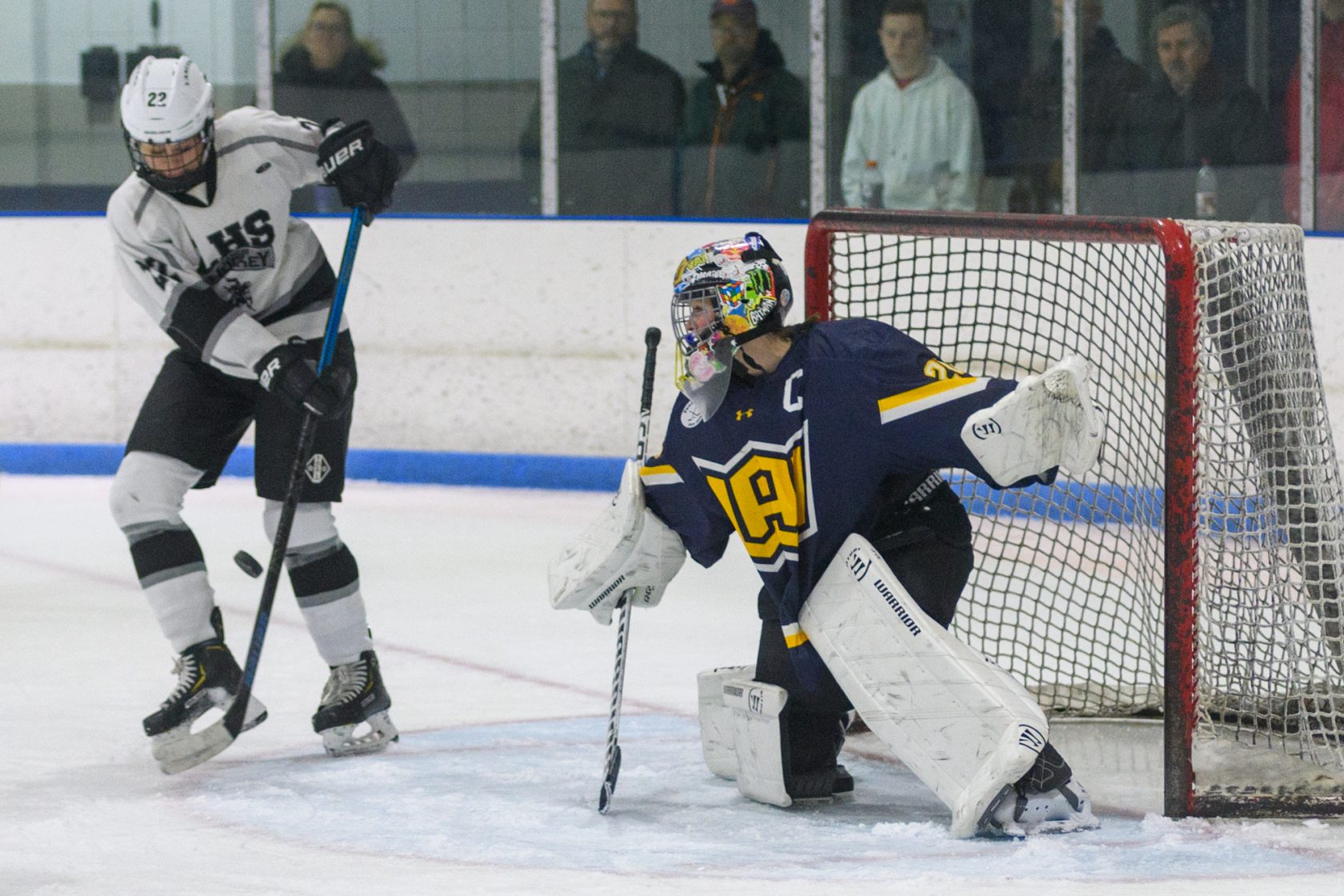 HOLYOKE – The Longmeadow-Westfield girls ice hockey team put an exclamation point on the end of their 2019-20 season, wrapping up the regular season with a resounding 8-0 win over Woodstock Academy Thursday at Fitzpatrick Arena.
Longmeadow (8-8-4) scored early and often, tallying four goals in the first period, and three more in the second period before tacking on an insurance goal in the final frame.
“We had a long conversation in the locker room after the game Saturday,” Longmeadow girls ice hockey head coach Melissa Vandermyn said, referring to a 5-1 loss to Algonquin, the team’s fourth straight defeat. “The girls decided they were going to change that mentality for Monday’s game and they did, and we had a really great comeback win.”
On Monday, Longmeadow rallied to nip Dedham, 3-2.
“I think just carrying that (positive vibe) into this game was the idea – the positive attitude, nobody’s perfect, we’re all working towards a goal, we all have a part, and everybody plays some sort of role, some sort of part, whatever that is to recognize it and be part of the positive shift to make sure that we’re playing our best hockey because we’ve proven we can compete with the best teams,” coach Vandermyn said. 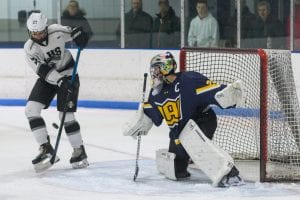 Longmeadow-Westfield’s Alyssa Warren tips the shot from the point on goal Thursday against Woodstock Academy at Fitzpatrick Arena in Holyoke. (BILL DEREN PHOTO)

The game against Woodstock (5-14) was over in the blink of an eye.
Longmeadow came out firing as Lexi Pfalzgraf skated up the ice following the face-off, and scored nine seconds into the game. Pfalzgraf went on to finish with two goals and one assist.
Madison Fox also scored twice while Jane O’Connor, Ashley Barron, Madison Manser, and Abby Hartley each netted a goal. Jordan Kowalski earned three assists, Anna Chrisanthopolous and Barron had two apiece. O’Connor, Jillian Croteau and Pfalzgraf each had one.
Longmeadow goalies Mackenzie Rae and Madison Gallant combined for a shutout in net. Gallant came on in relief of Rae to begin the second period and finished with five saves. The Lancers defense did not allow a shot on net in the first period.
“We needed a big mood swing,” coach Vandermyn said. “This game (had) to be no bad habits, positive attitudes, making sure that we’re doing the right things, we’re playing the systems, we’re communicating, and everybody is just staying positive and getting adrenaline, and making sure that we’re firing on all cylinders and playing (our) best.”
On Friday, the state Division 1 tournament seeds were unveiled. Longmeadow drew the 20th seed in the 32-team field. The Lancers will travel out east Wednesday night to play No. 13 Methuen-Tewksbury (10-4-6) in a preliminary round game at Methuen High School. The puck drops at 7 p.m.
“We obviously know that our record isn’t great,” coach Vandermyn said. “We know we’re not hosting so we’re going to play someone seeded higher than us. My hope … is just making sure that (our players) are confident the ranking doesn’t matter. We’re just coming to play a game. We’re coming to play another team, and it’s like any day of the season.”

Wed., Feb. 19
GIRLS BASKETBALL
Bombers avenge loss with ‘Senior’ moment
Westfield 44, Minnechaug 33
In their prior meeting, Minnechaug marred Westfield’s “Senior Night” and senior guard Olivia Hadla’s 1,000 point celebration by knocking back the Bombers, 57-36. The Whip City avenged that loss in the season finale.
On Wednesday, Westfield outscored Minnechaug 18-0 in the first quarter en route to a 44-33 victory, spoiling the Falcons’ “Senior Night” in Wilbraham.
“We kind of know how ‘Senior Nights’ go,” Westfield girls basketball head coach Dylan Willey said. “It’s a lot of emotion and a lot of things that are outside of basketball that go on during those games. We wanted to get off to a hot start, and we did.”
“I’ve been on my team about trying to get a quarter of zero points for the other team all year,” he added.
Westfield (11-9 overall, 3-5 Valley Wheel) came close a couple of times during the regular season. The Bombers held Chicopee Comp to two points in the fourth quarter of a 53-34 victory on Jan. 21 and outscored Mount Greylock 35-5 in the second and third quarters combined in a Jan. 8 blowout. They also limited Northampton and Monument Mountain to just two points during one quarter of action in a couple of early season contests.
“We finally got that goose egg in the other teams column,” coach Willey said. “We were sharing the ball – all five starters scored. It started with rebounding, holding them to one opportunity, forcing them into tough shots, and making the extra pass.”
Westfield seniors Kaela Mochak (15 points) and Sam Kaubris (2) kept Minnechaug (15-3, 7-1) off the boards in the first half. Bombers’ junior Chandler Pedolzky scored 14 points. Junior Emma Pedolzky and Hadla finished with seven and six points, respectively.
Freshmen Claire Griffith and Morgan Fillion, and juniors Saige Smith and Ali Piper provided key minutes off the bench for Westfield.
“Overall, it was a really good team effort,” coach Willey said. “It’s what we’ve been building upon. I really like how the team were each other’s biggest fans. The energy was really good. We had a lot of positive interactions.”
Minnechaug attempted to rally, but Westfield held strong. The Falcons closed out the game by outscoring the Bombes 17-12, but it was not enough.
“Minnechaug is great,” Willey said. “I credit them for fighting and clawing back, but every time that they made a run we found a way to make big plays in big moments.”
Westfield now awaits the unveiling of the tournament field Saturday.
“We’re looking forward to the playoffs,” Willey said. “That’s what we need to continue to build on, making those big plays whether it’s a loose ball or taking a charge or getting that big rebound to stop that run. That’s the thing that this team has to do and we’re getting there.”