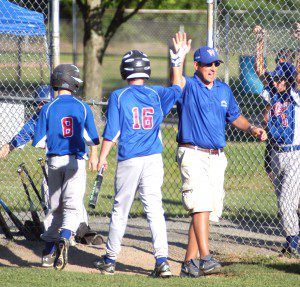 WESTFIELD – When it comes to the Whip City, there is never too much baseball.
Local Little Leaguers donned gloves and caps, and laced up the cleats in the spring. This past summer, the “best of the best” represented the city during All-Stars play. This fall, nearly a hundred 9-11-year-olds will now get the opportunity to extend their sport’s season two months longer.
Westfield Little League is set to introduce its inaugural season of fall ball, bringing together the city’s north and south sides together for the first time.
“The season ends in June for a lot of these players, and All-Stars play up through July,” said Westfield Little League South Vice President Mike Raposo, who helped spearhead the campaign to initiate fall ball. “Then they put down their bats and gloves until spring. This will give kids the opportunity to play basically throughout the year.”
The Westfield Little League Baseball fall ball season will be played on Saturdays and Sundays, beginning September 7 and ending in late October. If the high level of interest displayed by the number of recent sign-ups is any indication, the extended season figures to be a success.
“We anticipated three to four teams,” Raposo said. As of Tuesday night, 75 players had signed up for the fall season. “Things are going really well. We’re really happy.”
Each roster will contain 13 players, a mix from both the north and south.
“The larger rosters were agreed upon so we can accommodate football, soccer, and hockey players who want to come in for one game on the weekend,” Raposo said.
The lineup will feature rotational batting. Every player will bat.
One practice a week is planned, and games will be played at Ralph E. Sanville Memorial Field on Cross Street and Kiwanis Field at Papermill Playground. Westfield teams will be placed in a league, also consisting of squads from Agawam, Easthampton, Northampton, Amherst, Gateway, and Belchertown, home to mini-Fenway.
Raposo noted that the Little Leaguers’ fall ball program has been modeled after Westfield Babe Ruth’s fall baseball league, which has been running strong for more than 10 years.
“This shows that baseball is still going strong in Westfield, that Westfield is still a baseball town,” said Raposo.
Little League softball’s participation numbers have been on the decline over the last couple years – evident in the weakened state of the All-Star teams this past summer. Some believe that may have been due to defections to travel leagues, as well as the rise of lacrosse. But Westfield will also field softball teams this fall.
“(Fall baseball) is not just good for Westfield, but good for surrounding teams to keep kids playing baseball year round,” said Raposo. “There will be no standings. We will not be focused on wins and losses … It will be about player development. Every kid will bat, one through 13. We will try to get as many kids pitching as possible, and we will split playing time.”
The fall ball league will be accepting late registrations through Friday, August 9. Anyone still interested in joining can email Mike Raposo at [email protected]@gmail.com.