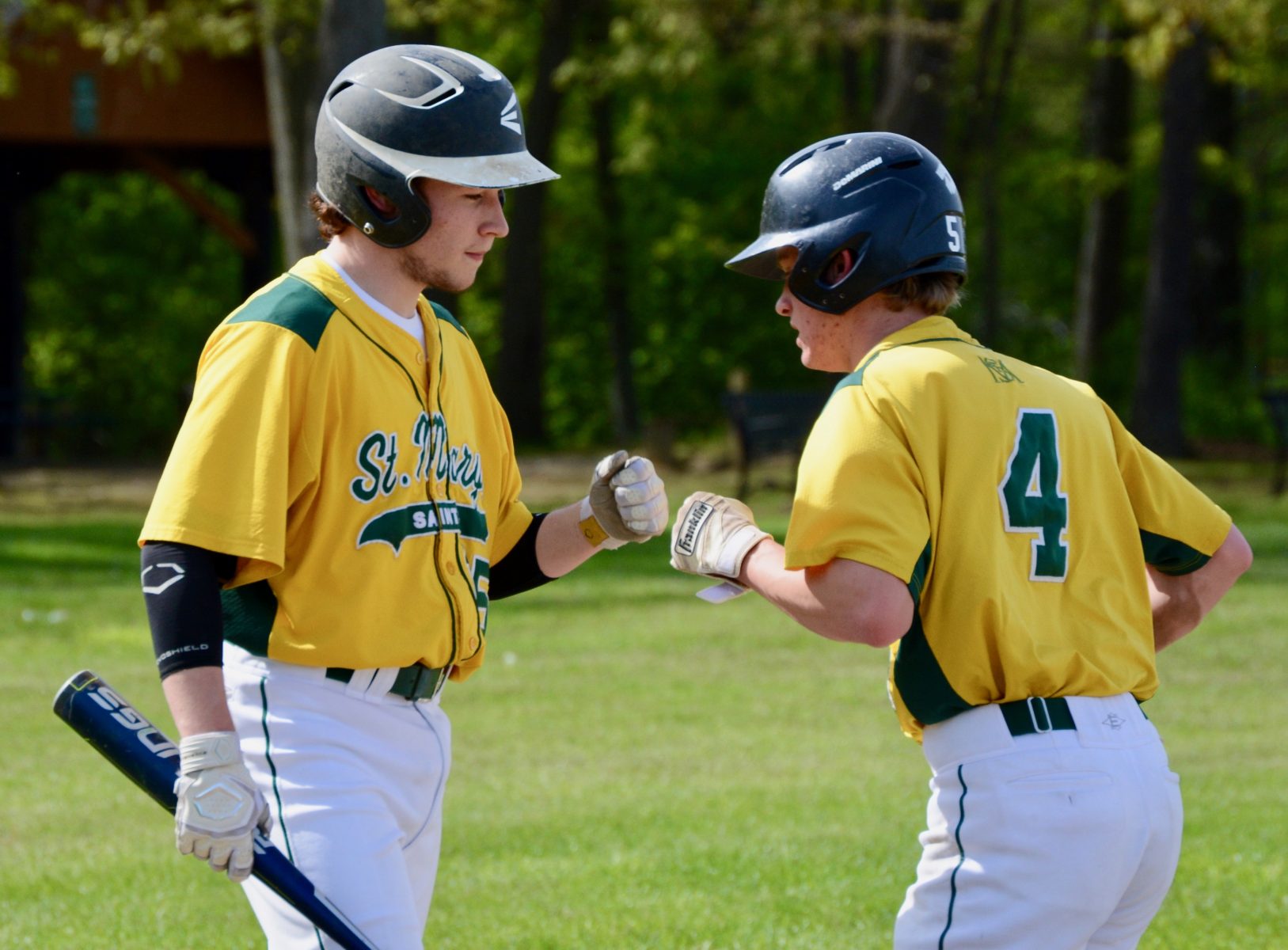 SPRINGFIELD – There was one thing shining even more brightly than the warm, spring sun Tuesday – the St. Mary High School baseball team.
St. Mary scorched Putnam 18-1 Tuesday in a mercy-shortened contest at Blount Park in Springfield. The Saints exploded for 13 runs over the third and fourth innings en route to the convincing victory.
St. Mary’s batters Nate Bonini (4-for-4, run, RBI), Quinn Powers (3-for-5, 2 runs, 2 RBIs), and John Daley (2-for-3, 2 runs, 2 RBIs) all enjoyed multi-hit outings. 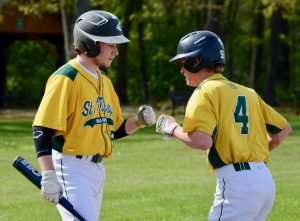 Clegg, Tigers win again
Westfield Technical Academy 9, Smith Vocational 2
Nick Clegg delivered another ace-worthy performance, going the distance in a 13-strikeout effort.
Clegg also went 2-for-3 and scored three runs at the plate.
Alex Sparks and Chris Boyden each drove in two runs, and Andy Daniels and Cody Garwacki each had an RBI.
Westfield Tech improved to 7-7 and now must win two of its final three games to earn a postseason berth.

Bombers win thriller
Westfield 2, Amherst 1
Mason St. Pierre won a pitcher’s duel against Amherst’s Trevor Edwards to lead Westfield to a pulse-pounding victory at Bullens Field.
Pierre allowed just four hits and one run over seven complete innings. He struck out nine batters and walked two.
Westfield scored its only runs of the game in the bottom of the first inning.
Aidan Dunn got things started with a lead-off walk, and a stolen base. Sean Moorhouse followed with a one-out walk. J.D. Huntley advanced the runners with a soft ground out at second base. Anthony Clark and Sefan Krol hit RBI singles.
The two runs would prove to be the difference as Amherst could only muster one run in the second inning.

Indians blank Rams
Ware 13, Southwick-Tolland 0
Jake Crevier threw a one-hit shutout, recording 13 strikeouts on the mound for Ware. Southwick’s Richie Almbertie broke up the no-hitter with the team’s only hit.
Southwick (6-9 overall, 2-4 Bi-County South) must now win four of its final five games or upset Palmer (10-5 overall, 4-2 Bi-County South) for second place in the league to earn a spot in the tournament.

SOFTBALL
Moniz, Bombers shut out Brownies
Westfield 6, Agawam 0
Haley Moniz (11 Ks, 1 walk) tossed a three-hit shutout and homered to lead Westfield to victory. Brit Kowalski also had a home run for the Bombers.
Both players finished with two RBIs apiece.
Westfield’s Sam Schieppe had an RBI double, and Nicole Clemente had two hits and scored three runs.
“This was a game we really wanted,” said Westfield coach Tim Desmond, who’s team lost to Agawam in the first meeting of the season, despite leading by four runs in the seventh inning. “We let that loss kind of bother us. We knew we had another chance at them and we knew they are a tough team to beat.”
Westfield’s defense was outstanding behind Moniz.
Casey Almeida made a great over-the-shoulder catch to prevent Agawam from getting anything going.
“We have worked so hard the past few weeks and to play a clean game today against a top team was nice to see,” coach Desmond said. “Haley had great rhythm today and was making pitch after pitch.”
It was Moniz’s third straight shutout victory.
Westfield will be seeking its 10th win of the season, and the tournament berth that comes with it when the Bombers travel to Amherst to take on the Hurricanes Thursday night at 6:30.

Rams bounce back
Southwick-Tolland 5, Smith Academy 3
Britt Penland (2 runs, RBI), Emily Lachtara (2 RBIs), and McKenna Leary (run) each had two hits to lift Southwick, which was coming off a 7-1 loss to Northampton on Monday.

GIRLS’ LACROSSE
Brownies top Bombers
Agawam 16, Westfield 8
Agawam used a dominant first half, building a 10-3 at the half to get past visiting Westfield.
Katy Girard (2 goals) and Olivia Hadla (1 goal, 2 assists) led Westfield.

BOYS’ TENNIS
Terriers shut out Saints
West Springfield 5, St. Mary 0
St. Mary’s Dom Nomakeo and Jared Rusin both avoided being shut out, at second and third singles, respectively, with one point apiece in each set of a two-set loss.