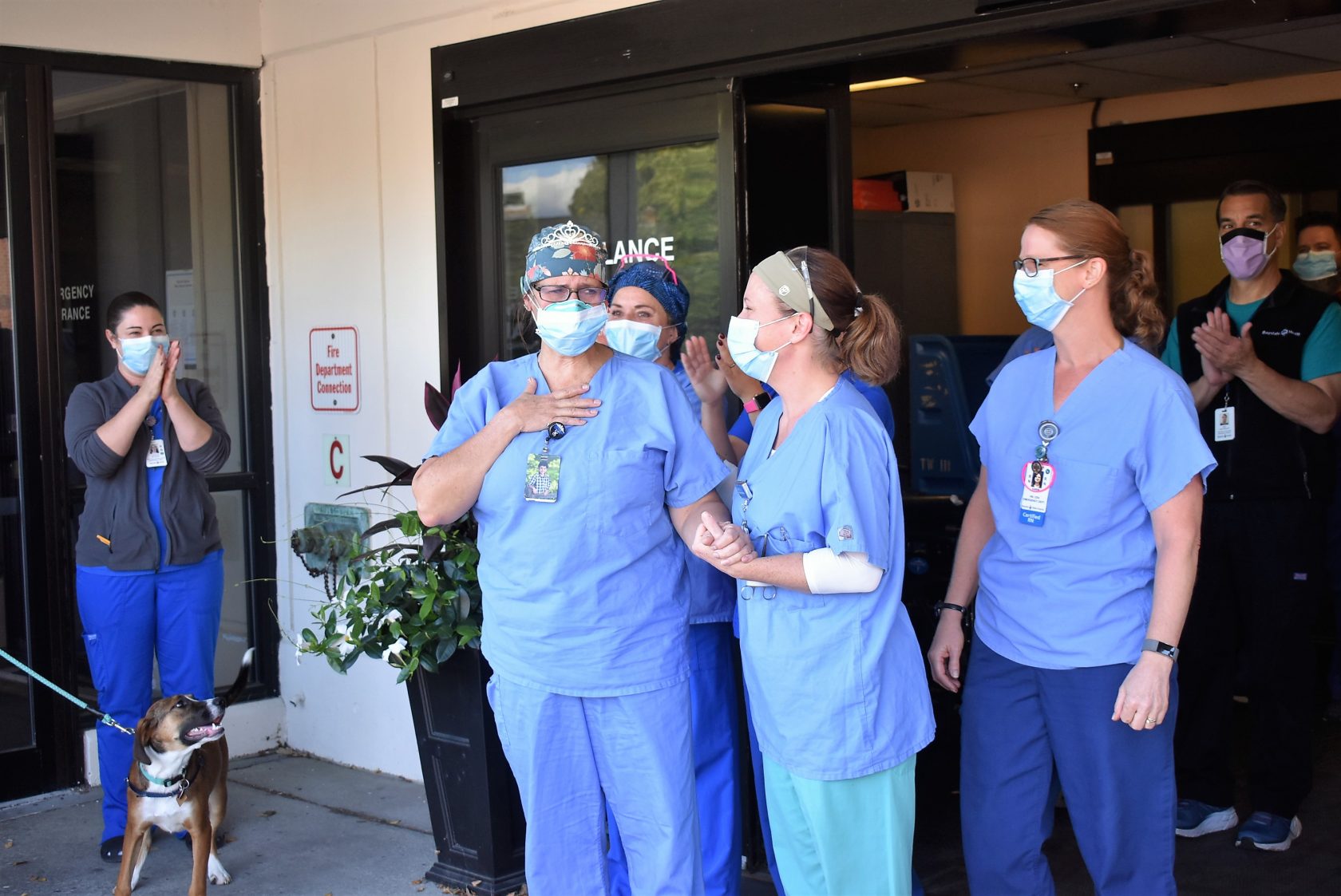 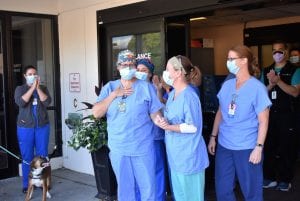 Juanita Carnes, center, expresses her surprise Sept. 30, 2020 as her co-workers at Baystate Noble Hospital applaud her as she leaves the emergency room for the on her last day after 34 years at the hospital. (HOPE E. TREMBLAY/THE WESTFIELD NEWS)

WESTFIELD – Juanita Carnes spent the last day of her 34 years working at Baystate Noble Hospital doing what she does best – taking care of people.

Little did Carnes know that there were a few dozen people waiting outside the emergency department entrance Sept. 30 to applaud her on her last day at the hospital.

The folks gathered waited patiently for Carnes, who took her time to make sure her last patients were discharged before ending the last of many shifts there.

Carnes, RN, has been a nurse practitioner at the hospital for over three decades. She was employed by Westfield Emergency Physicians and worked in the emergency department. Carnes said when the Physicians’ contract was not renewed, she was out of a job, but not for long because Carnes will begin her new position at Cooley Dickinson Hospital’s Southampton urgent care next month.

Carnes said she was not expecting all the fanfare at the close of her last shift and burst into tears as everyone applauded, held signs wishing her luck and thanking her, and showering her with many bouquets of flowers.

“It was bittersweet,” she said of the reception and leaving the hospital. “Noble Hospital has become my home.”

Carnes said she started as a registered nurse on a medical floor in 1986 and almost left after that first year.

“I was ready to quit nursing because I felt like I was racing the clock,” she said, “then someone suggested I should look into going to the emergency department. I did and have been there ever since.”

In 2001 she became a nurse practitioner and continued to care for emergency room patients in that capacity, working for Westfield Emergency Physicians. She said moving to the emergency department was the best career decision she made.

“Working in the ED gives us the opportunity to control chaos,” she said. “One never knows what is coming through those doors next. We see very minor injuries and illnesses to cardiac arrests. Everything in between is so varied and sometimes bizarre.

“We work as a team with our collective intelligence, experience, knowledge and gut to help people. We deal with such extreme sadness and sometimes a volatile workplace. The bond we form working in this environment is unbreakable. I am honored and grateful to have worked with great, dedicated and amazing people for so many years.”

“She is the most caring, thoughtful person I’ve ever met in my life,” said Joanne Ghazillo, who has worked with Carnes for 29 years. “She is smart and kind.”

“She is the person who always gets someone a birthday card or sympathy card or brings in a dish to share – and she is a great cook,” Ghazillo said. “She thinks about everyone. I will miss her – I have been crying the past three days.”

Carnes also serves Westfield as its Board of Health chairperson and was an instrumental part of the city’s COVID-19 response team. Carnes said in the early days of the outbreak, she was frightened and still is in some ways, particularly because she has a heart condition.

Carnes said while leaving Baystate Noble was not her choice, she looks forward to a new adventure.

“I spent my entire career at Noble,” she said, “it’s my home. But I am excited for this new chapter.”

Carnes said she will miss the patients, many of whom she got to know well over the years, but mostly she will miss her emergency room family.

“I am so appreciative of my co-workers,” she said. “Their outpouring of love touched my heart deeply.”