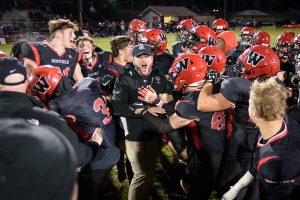 Westfield football head coach Rob Parent, center, celebrates with Bombers players after defeating Fitchburg in the opening round of the Division 3 state tournament. The Bombers will collide with the top-seeded, undefeated Marblehead Magicians in the semifinals Saturday at Shrewsbury High School. Kickoff is 3 p.m. (THE WESTFIELD NEWS FILE PHOTO)

WESTFIELD – When it comes to the upcoming Division 3 football state semifinal matchup between the top-seeded, undefeated Marblehead Magicians (9-0) and nearly unbeaten fifth-seeded Westfield Bombers (8-1), the numbers are eye-popping.
Westfield has beaten its opponents by a combined score of 235-46, including three regular season shutouts (Amherst, Northampton, Minnechaug). If you take away a 20-6 loss to Division 1 semifinalist Central, the Bombers have given up just four touchdowns in seven other games and two of those touchdowns came on long kickoff return scores (Holyoke, Fitchburg).
Although Marblehead has given up more touchdowns, allowing close to 11 points per game, the Magicians’ margin of victory is 23 points per game.
Marblehead’s power rating is 22.8915. There are only two other teams in the entire state with a higher rating score – – Division 1 powerhouse Franklin (26.1907) and Division 2’s top team, Catholic Memorial (25.3441). 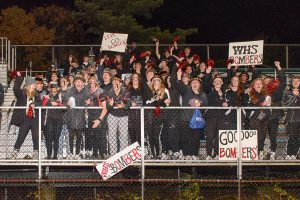 In comparison, Westfield’s power rating is 13.7802. Central’s is 17.7428.
“There’s a reason that they’re the number one seed,” Westfield football head coach Rob Parent said in describing their upcoming opponent, Marblehead. “They’re great. They have an explosive offense. They play really good defense. They have talent everywhere on the field. It’s going to take an effort greater than we had (against Plymouth South) to go win that game.”
Westfield and Marblehead will collide Saturday at Shrewsbury High School. Kickoff is scheduled for 3 p.m.
“We just got to keep going, prepare for them like any other team,” Westfield freshman quarterback Jaxson St. Pierre said. “They’re just another team in our way and we want to get by them.”
Westfield will once again look to their fans to help take their team to another level. Last Friday night, the Bombers fans, comprised of a healthy student cheering section, family members, alumni, and others appeared to outnumber Plymouth South’s home crowd. They brought the noise and they were heard.
“I can’t be any more thankful to be a coach in Westfield where football matters, where sports matter and where guys are willing to drive three hours in the pouring rain to come watch us play,” coach Parent said moments after Friday night’s victory. “I can’t be any more thankful to our fans, our school department, our athletic director, our athletic department, for our Booster Club for getting the fan bus organized, for getting us out here. It felt like a home crowd on our sideline. That was the difference. They were there for us the entire game through the thin and the thick. They were there for us and they got us through this game for sure.”
Said St. Pierre: “Our fans play a big part in our game.”
On paper, this as close to a dream matchup for area high school football fans as possible. But this game will be decided on the field. Will Marblehead continue its magical run or will Westfield steal the show?