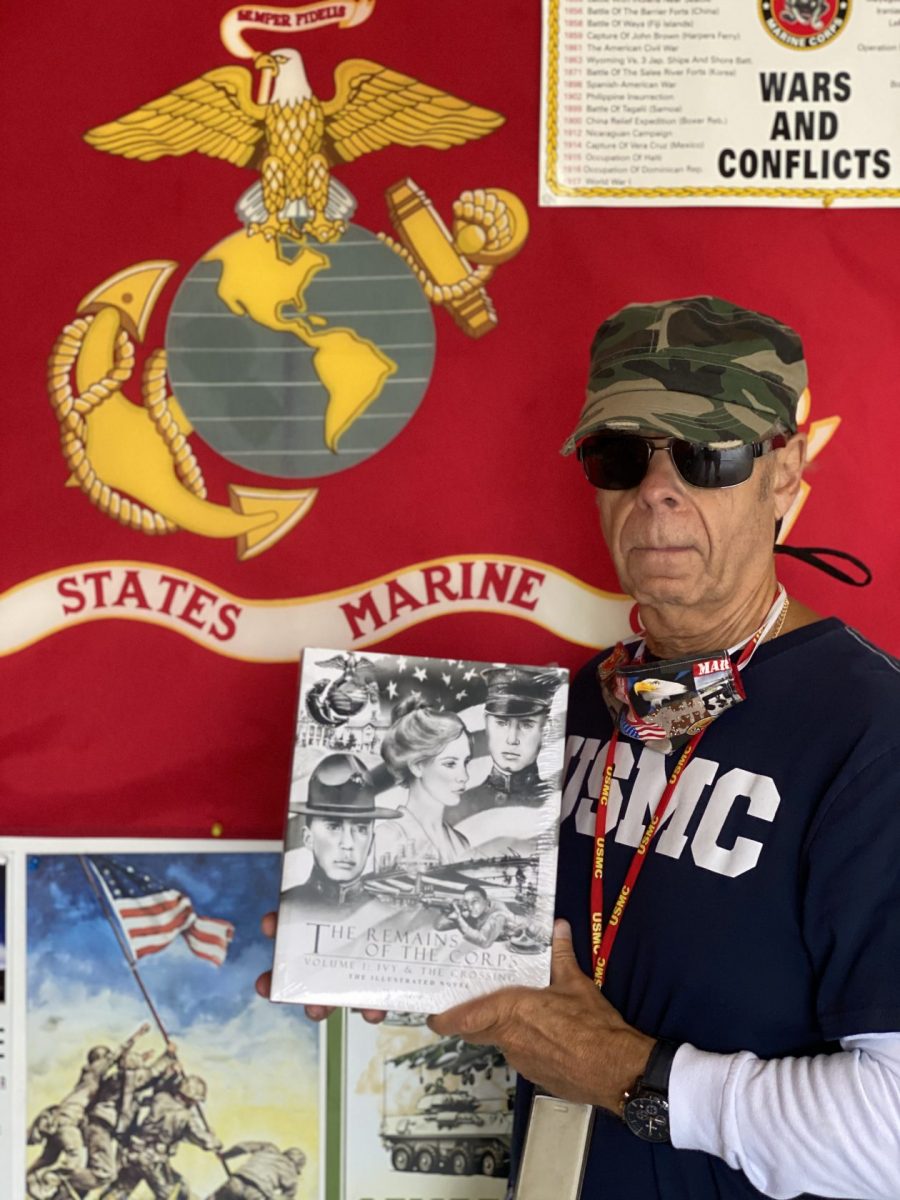 WESTFIELD-The training that Tom Hebert received in the United States Marine Corps served him well on his latest mission – to take readers on a journey through time with a cast of characters who found themselves in extraordinary situations during wartime.

Hebert, an officer in the Marines who served from 1968 to 1971 in Vietnam, recently completed and self-published his novel titled “The Remains of the Corps:  Volume 1, Ivy & the Crossing: The Illustrated Novel.” 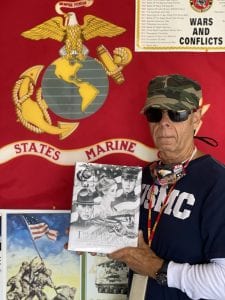 Tom Hebert is seen holding a copy of his new novel in front of his Marine Wall in East Windsor, Conn. (SUBMITTED PHOTO)

Hebert noted he has dedicated the novel to his father, the late William G. Hebert, who was also a USMC veteran. William passed in 2016 and his wife, Bertha Hebert, passed in 2014. They resided in Westfield for more than 25 years, and were communicants of Our Lady of the Blessed Sacrament Church.

Hebert added his dad read most of his drafts for the novel.

“I promised him on his deathbed in 2016 that I would finish it,” said Hebert.

Hebert noted that during his early drafts, he sought input from his father.

“He didn’t critique it too much, but he did question anything he did not understand,” said Hebert. “His feedback gave me insight into how other readers might react, so I revised as appropriate.” 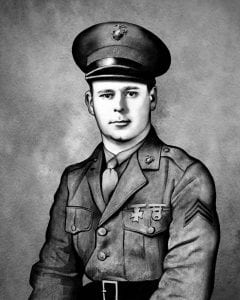 Tom Hebert dedicated his novel to his father, the late William G. Hebert of Westfield, seen in this portrait illustration by Tara Kazmaier.

Hebert, who serves as chief financial officer at Cambridge Credit Counseling Corporation in Agawam, has devoted 10 years of his life to bringing this epic tale to print, with five additional volumes to be revealed in the coming years.

“I am a part-time novelist,” said Hebert, adding, “which makes the 105,000 words in Volume 1 all that much more of an accomplishment.”

Hebert expects to release each successive volume in two-year spans.

“Research takes a great deal of time and I also had to train myself to write fiction,” said Hebert, noting he was up to the challenge and has found the experience “very satisfying.”

“My novel starts in the early 1900’s so I spent a lot of time reading military history, Marine history, and American history,” he said.

The timeline for the Volume 1 novel spans 1913-1917 with detailed descriptions of each character as well as illustrations by artist Tara Kazmaier of Windsor Locks, Conn. She graduated from the Massachusetts College of Art and Design in Boston with a bachelor of fine arts degree in painting. She is using the pseudonym Tara Kaz for the novel. 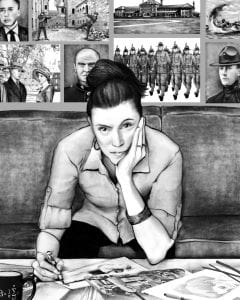 Illustrator Tara Kazmaier in a self-portrait.

Hebert explained that he wrote the novel under the pseudonym Will Remain, a fictional third-generation Marine and Vietnam veteran.

The fictional Remains (an anagram for Marines) are one such family, noted Hebert.

“The saga begins with his grandfather, Kenneth Remain, born in Worcester, and educated at Harvard College,” said Hebert. “They, and other members of their family, are Marines, but there is more to their stories, much more.”

Hebert added he took the time to develop a fictional profile for each Marine, noting it also took three years working with Kazmaier to complete the 134 illustrations and portraits.

“Tara has a real ability to listen, to perceive, and to convert what is in my head to paper,” said Hebert. “She even drew my Dad for the dedication page, using a WWII-era photograph.”

“This project was like a journey,” said Kazmaier. “There were times where I felt like I was on the most direct course, other times the scenic route, and sometimes going the wrong way, but in the end made it to the destination.”

Kazmaier added the characters she drew gave her “joy and inspiration.”

“They all have a story, a background, their own journey throughout the pages of the novel,” she said. “Tom had written such personalized descriptions of them. I wanted to honor them and give them life. Now when I look through the book, I see them as my traveling companions.” 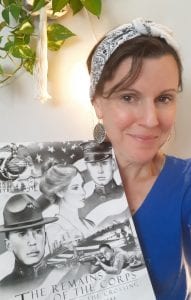 Artist Tara Kazmaier holds “The Remains of the Corps” novel that she illustrated. (SUBMITTED PHOTO)

Hebert said an important element to the book is the patriotism shown by Americans “at the time of the Great War,” and how many individuals were killed, wounded or affected by the war.

“I want people to have an investment in each person who was living in the trenches by talking about their professions before they joined the Marines and why they wanted to serve,” he said.

Hebert noted his single most important motivation behind the novel is his service in the Marines.

“Joining the Marines in 1968, at the height of the Vietnam War, I followed my father’s footsteps,” said Hebert. “I loved the Marine Corps and am forever grateful for it. It shaped me for a lifetime. Writing a six-volume story about Marines is my way of giving back and, hopefully, doing my small part to perpetuate the Corps’ legendary status.”

Hebert said he also came away from his Marine Corps experience with “some survivor guilt.”

“It is difficult to explain, but it has me in its grip,” he said, adding, “I served in Vietnam proudly but I did not fight in any battles or earn any combat awards.”

As part of the launch of Volume II, titled “The Remains of the Corps: Belleau Wood,” Hebert will travel to France in 2021 to walk the Belleau Wood Battlefield which is a major focus of Volume II.

“It will be a pilgrimage of sorts,” said Hebert, adding, “and I plan to drink from the nearby Devil Dog Fountain which is known as a source of strength to Marines.”

Hebert said because of his promise to his father, even when times got tough, he was motivated to get the job done.

“The novel is, first and foremost, an epic literary endeavor,” said Hebert, adding, “I couldn’t pay true tribute to the Corps with anything less.”

As the illustrator, Kazmaier said she was “really drawn” to the amount of dedication and heart that Hebert was putting into the novel.

“His passion for this project was inspirational,” she said.

For extensive details about the book, as well as ordering information, visit www.remainsofthecorps.com or www.egandapublishing.com. The book was printed at the Bridgeport National Bindery in Agawam. 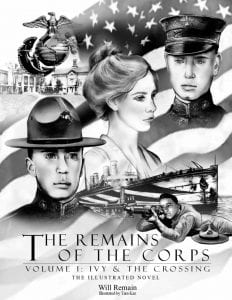