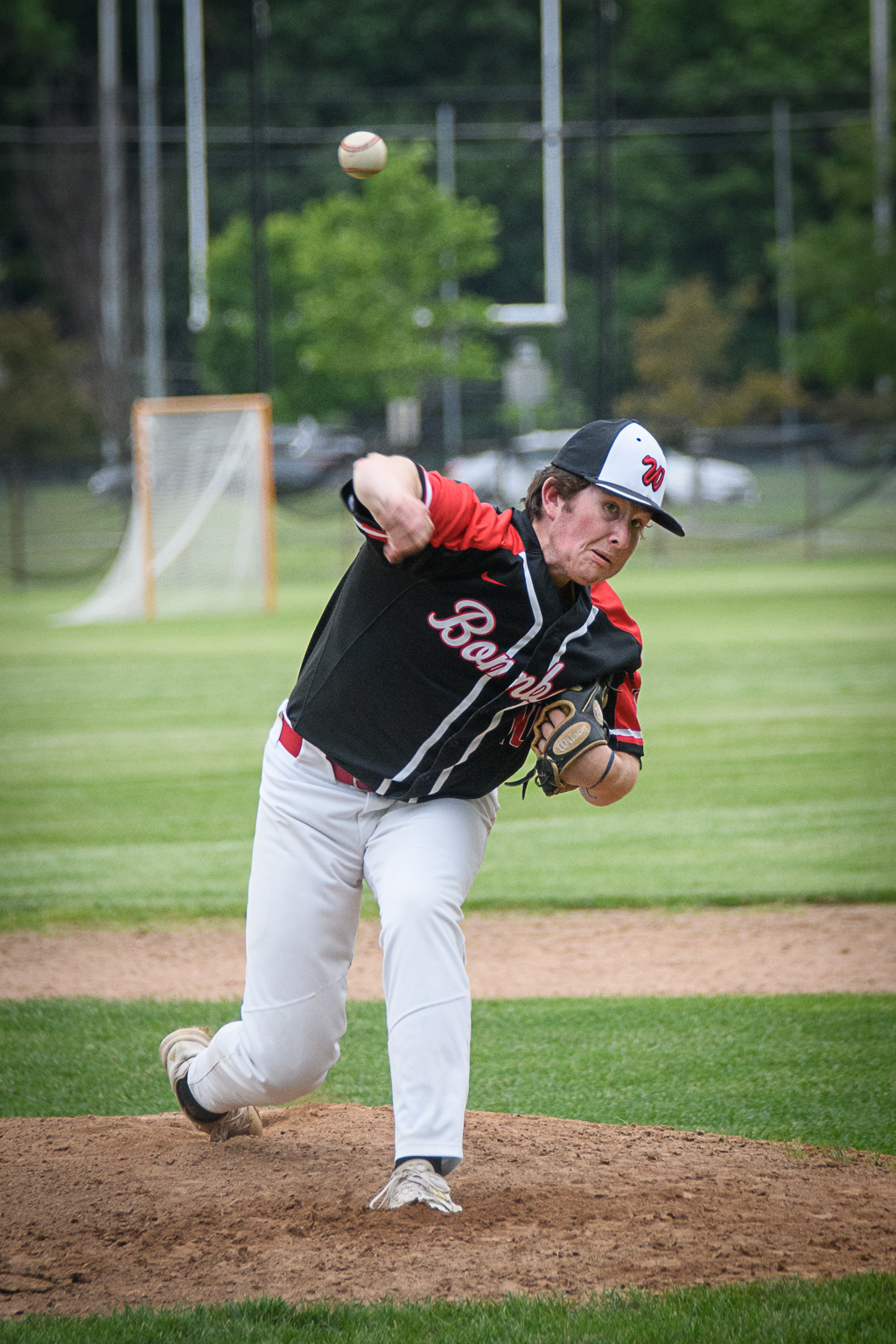 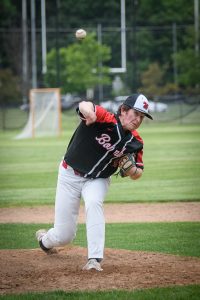 UPDATED 6/13
LONGMEADOW – Westfield High School won the arms race and had enough of a blast to achieve victory in their latest baseball game.
Westfield sophomore starting pitcher Josh Mayo tossed a complete game three-hitter, striking out eight batters in the process, and junior Andrew Florek provided the game-winning hit late in the game as the Bombers escaped Longmeadow with a narrow 2-0 win over the Lancers on Friday.
Florek hit a two-run double, his second of the game, with the bases loaded in the top of the fifth inning.
“Our pitching has been huge so far this year – – that’s what kept us in ball games,” Mayo said. “Our bats showed up here a couple times and we hit when had to.”
Westfield had several opportunities in the early going only to see them go away.
In the second inning, the Bombers loaded the bases with a well-struck line drive single up the middle from Alex LaCourse, and walks from Florek and Dan Provost, but Longmeadow starting pitcher Charlie Calvanese came back to strike out the No. 9 batter to end the threat.
Westfield threatened again in the third inning when Cody Collins reached on a two-out double deep to right field. Collins attempted to score on the ensuing base hit from LaCourse but was gunned down at the plate with a perfect throw from Longmeadow.
The Bombers left another base runner stranded in the fourth. Florek reached for the second straight time in the game, the latter the result of a well-hit double to right center field. Calvanese followed that up with two consecutive fly outs and a strikeout.
Westfield’s persistence with the bat finally paid off in the fifth inning. Mayo singled and stole second base. Collins walked. The base runners advanced on a wild pitch. LaCourse drew a walk to load the bases. Florek remained perfect at the dish, plating two runs with a double to deep right field.
“We were putting hits together, just not collectively,” Florek said. “We eventually found a way to crack (Charlie’s) code.”
Mayo mowed down Longmeadow in the bottom of the fifth, striking out two of the three batters he faced in the inning. He retired the side in the sixth 1-2-3 for his sixth, seventh, and eighth straight outs recorded without allowing a hit.
After Luke Olson (2-for-3) singled to begin the seventh, Mayo retired three straight batters to end the game.
“We’re getting there,” Westfield High School baseball coach Mike Kennedy said. “I think we still have a few missing pieces that we need to put in place.”
Notes: The Westfield Bombers improved to 7-3 with a 5-0 shutout of Minnechaug Sat., June 12. Alec LaCourse went 3-for-4 with a double and run scored. Jake Jachym tossed six scoreless innings of three-hit ball, striking out seven batters. Brian Strange threw a one-inning shutout.

“Cardiac Cats” strike again
Westfield Technical Academy 6, Smith Voke 5 (9 inn.)
Brody Zabielski (2-for-5, 3 RBIs, run) knocked in Josh Sturmer (2-4, 3 runs, 5 stolen bases) in the top of the ninth inning to lift Westfield Tech to a thrilling extra inning victory late Friday. Zabielski also earned the win on the mound for the Tigers, retiring all three batters he faced in the bottom of the ninth.
Andrew Navarro went 3-for-5 for Westfield Tech with three RBIs. Tigers’ Darin Towle, Toby Barlow, and Evan Grant each collected a hit. It was Grant’s first varsity hit.
“We went into the game knowing with a win, we would earn the league title,” Westfield Technical Academy High School baseball coach Bob Eak said. “Our confidence level was high and we wanted some payback.”
Smith Voke handed Westfield Tech a 7-5 loss on May 20. The Tigers were determined not to lose again.
“We came out hot in the first inning and were able to pull it off with a great relief performance by Zabielski,” coach Eak said. “We ask our pitcher to do two things – – throw strikes and get outs. That’s precisely what he did for us.”
Zabielski threw 29 pitches, 27 of them for strikes. Tigers’ Dacota Durkee allowed just three hits, three walks, and five runs (only two of which were earned) and struck out 13 batters in 5 2/3 innings.
“I’m extremely proud of this team and I feel confident going into the tournament that we will continue to pitch well and score runs,” coach Eak said. “We still have to tighten our defense up a little. We’ll work hard in practice until our first tournament game to make that aspect of our game better.”

SOFTBALL
Slack hits, pitches Tigers past Smith
Westfield Technical Academy 14, Smith Vocational 2
Westfield Tech pitcher Alyssa Slack struck out eight batters in tossing a four-hitter and finished a home run short of the cycle, going 3-for-4 at the plate with a single, double, and triple.
Taylor Parker went a perfect 4-for-4 for Westfield Tech with three doubles. Tigers’ Caprice Allen went 2-for-3 with a walk.