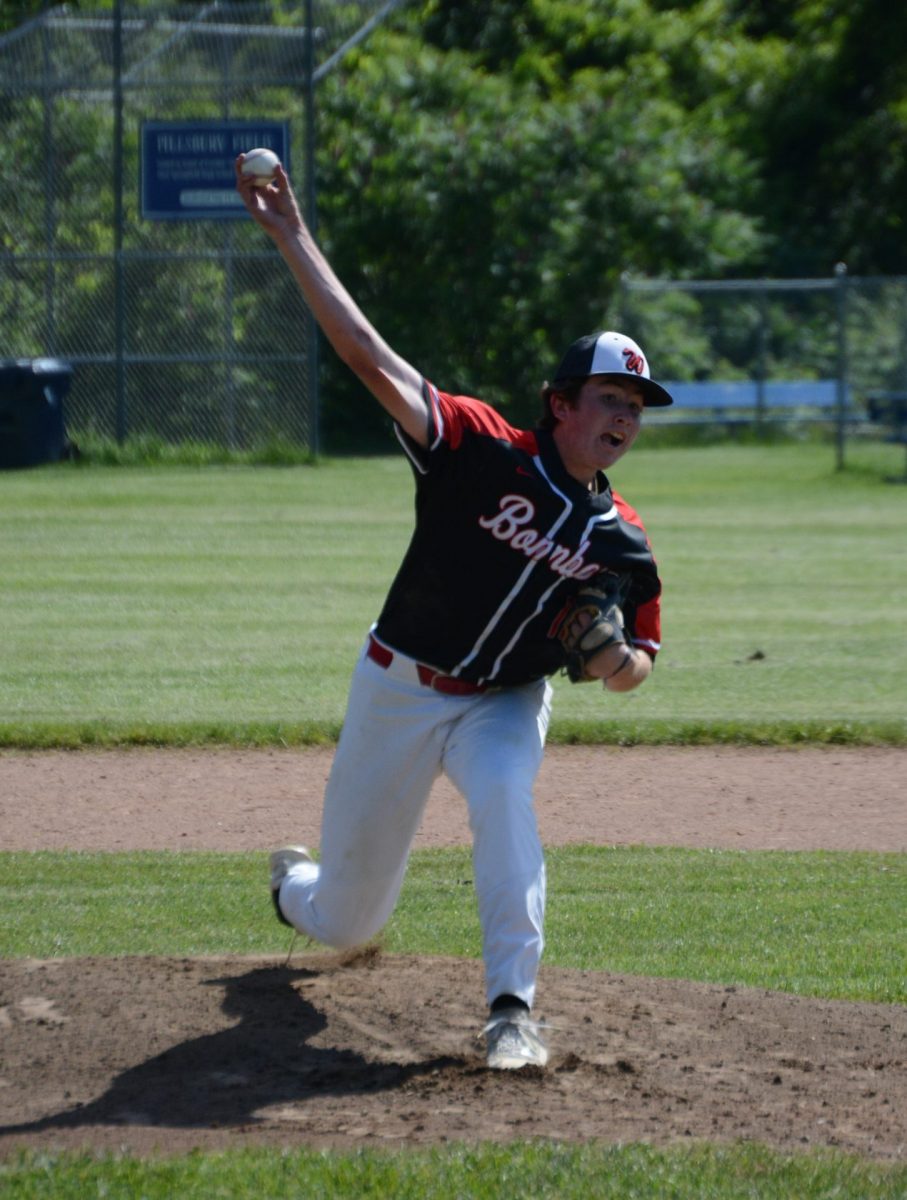 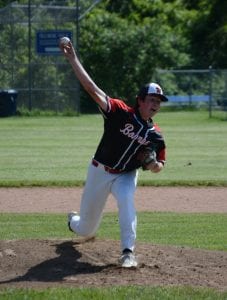 WESTFIELD – Finally.
After falling to East Longmeadow in the 2019 West Division 1 baseball finals, and losing the entire 2020 season to Covid, the Westfield High School baseball team will finally get another crack at winning a championship.
Westfield sophomore pitcher Josh Mayo tossed a four-hit shutout and the No. 6 Bombers upended the second-seeded West Springfield Terriers 1-0 in a West Division 1 semifinal Thursday at West Springfield Middle School.
Westfield (11-4) moves on to face the tournament’s overall top seed, Northampton (13-2), in the D1 title game Monday at Northampton High School. First pitch is at 4 p.m.
“We have been in the Western Mass finals about five times in the past 10 years,” said Westfield catcher Alex LaCourse, who had the game’s biggest hit. “We’re a powerhouse team. If we just bring the same energy we brought today, we’re going to be in states.” 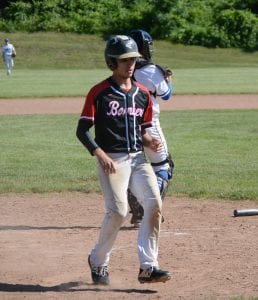 Westfield’s Brennan Jarvis scores the eventual game-winning run during the second inning of a playoff semifinal. Jarvis came on to pinch run for clean-up batter Alex LaCourse, who led off the inning with a triple to deep right-center field. (CHRIS PUTZ/THE WESTFIELD NEWS)

LaCourse provided the biggest hit, a booming triple to right-center field to lead off the top of the second inning.
“(West Side pitcher Bailey Griggs) worked with me with two sliders at the start of it and I sat on fastball,” LaCourse said. “I got my pitch outside, my favorite pitch right there and just drove it.”
Brennan Jarvis came on to pinch run for LaCourse. Jarvis scored when the next batter, Andrew Florek grounded out.
It was one of Westfield’s only three hits off of Griggs. Mayo was dominant in his start, allowing just two West Side baserunners to reach in the same inning twice.
In the first inning, Chris Torres hit a two-out single and Griggs walked before Mayo struck out the No. 5 batter, Aaron Begin to end the threat. Mayo was hit in the lower leg with a hard-hit ball in the fifth inning, but shook off the pain. He remained in the game and retired three straight batters. 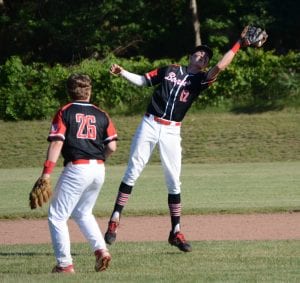 Westfield shortstop Jimmy Cloutier (12) catches the fly ball for the final out of the game. (CHRIS PUTZ/THE WESTFIELD NEWS)

After giving up a harmless single in the sixth, Mayo hit the No. 6 batter, Wislon Berdecia with a one-out pitch in the seventh, and allowed a single to Jose Acevedo. He came back to strike out the next batter and force a fly out in the infield to end the game.
“We’re swinging it real good, throwing good, and had hits when we needed them,” Mayo said.
When it comes to the arms race, nobody is better than Westfield right now. Through three games, the Bombers have shut out the competition by a combined score of 17-0.
Mayo shut out No. 11 Chicopee Comp in the first round of the tournament, 5-0. Bombers senior pitcher Brian Strange threw a five-inning, no-hitter against No. 3 Pittsfield in the quarterfinals, an 11-0 victory. Then, it was Mayo again.
“Brian, Mayo, and pitcher Dave Tirrell have worked hard all year,” LaCourse said. “We get edgy out here and go with it.”
It just could be the edge that puts Westfield over the top. 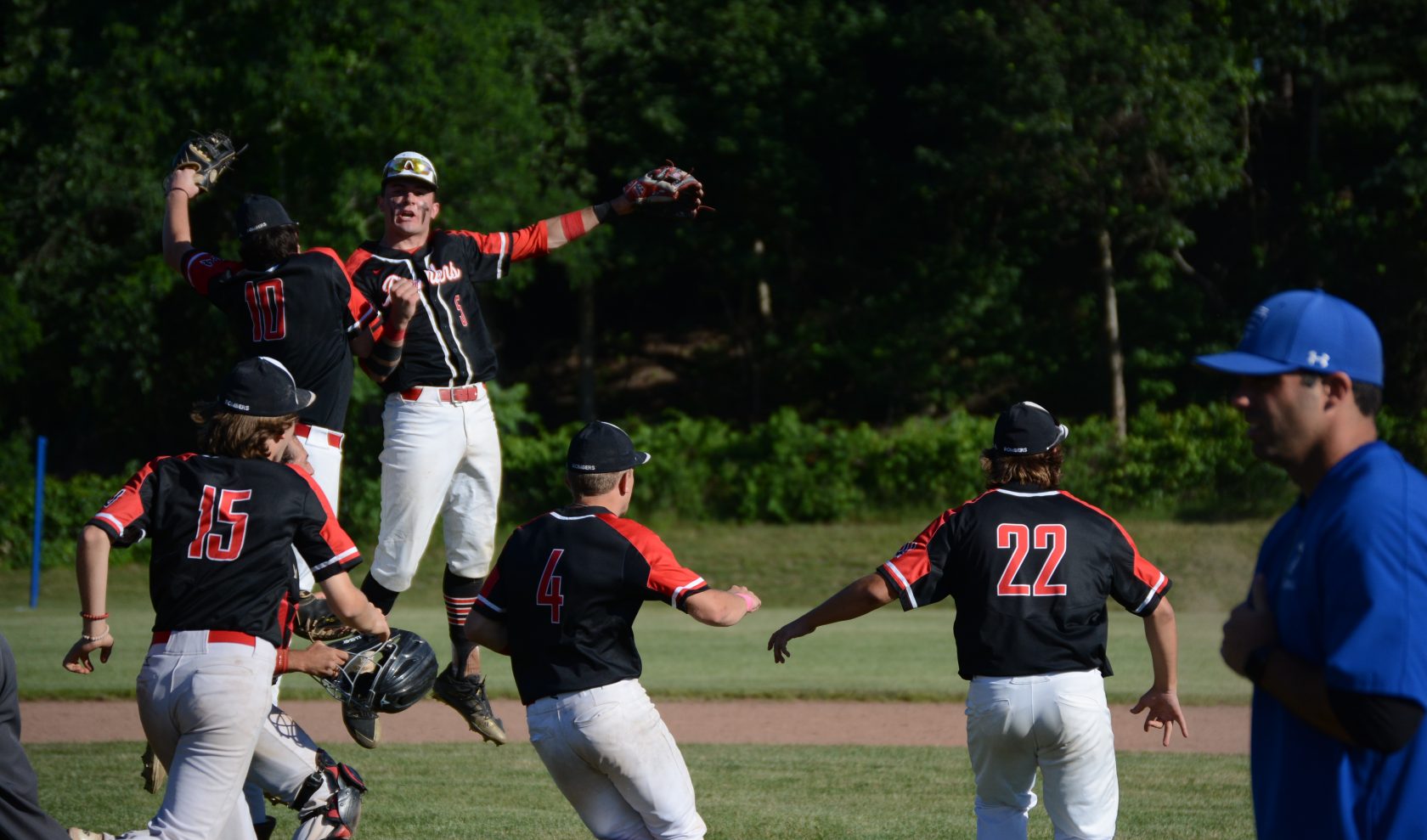